When Angela Alsobrooks, JD ’96, reflects on the legacy of Dr. Martin Luther King Jr., she stands in awe of the way his words and actions remain relevant a half-century after his death. And they resonate strongly with Alsobrooks, the Prince George’s County executive, who says she is driven to carry on King’s work, or to “redeem the dream.” 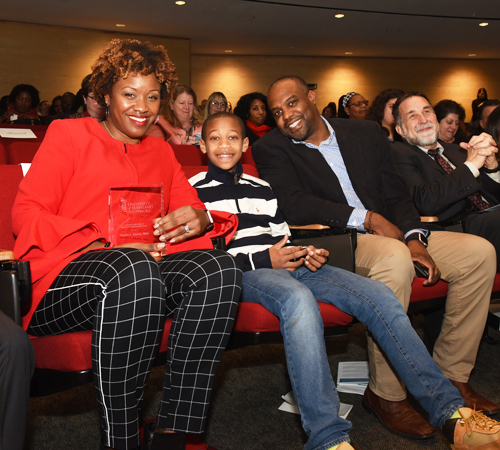 Cherita Adams, MBA, MS, and her family are all smiles after she was recognized with the Outstanding UMB Staff Award

“In his ‘I Have a Dream’ speech, Dr. King talked about this promissory note that America had written to us,” Alsobrooks told a University of Maryland, Baltimore (UMB) crowd of nearly 400 on Feb. 6 as the keynote speaker at UMB’s Dr. Martin Luther King Jr. and Black History Month celebration. “He said you had a right to expect that America’s promise and freedom and certain justices would apply to all of us. And everyone in this room, we have the opportunity in this phase of our lives to make sure that we redeem the dream.”

Alsobrooks challenged the audience to honor King’s legacy, fight discrimination, and advocate for equality and social justice, and to do it with dignity, the way he did. She urged the UMB community — and students in particular as they move toward starting their careers — to help assure that all Americans have equal access to education, health care, and economic opportunity “regardless of ZIP code or family circumstances.”

While recalling King’s history, Alsobrooks recounted her own, both personal and professional. She said her great-grandfather was killed by a sheriff in South Carolina in the 1950s, in a crime that was never prosecuted, and that her family was forced to flee the town and made its way north to Prince George’s County in Maryland. Later, Alsobrooks’ young parents couldn’t afford a college education but were determined that she and her sister get one. She said she faced challenges, overcoming attention deficit disorder to become an ace student who went to Duke University and earned a degree in public policy. And she talked fondly of her great-grandmother, who lived to age 97 and instilled a philosophy she carries to this day.

“She was a sharp, sharp lady. And when anybody in the family complained, she would say, in her Southern way, ‘You know what? If you don’ t like it, then you go further and you do better.’ And that’s what I’ve tried to do in my life and my career — and I wish that she could have seen how it’s turned out.”

University President Jay A. Perman, MD, detailed how it’s turned out in his introduction of Alsobrooks, noting her UMB ties as a 1996 graduate of the University of Maryland Francis King Carey School of Law and her rise from assistant state’s attorney to state’s attorney to first female leader of Prince George’s County — Maryland’s second-most populous county with nearly 1 million people — taking office in December.

“In celebrating Dr. King, we remind ourselves that we are at our best when we stand for what is right, and our guest of honor has made standing for what is right a platform of her career,” Perman said. “She’s outlined a vision for more accountability in Prince George’s County’s public schools, an enhanced quality of life, and strong economic development.”

Perman recounted meeting Alsobrooks a few years ago when they both spoke at a banquet for the Black Law Students Association at Maryland Carey Law. “Although I didn’t know then that she would become county executive, I had a pretty good suspicion that she had much more to do in her career,” Perman said. “And I doubt she’s even halfway done yet.”

The foundation for Alsobrooks’ career in public service was laid at the Carey School of Law. After graduation, she told the crowd, she made a promise to herself.

“When I passed that bar exam, I remember saying to myself, ‘I will never accept a job that doesn’t make me jump out of bed in the morning and doesn’t help other people.’ And God has allowed me to have the kind of work that literally causes me to wake up in the morning with excitement. And I believe my work has been meaningful. I say especially to the students who are here today that if you follow your passions, your gifts will create for you a path and a career that will absolutely blow your mind.”

Larry S. Gibson, LLB, a professor at Maryland Carey Law since 1974, won the Outstanding UMB Faculty Award for his career of promoting equality, justice, and opportunity, including his work in organizing the Black Law Alumni Reunion & Symposium for Carey Law graduates every five years since 2003.

Vanessa Gonzalez-Wright of the University of Maryland School of Social Work was named Outstanding UMB Student for her tireless efforts to advocate for vulnerable student populations and for UMB to be a more affirming place for immigrant students, most recently co-chairing a task force exploring the creation of a multicultural center on campus.

The celebration included two songs — “Rise Up” and “True Colors” — from Vocally Charged, a vocal performance group of middle school students from Green Street Academy, one of UMB’s partner schools in West Baltimore, under the direction of Joseph N. Eldridge.

Alsobrooks concluded her remarks with the words of another African-American pioneer, Harriet Tubman, whom she referred to as “the baddest woman to ever walk the roads of Maryland.” The life of the famed former slave and abolitionist serves as a reminder to never give up in the face of struggles or challenges, Alsobrooks said.

“And remember, too, that Dr. King has given us a beautiful road map to follow. He’s already set out the mission for us: Redeem the dream.”