A faculty member in the Department of Pharmaceutical Sciences (PSC) at the University of Maryland School of Pharmacy (UMSOP) has received a five-year, $1.8 million grant from the National Institute of Environmental Health Sciences (NIEHS) to research the interaction of cadmium with various drugs used in cancer and HIV treatment. Yan Shu, MD, PhD, associate professor at PSC, is leading the investigation with the hopes of improving personalized medicine in the future.

Cadmium is a metal used in the industrial manufacturing of batteries, coatings, and paint. It is also naturally found in the environment in soil, air, cigarettes, and food such as mushrooms and shellfish. 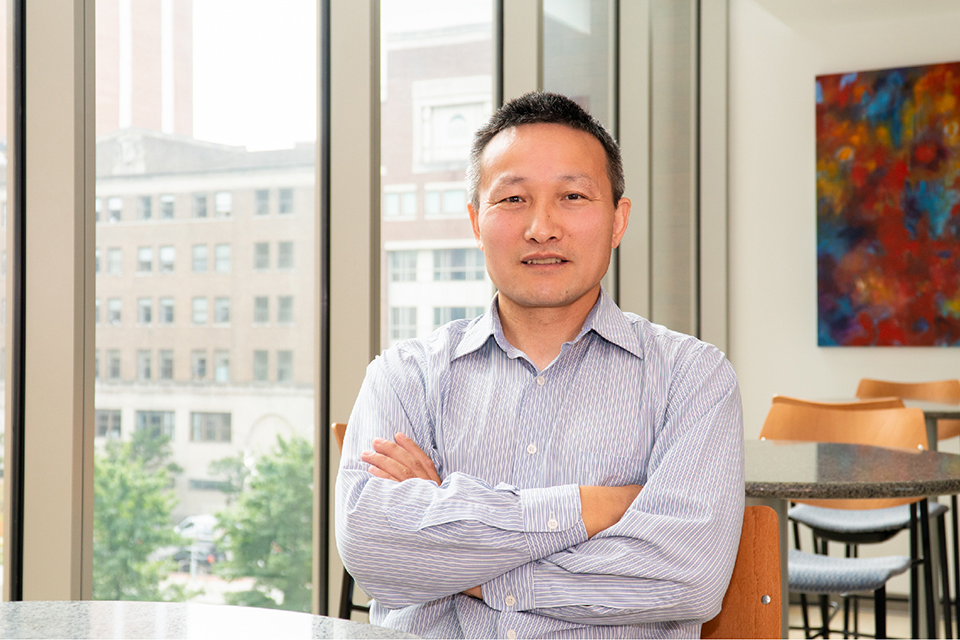 Despite its natural occurrence, increased cadmium exposure is associated with cardiovascular disease, cancer, and diabetes. Once cadmium enters the body — which can occur through food, air particles, or occupational exposure — it accumulates in the kidneys and liver. The body cannot purge cadmium for decades, so it remains in the organs and can eventually cause tissue injuries.

“Although cadmium has already been associated with a variety of diseases, little is known about the effect of chronic cadmium exposure on the disposition and response of the drugs used to treat those diseases,” Shu says.

Shu will study the effects of cadmium in three areas of compounds and drugs. First, Shu and his lab will assess several classes of proteins including organic cation transporters (OCTs), organic anion transporters (OATs), multidrug and toxin extrusion proteins (MATEs), and multidrug resistance-associated proteins (MRPs). The second and third aims include the study of cisplatin, a drug used in chemotherapy, and tenofovir, a drug often used to treat HIV. Cisplatin and tenofovir both have greatly beneficial therapeutic properties but also have adverse effects. For example, both may cause renal injury or nephrotoxicity. Interactions between cadmium and cisplatin or tenofovir are expected to significantly increase the risk of renal injury.

“Based on our preliminary studies, we found cadmium exposure could have a broad impact on drug disposition and response,” Shu says. “Therefore, we want to do further studies to characterize cadmium’s effects in drug therapy.”

“Our hope is that we’ll be able to understand why and how a variety of clinical drugs and their therapies are affected by cadmium exposure,” Shu said. “In the future, if a physician was treating a patient using cisplatin or tenofovir and saw a variation in drug disposition and response, they might consider what role cadmium played and adjust the medication accordingly. That knowledge for certain individuals would be very important to practice personalized medicine.”