Clostridium difficile (C. diff) is an antibiotic-resistant “superbug” that causes life-threatening diarrhea and colitis (inflammation of the colon). It typically affects people who have recently received both medical care and antibiotics. C. diff causes disease by secreting a fleet of toxins that enter and destroy the cells of the colon.

A team led by Roman Melnyk, PhD, senior scientist in the Molecular Medicine Program at The Hospital for Sick Children (SickKids) in Toronto, that includes Hanping Feng, PhD, professor in the Department of Microbial Pathogenesis at the University of Maryland School of Dentistry (UMSOD), and Jacques Ravel, PhD, associate director, Institute for Genome Sciences (IGS) at the University of Maryland School of Medicine, found a drug that can block the effects of the three deadly C. diff toxins without affecting healthy gut bacteria.

This means a more focused and successful treatment of C. diff compared to current antibiotic treatments that can’t target these toxins. 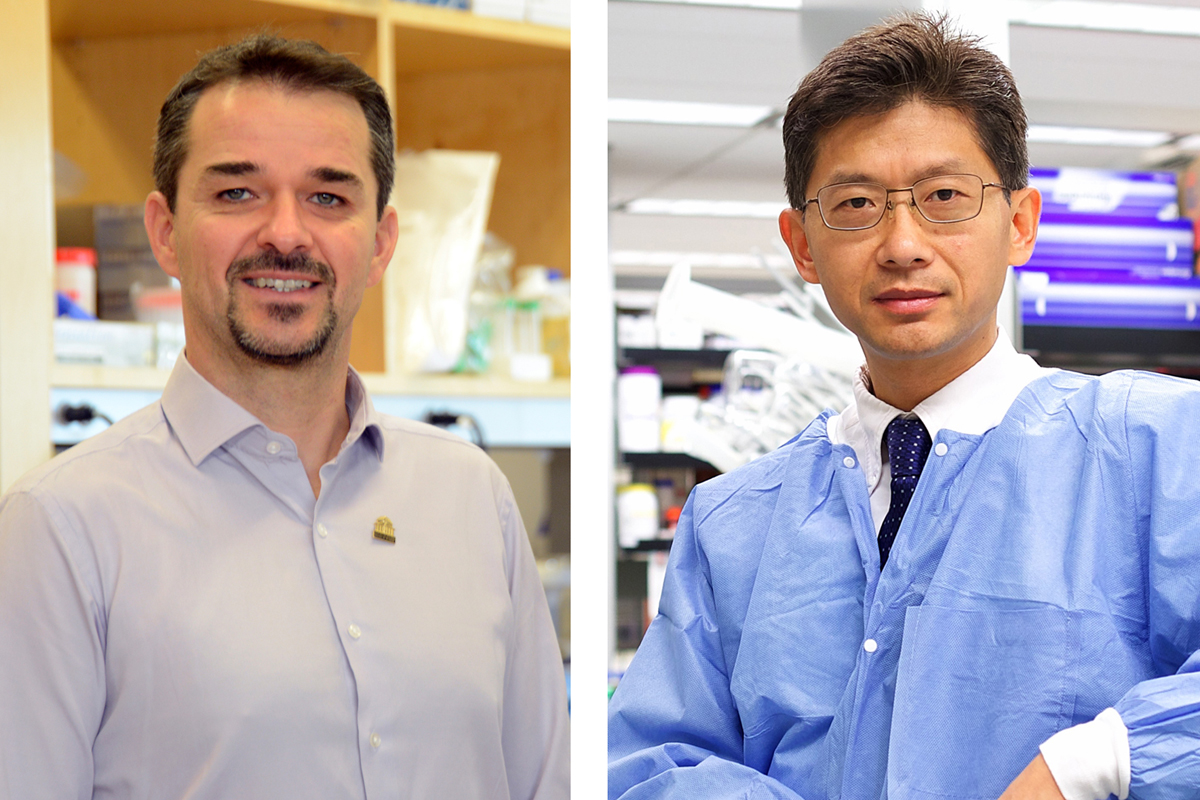 Jacques Ravel, PhD, associate director, Institute for Genome Sciences at the School of Medicine; left, and Hanping Feng, PhD, professor in the Department of Microbial Pathogenesis at the University of Maryland School of Dentistry.

The U.S. Centers for Disease Control and Prevention listed C. diff at the top of the list of the 18 antibiotic-resistant threats in the United States. There is an urgent need for therapies that prevent the symptoms of this disease without disrupting the healthy gut bacteria. C. diff continues to become increasingly more widespread and difficult to treat with traditional means.

SickKids researchers, with the support of collaborators at the University of Maryland, Baltimore, screened thousands of small-molecule drugs to determine if any of them could block the effects of the three deadly C. diff toxins without affecting the gut bacteria. They discovered that a drug called Niclosamide, approved in 1982 for use against human tapeworm infections, protected human colon cells from all three C. diff toxins by preventing their uptake into cells. The team’s findings were published in Nature Communications on Dec. 7.

“C. difficile, commonly thought of as a disease of the elderly, is increasingly being seen in children,” says Melnyk, who also is an associate professor in the Department of Biochemistry at the University of Toronto. “When we embarked on this work, we knew that we needed to find a drug that was safe for humans. Recognizing that it can take over a decade to get a new drug to the clinic, we focused our efforts on old drugs that were already approved for human use.”

Led by Feng, researchers at UMSOD evaluated Niclosamide and demonstrated its efficacy in protecting animals from C. difficile infection. Additionally, says Feng, “Working together with Dr. Ravel’s group at IGS, we demonstrated that, unlike standard treatments with antibiotics, oral Niclosamide did not induce gut microbiota dysbiosis that redeems host susceptibility to C. difficile infection and recurrent disease.”

This discovery could have profound impact on patient care. If these findings translate to humans, this would be the first drug to treat C. diff that is able to block all toxins to prevent disease and disease recurrence without affecting the gut bacteria. By repurposing an existing drug, new treatment can come to market sooner and it can be taken orally because it is an oral pill.

The team will continue to conduct trials to further investigate whether Niclosamide represents a model for non-antibiotic drugs against toxin-producing infectious diseases.

This work was supported by a grant from the Canadian Institutes of Health Research.