The Institute of Human Virology (IHV) at the University of Maryland School of Medicine (UMSOM) announced on Dec. 4 the discovery that DnaK, a protein of the bacterium mycoplasma, interferes with the mycoplasma-infected cell’s ability to respond to and repair DNA damage, a known origin of cancer.

Little or no mycoplasma DnaK DNA sequences were found associated with the tumor, which was fully developed, suggesting a hit-and-run or hide mechanism of transformation, indicating that the damage is done early, but the protein may not be needed once the cancer cells are formed. 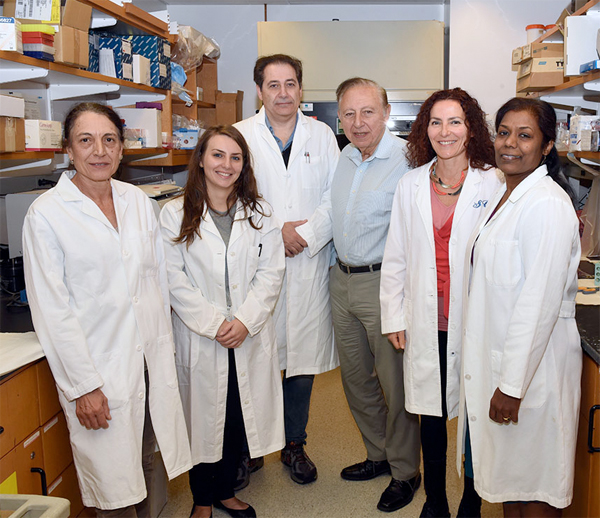 The study was published in the Proceedings of the National Academy of Sciences and suggests that bacterial infections may contribute to far more cancers than previously thought. The announcement was made by Robert Gallo, MD, The Homer & Martha Gudelsky Distinguished Professor in Medicine and co-founder and director, Institute of Human Virology, UMSOM, and Davide Zella, PhD, assistant professor of biochemistry and molecular biology, Institute of Human Virology, UMSOM. Gallo and Zella collaborated with Hervé Tettelin, PhD, associate professor of microbiology and immunology, Institute for Genome Sciences, UMSOM.

“Currently, approximately 20 percent of cancers are thought to be caused by infection, most are known to be due to viruses,” said Gallo. who also is co-founder and director of the Global Virus Network. “Mycoplasmas are a family of bacteria that are associated with cancers, especially in people with HIV. Our work provides an explanation for how a bacterial infection can trigger a series of events that lead to cancer. Of particular importance, the infection did not need to persist and the protein did not need to be continuously present in all cancer cells. The study also provides a mechanism for how some bacterial infections can interfere with specific cancer drugs.”

“We focused on a protein called DnaK, which is part of a family of proteins that function as a ‘chaperone’ for other proteins protecting them from damage or helping them to fold,” Zella said. “However, in this case, DnaK reduces the activity of important cellular proteins involved in DNA repair and anti-cancer-activities, such as p53. Thus, cells infected with mycoplasma would not be able to properly repair damaged DNA, thus, potentially increasing the risk for cancer development.”

The scientists noted that the bacteria can release DnaK and the DnaK enters nearby uninfected cells. The study also demonstrates that by reducing p53, DnaK also can reduce the efficacy of anti-cancer drugs. Thus, mycoplasma infection could not only trigger events leading to the accumulation of DNA damage and oncogenesis in infected cells, but also trigger cancer-causing events in nearby uninfected cells that took up DnaK released from infected neighboring cells.

According to Gallo, “This hit-and-run, or hide, mechanism mediated by a protein common to many cancer-associated bacteria changes how we need to think about infection and at least some cancers. Furthermore, this provides a basis for understanding how infection can influence the effectiveness of some cancer treatments.”

“This is fascinating science with important implications,” said UMSOM Dean E. Albert Reece, MD, PhD, MBA, who also the executive vice president for medical affairs, University of Maryland, Baltimore, and the John Z. and Akiko K. Bowers Distinguished Professor. “We are pleased to see a cross-collaboration between two disciplines here at the University of Maryland School of Medicine. Our Institute of Human Virology’s basic science laboratory research was aided by the School’s Institute for Genome Sciences’ sequencing expertise, bringing the research to full fruition.”