Ashlee Mattingly, PharmD, BCPS, assistant professor in the Department of Pharmacy Practice and Science at the University of Maryland School of Pharmacy (UMSOP), has been awarded a three-year, $2.2 million federal grant to investigate the use in clinical practice of drugs including certain bulk drug substances (active ingredients) that have been nominated for use in compounding by outsourcing facilities.

The research will assist the U.S. Food and Drug Administration (FDA) in its efforts to develop a list of bulk drug substances for use in compounding by outsourcing facilities — a newly-established category of drug compounders under Federal law.

“Compounded drugs serve an important role for patients whose medication needs cannot be met by an FDA-approved drug product, such as patients who have an allergy and need a medication to be made without a certain dye,” Mattingly says. 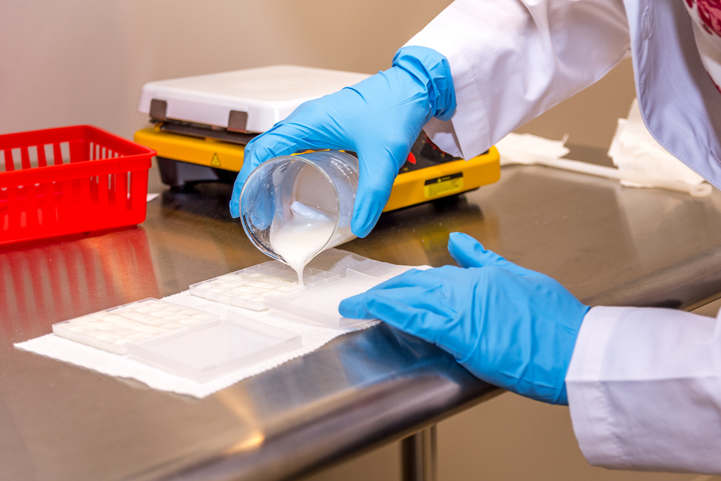 The project will include an in-depth review of clinical practice guidelines, published literature, and other sources focused on bulk drug substances, which can refer to any material that acts as an active ingredient when used to manufacture, process, or package a medication.

In 2012, contaminated injectable drugs that a state-licensed compounding pharmacy shipped across the country caused an outbreak of fungal meningitis that led to more than 60 deaths and 750 cases of infection across the nation. In response to this outbreak, Congress enacted the Drug Quality and Security Act (DQSA) that amended the Federal Food, Drug, and Cosmetic Act to strengthen the FDA's authority to regulate and monitor compounded drugs.

The legislation, among other things, established a new category of compounders known as outsourcing facilities, which are registered with the FDA and operate under the direct supervision of a licensed pharmacist. These facilities can only compound using bulk drug substances if the substance is used to compound a drug on the FDA’s drug shortage list or appears on a list that will be developed by the FDA of bulk drug substances for which there is a clinical need.

Stephen Hoag, PhD, professor in the Department of Pharmaceutical Sciences and director of the Applied Pharmaceutics Lab at UMSOP, joins Mattingly as a collaborator on this project. Hoag explains: “It’s a difficult balancing act with which the FDA has been tasked. The FDA wants to make compounded medications available for the patients who need them, but it must also take certain precautions to help ensure that the medications are compounded properly and not otherwise harmful to patients. We will help the FDA collect information that it will use to make informed decisions about which substances should be used in compounding, as well as which substances should not be used in compounding.”

“The goal of M-CERSI is to bring together researchers from across the University of Maryland to assist the FDA with a wide range of regulatory science issues,” Polli says. “We want its scientists to be best informed when making decisions that will affect patients, providers, researchers, and manufacturers across the country. Through our involvement in this project, we are helping to support FDA's efforts in identifying bulk drug substances for which there is a clinical need.”

The project will include an in-depth review of clinical practice guidelines, published literature, and other relevant sources regarding the clinical use of drugs containing certain bulk drug substances. The project also will involve outreach to medical specialty groups, medical experts, and specilists in the relevant fields. Examples of substances to be evaluated are alpha lipoic acid, which is a supplement often used by individuals with diabetes and peripheral neuropathy, and glycolic acid, which is a substance used to treat conditions affecting the skin, such as scarring and hyperpigmentation.

Mattingly and collaborators will leverage their individual expertise in pharmacy practice and pharmaceutical sciences, as well as their extensive outreach to medical experts, to understand use in clinical practice of more than 200 substances. Their findings will inform the FDA in its decisions regarding each substance.

“This project is really about learning as much as we can about each substance that has been nominated for inclusion on FDA’s list of bulk drug substances for which there is a clinical need,” Mattingly says. “Our goal is to support FDA's efforts to preserve access to compounded drug products that meet individual patients' medical needs.”