The threat of rain did not stop a night of food, music, and a special appearance from McGruff the Crime Dog as the University of Maryland, Baltimore (UMB), its police force, its Community Engagement Center, and its West Baltimore neighbors rallied together to celebrate National Night Out.

Despite the dark, ominous storm clouds looming overhead, around 200 people gathered on the University of Maryland BioPark lawn Aug. 7 in an effort to strengthen relationships between the police and the community with a free cookout. The event was a momentous occasion for all participants as the UMB Police Force’s new chief, Alice Cary, MS, was there to welcome everyone. (View a photo gallery and see video below.) 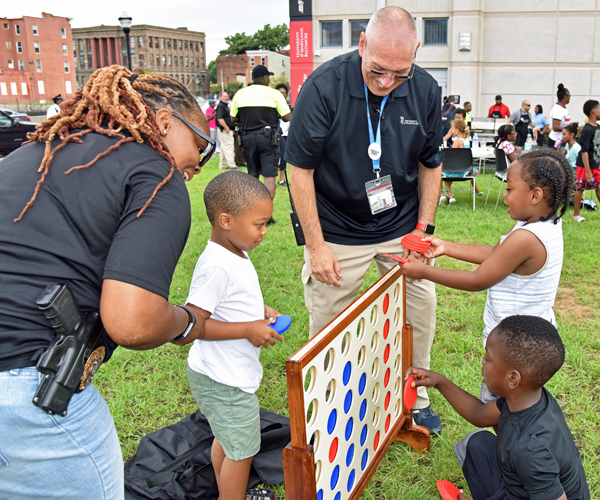 “It’s great to see the turnout and to see our officers engaging with the community,” Cary said.

National Night Out is an annual event that takes place nationwide on the first Tuesday of August. Millions of communities across the country participate in National Night Out with block parties, parades, cookouts, and various other community events and UMB was no exception. Lt. Thomas Leone put down his police gear for the night and instead held a spatula as he and his fellow officers grilled hot dogs and hamburgers for members of the community.

“It’s all about community engagement,” Leone explained. “We’re here to help strengthen our community and show them that we’re all in this together.”

Meanwhile, other members of the UMB Police Force (UMBPF) brought their families to the event and engaged community members of all ages in outdoor games, dancing, and face painting.

“I think it’s a good thing for the community to get involved with the officers,” said Nancy Hunt, a Poppleton resident. “They are the ones who help us in our community and it’s nice to get to know some of them.”

Underneath the games and entertainment of National Night Out lies a much deeper objective. The event promotes police-community partnerships and neighborhood camaraderie to bolster relationships and promote a true sense of community.

“It’s about building trust between police and the community that we serve, so people can see what’s behind the badge and see us as individuals,” Cary added.

In the past, UMB has held National Night Out at the SMC Campus Center to encourage UMB students to attend the festivities. As Cary pointed out, the event is all about building a strong relationship with the community, which is why Mary Phelan, senior media relations specialist in UMB’s Office of Communications and Public Affairs, suggested that the University police streamline community engagement by partnering with UMB’s Community Engagement Center (CEC) and organizing National Night Out in August.

The CEC, located in the Poppleton neighborhood, adjacent to campus, provides direct health, employment, legal, and social services to West Baltimore residents and works with them on neighborhood-strengthening advocacy projects.

“The CEC has a great relationship with our neighbors in [West Baltimore], and this was a great way for the CEC and UMB police to partner up on our first of hopefully many more events,” Valis said.