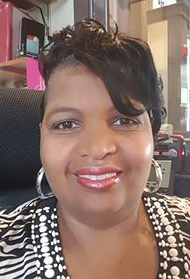 Police Communications Supervisor Shawnta Privette takes pride in supporting her team and supporting their career goals and growth. Over the past 10 years, she's overcome huge challenges and celebrated many accomplishments. To many, Privette is a multi-tasker extraordinaire.

Privette first became a communications supervisor with the Baltimore City Police Department (BPD) in January 2010. At the time, she was undergoing chemotherapy and surgical treatment for stage 3 Hers2+ Breast Cancer.

"I initially declined my promotion due to my medical treatment," says Privette. "However, Major Roper encouraged me not to decline the promotion because I was going to be around for a long time." She was promoted to supervise 56 dispatchers.

In February 2016, Privette joined the University of Maryland, Baltimore Police Department. As a supervisor, she discovered her passion for encouraging, training, and managing others. "I wanted to develop their skill set and cultivate their greatest potential."

Privette has been recognized for many of her achievements. As a police dispatcher, she received a Medal of Honor from BPD for her life-saving efforts after an officer was shot in the line of duty. In 2013, she received an Outstanding Service Plaque from the Maryland Emergency Number Association and Emergency Number System Board.  In 2019, the University of Maryland, Baltimore Police Department (UMBPD) awarded Privette and her Police Communication Operators a Unit Citation.

At UMBPD, Privette helped to implement a new Computer Aided Dispatch (CAD) system in January 2020. "I have worked in communication since 1998 and always benefited from the end product of CAD," she says. "It is a great honor and privilege for me to assist with customizing the CAD system to support the needs of this agency."

Police Communication Operaters at UMBPD have a huge amount of responsibility: call-taking, dispatching, camera monitoring, alarm monitoring, transmitting on the radio, and card access. As their supervisor, Privette manages multiple resources, which has given her a better appreciation and understanding of the Police Communications Center.