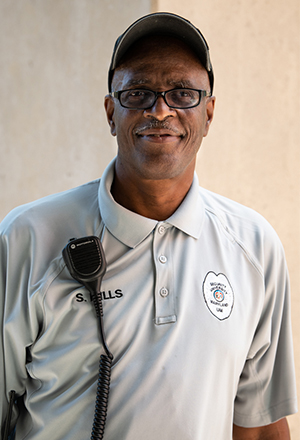 His hat might say “Security,” but Steven Mills describes himself as a public safety officer — “because that’s what we do! We interact with the public.” Now in his 11th year with UMBPD, Mills says this job was a natural fit for him.

“My relationship with people is my biggest achievement, my greatest accomplishment,” Mills says. “When they leave my presence, they feel better about whatever it is we talked about.”

Mills makes a point to talk with people wherever he goes, and he likes to encourage UMB students to find harmony and balance in their day as they deal with the strict deadlines and vast pressures of school.

In June, Mills was at the School of Dentistry when a woman had a medical emergency. He leaped into action, calling UMBPD dispatchers and providing critical life-saving information. Cpl. Eugene Douglas arrived on the scene, performed CPR, and used the automated external defibrillator (AED) until paramedics arrived. The woman survived, and Mills credits Douglas’ quick action with saving her life.

Mills is humble. He takes no credit for his quick action that day. “There’s always someone to help,” he says.

When asked about his biggest challenge, Mills gave the same response as his favorite part of his job —talking with people. “It is a challenge, but it’s not a negative challenge,” he says. “They have confidence in you and how you help them. We need to listen.”

For new students, Mills offers this advice: “Learn the campus, not just where you’re going.” Get off-campus, too, says the Baltimore native. By exploring all the city has to offer, it will introduce you to the better half of Baltimore, and not just what the news represents.

Outside of work, Mills likes to spend time with close, lifelong friends. A Ravens fan and music aficionado, he was an athlete when he was in school. What kind of athlete? “A good one!” He participated in the Penn Relays, the oldest and largest track and field competition in the United States, and remembers how excited his mother was to see him run on TV. Mills also wrestled (and was team captain) and played football and baseball.