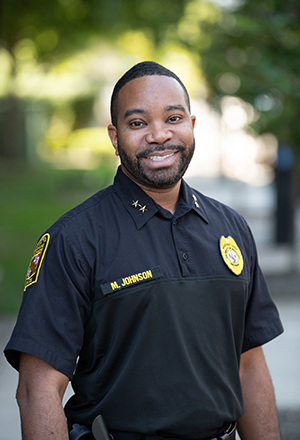 Acting lieutenant Matthew Johnson always wanted to be a police officer. A little over 12 years ago, he became an officer at UMB.

“When everything is going wrong, people look to us to fix the situation,” Johnson says.

Johnson has seen a lot over those 12 years. He worked during Baltimore’s civil unrest following the death of Freddie Gray in April 2015. During that time, Johnson worked to keep the campus safe in the midst of turmoil. UMBPD officers worked long, difficult hours to ensure the safety of UMB students, faculty, and staff.

Once, Johnson would have talked about an arrest or enforcement action as his greatest achievement as an officer. Now, he says launching the Community Outreach and Support Team (COAST) and seeing the work it does to build great relationships with the community is what makes him most proud.

“So many people, especially in Baltimore, have a negative perception when it comes to police,” Johnson says. “I love being able to show them that we are normal people.”

He hopes new UMB students, faculty, and staff will engage with the officers they see on campus. While UMBPD shares safety tips online and on social media (@PoliceUMB), an officer on patrol is your best resource for advice and information, he says.

Johnson, who was active duty in the Marine Corps before joining UMBPD, works around the clock to make a difference on campus and in his community. As lieutenant, he hopes to turn UMBPD’s patrol services into an example of policing success.

“We aren’t too far off, and we have excellent men and women who are leading the charge,” Johnson says. “I want us to set the standard nationwide. It will take some time, but I know we can achieve it.”

Goals like these led to Johnson being named one of the International Association of Chiefs of Police’s “40 Under 40” award winners in September 2019. The award goes to individuals who demonstrate leadership and exemplify deep commitment to the profession. Johnson will be honored in a ceremony in Chicago next month.

Outside of work, Johnson loves motorcycles, race cars, and classic hot rods. He’s also a mechanic in the Maryland Air National Guard, where he works on big trucks, cars, forklifts, and more. He says he loves to fix and build things, including a few of his own motorcycles.