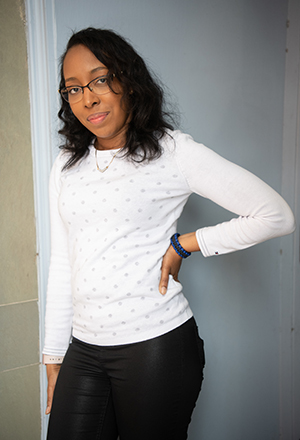 Over the past four years, project management specialist Latoya Anderson has helped to bring the University of Maryland, Baltimore Police Department (UMBPD) into the 21st century. “I felt the department was a little behind on the times,” she says. “I wrote a proposal to go electronic … and we began the process of saving trees.”

In addition to helping UMBPD to go green, Anderson helps the department in a variety of interesting ways. In 2017, she participated in an active assailant training at a police training facility, playing the role of a victim. These training scenarios allow officers to practice and perfect their response. Adding actors makes training scenarios seem more realistic and further tests officers’ skills.

“It was great being a part of the ‘action’ and being able to watch our officers get into police mode,” Anderson says. “I was able to see them in a different element outside of patrolling our campus and greeting students.”

Anderson works hard and hopes to one day mentor future successors. She encourages new UMB students to make their mark on the world and to “be the change you wish to see in the world,” a quote from Gandhi.

Outside of work, Anderson enjoys traveling with her two daughters and introducing them to new things. She considers herself a “history junkie” and loves learning interesting and fun trivial facts.