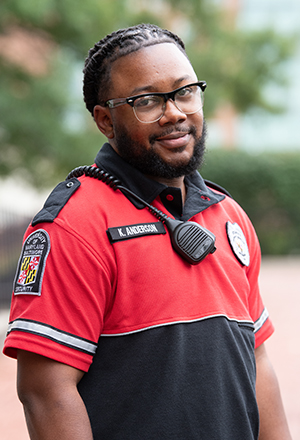 For Security Officer Kevin Anderson, positivity is the name of the game. Whether he’s escorting an elderly community member across a busy street, making jokes, or signing his emails with “THE Kevin Anderson,” the security officer makes it his mission to put a smile on the faces of those around him.

Anderson joined the University of Maryland Baltimore Police Department (UMBPD) nearly five years ago. “I did it to help change and affect the lives of others in a positive manner,” he says. “I wanted to do something bigger than myself.”

In August, Anderson did just that. Seeing a person unconscious and not breathing, Anderson transmitted to UMBPD dispatch critical details that ultimately saved the person’s life. He earned a commendation from Chief Alice K. Cary, MS, for his good work.

Anderson is proud of moments like these. At work, he regularly comes across people who have health issues, are homeless, lost, or afraid.

“In those situations, I try to be attentive, stay calm, levelheaded, and be an active listener,” Anderson says. In the future, he’d like to continue to help the community as a law enforcement officer or an emergency medical technician.

Outside of work, Anderson likes to watch movies, hang out with friends, and travel.