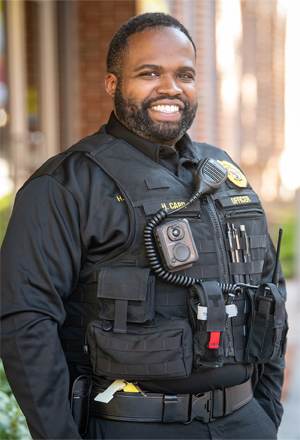 For Pfc. Harold Carr III, policing runs in the family. Carr’s father, grandfather, and uncle were police officers. “I grew up seeing how exciting and rewarding it was for them, so I decided to join.”

Carr joined the University of Maryland, Baltimore Police Department in early September. In his previous career, Carr remembers helping his first student, who was having a seizure. He was able to provide aid and make them feel comfortable during a medical emergency.

Another day, Carr was the first officer to the scene of a serious call. He was alone and had to apply everything he was taught in the academy while remaining levelheaded. He says the situation showed him that he could handle anything and that he made the right career choice. However, being an officer is not without its challenges.

“You don’t know what type of day you’ll have and even if you’ll make it home,” Carr says. “It can be hard not to carry that stress with you.”

Carr tackles the stress of the job by talking with fellow officers, his family, and girlfriend. He also likes to run, play basketball and video games, and travel. Carr says he also loves Dragon Ball Z and The Weeknd.

In the future, Carr aspires to become a K9 officer and work in an investigation unit. “I love figuring out why and how something happened,” he says.

Carr also hopes to form partnerships with schools and local youth groups to grow relationships within the community. “I like to speak with the youth and show them that officers are normal people and can be their friend.”