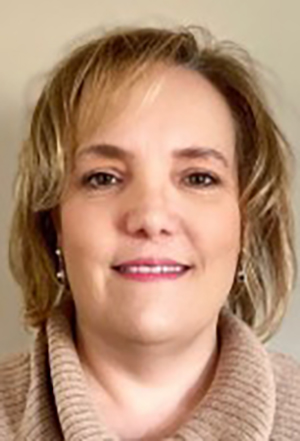 Michelle Hart loves to take on a new challenge. She joined the University of Maryland, Baltimore Police Department (UMBPD) this summer in a new role as Clery Coordinator. Hart also took on this responsibility in her previous role at a small private college in Southwest Pennsylvania.

"(Clery) came under other assigned duties when nobody wanted it," she laughs. "I was the only one excited for a challenge."

In her new role, Hart is responsible for helping to coordinate the vast amount of data and resources needed for UMB to be in compliance with the Clery Act. It requires a tremendous amount of work, but Hart is up for the task. In fact, Hart has actually met Connie Clery, mother of Jeanne Clery, after whom the Clery Act was named!

"My favorite part of this role is knowing that we are making the campus safer for everyone - students, faculty, staff - even our community benefits!" says Hart.

Coming from a rural area, Hart says moving to a new state and a large and diverse university felt daunting. But Hart was not deterred. "I get along by asking a lot of questions and relying on the kindness of my coworkers," she says. "So far they have not failed me!"

As she gets to know Baltimore, Hart encourages new students at UMB to do the same. "Get to know the area and listen to your peers," says Hart. "Be aware, but don't be scared. There's a lot of nice people and things to see and do here."

Hart loves working with work-study students; at her previous university, she even called them "her kids." She aspires to one day attend school for a dual Public Safety/Policy and law degree.

Outside of work, Hart is an avid Steelers fan, just like Interim Chief Leone! She likes to play with her dogs, read, kayak, ski, and snowboard. Hart also loves to travel and has visited 32 countries (it would be 34, if not for COVID-19). Hart has a daughter ("she's my sidekick for almost everything") and her favorite holiday is Halloween. She loves to meet people and hopes you'll stop by the Pine Street Annex to say hi - safely, of course.