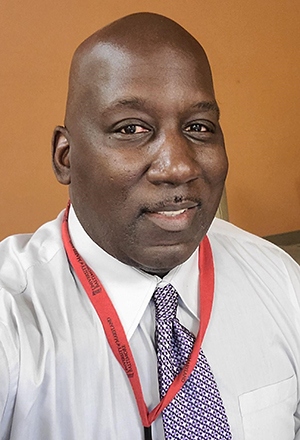 As one of the newest police officers at the University of Maryland, Baltimore Police Department (UMBPD), PFC. Donas Scott is ready to make a difference in the community.

Scott served with the Baltimore City Police Department for 21 years before joining UMBPD. He received an award for arresting a burglary suspect who burgled three different businesses in Little Italy. He's seen and experienced many things as an officer.

"My favorite part of being an officer is having the opportunity to engage with the community and make positive change," says Scott. "I'm always looking to expand my knowledge."

Scott says one of the biggest challenges he faces as a police officer is racial bias. In a time of nationwide tension between police officers and the communities they serve, Scott believes in communication and education programs to build bridges - something the UMBPD has been doing for years through its Community Outreach and Support Team (COAST). For their work, COAST received the Governor's Award for Outstanding Proactive Crime Prevention in 2019.

Outside of work, Scott likes to spend time with family, travel, and play sports.