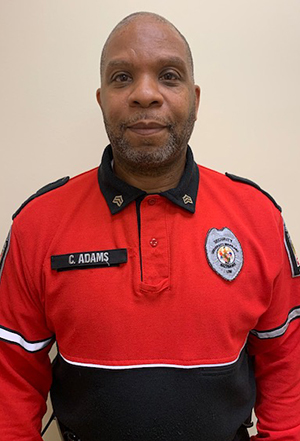 Security Supervisor Chauncey Adams, Sr. enjoys having fun, but he believes in getting the job done. Adams has worked in security since 1985, but came to the University of Maryland, Baltimore (UMB) for a better opportunity. Now, he's spent 15 years as a security officer at UMB and 12 years as a security supervisor.

"I've assisted the police in making several arrests," Adams says. "I've helped to save staff from being hurt."

Over the years, Adams has watched new officers come in and helped them to accomplish their personal goals. He's proud to be a security supervisor and enjoys the positive accolades from his coworkers.

Adams encourages new students and employees to engage with police and security.

Outside of work, Adams is an avid bowler. He continues to mentor young officers and hopes to gracefully retire in a few years.