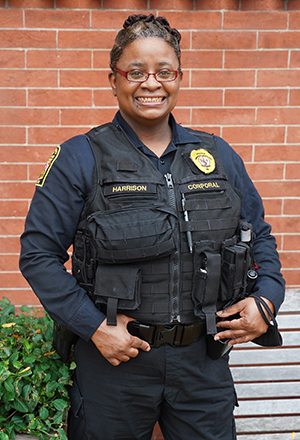 The first thing you need to know about Cpl. Adrienne Harrison: "I'm a fun person," she says. "People enjoy being around me and know I'm a caring person with a big heart." In her 15 years with the University of Maryland, Baltimore Police Department (UMBPD), Harrison has enjoyed helping people, talking to the community, and keeping them safe.

Harrison has been an officer for almost 22 years. She started as a correctional officer in April 1999. In August 2005, she joined the UMBPD as an administrative assistant. Soon after, she attended the police academy and graduated from the Maryland Police and Correctional Training Commission in June 2006.

"I became an officer to make a difference in people's lives," Harrison says. "I want to be a positive role model. I want my family and friends to see how you can rise up regardless of where you came from."

In fact, Harrison says helping people is her greatest achievement on the job. Whether someone is in need or just doesn't know what is expected of them, Harrison steps up to help - not just with policing, but with new computer systems as well!

Harrison faces a number of challenges on the job, including working with people in crisis. In some instances, people can be combative or abusive. "I treat each person with respect regardless of how they may treat me," Harrison says. "I have found if you keep showing respect and keep your tone down, people tend to listen to you. If you rise to the same tone as them, nothing will get accomplished."

UMBPD also works with the Baltimore Police Department (BPD) to assist persons in crisis, including mental health and substance use concerns. Through the Law Enforcement Assisted Diversion (LEAD) program, UMBPD and BPD provide resources and help to people in crisis so they get the help they need rather than face arrest.

Harrison hopes to complete the deferred retirement option plan (DROP) in 5 years, and then would like to have her own business.

Outside of work, Harrison enjoys spending time with her family and loves taking her youngest son and grandchildren to evens. She also likes cooking, watching movies, visiting amusement parks, and going to the zoo and museums. She hopes to soon complete her bachelor's degree in Criminal justice (just six classes left!) and aims to move up in a position within UMB.