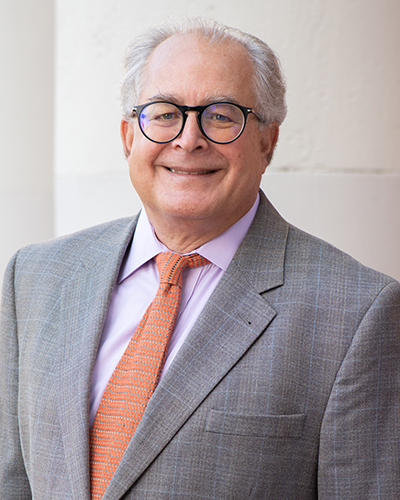 Go to the website of KaloCyte, Inc., and you’ll be greeted by big, bold letters proclaiming, “DEVELOPING A SOLUTION FOR WHEN BLOOD IS NOT AN OPTION.” This is fitting, because KaloCyte is working on a big, bold project: to develop ErythroMer, a dried, bio-inspired artificial red blood cell designed to help clinicians treat life-threatening blood loss when red blood cells are unavailable, undesirable, or in short supply.

The company is an outgrowth of the research and vision of Allan Doctor, MD, a professor in the Department of Pediatrics and co-director of the Center for Blood Oxygen Transport and Hemostasis (CBOTH) at the University of Maryland School of Medicine (UMSOM). Doctor co-founded KaloCyte in 2016 at the Washington University School of Medicine in St. Louis, then moved his research and company to UMSOM and the University of Maryland BioPark three years later.

“ErythroMer is a first-in-class, bio-synthetic artificial red blood cell that can be freeze-dried, enabling long shelf life at ambient temperature, and easily reconstituted — just add water,” said Doctor, who also is KaloCyte’s chief scientific officer and a member of its Board of Directors. “This can be administered in field settings when perishable donor blood is unavailable, like at an accident scene or en route to the hospital.

“I was contacted by Dipanjan Pan, a bioengineer who had designed a red blood cell-shaped nanoparticle — about 1/50th the size of a red blood cell — that could be used to sheathe purified hemoglobin and prevent the safety problems with prior designs,” Doctor said. “We started work on the ErythroMer design in 2010, received our first funding in 2012, demonstrated in vivo proof of concept in 2015, and founded KaloCyte in 2016. We have now successfully navigated a pre-investigational new drug [IND] application filing and meeting with the Food and Drug Administration. We anticipate submitting our formal IND application and initiating human trials within the next two years.”

For his work with KaloCyte, Doctor was named the University of Maryland, Baltimore’s (UMB) 2022 Founders Week David J. Ramsay Entrepreneur of the Year, receiving word of the honor from UMB President Bruce E. Jarrell, MD, FACS, in a phone call over the summer. The award name recognizes the late Ramsay, DM, DPhil, who was UMB’s president from 1994 to 2010 and boosted the University’s research profile and collaboration among academic and industry partners during his tenure.

“When President Jarrell called, I was on vacation with my family in Nova Scotia and had just spent the morning at the Alexander Graham Bell museum on the Cabot Trail,” Doctor said. “I was feeling pretty humbled and inspired by the breadth of his creativity and impact. This UMB recognition intensified that feeling, particularly after considering the legacy of Dr. Ramsay and previous awardees, whom I admire greatly.”

“When he joined the School of Medicine to lead its new Center for Blood Oxygen Transport and Hemostasis, Dr. Doctor not only brought along significant funding supporting his research, he also brought his entrepreneurial spirit and startup company, KaloCyte, to the University and the BioPark.

“The relationship between CBOTH and KaloCyte is a shining example of how entrepreneurial faculty can advance research while also moving science out of the lab and into the marketplace,” Hughes added. “As the team at CBOTH advances ErythroMer and other novel technologies, KaloCyte is right there as a partner that can develop pragmatic therapeutics for the marketplace.”

Pan, MSc, PhD, who is the Dorothy Foehr Huck & J. Lloyd Huck Chair Professor in Nanomedicine at Penn State University, a KaloCyte co-founder, and its chief technology officer, praises Doctor for his leadership and says his colleague’s commitment to research and KaloCyte’s mission is “unwavering.”

“Allan is one of the world’s leading transfusion medicine researchers,” Pan said. “The collaboration we had to develop a synthetic oxygen carrier was a great success, and we got him interested in the emerging field of nanomedicine. To strategize the company’s developmental path and eventual clinical translation, he works closely with the company’s leadership. His best traits as a researcher are his analytical mindset and deep understanding and knowledge in the area of red blood cell physiology.

“Allan is an exceptional leader,” Pan added. “As well as driving the development of KaloCyte’s lead agent, ErythroMer, he executes on many levels of the organization by setting policies, enforcing standards, and monitoring those already in place. Allan is the most deserving person I can think of to win the UMB Entrepreneur of the Year Award.”

Doctor was drawn to UMSOM by the school’s Special Trans-Disciplinary Recruitment Award Program, which recruited teams of talented physicians and scientists from 2017 to 2020, with the goal of significantly catalyzing the school’s focus on accelerating discoveries, cures, and therapeutics for the most serious diseases that cause morbidity, mortality, and disability.

“I was very intrigued by this innovative approach to recruit research teams rather than individuals,” Doctor said. “When I visited the School of Medicine, my enthusiasm increased after each meeting with clinical and basic science leadership, seeing the exceptional and unique partnership with the BioPark and the potential for collaboration with the outstanding programs at the University of Maryland, College Park.

“It was clear to me that through this unique and innovative opportunity, the resources, colleagues, and environment would be ideal to accelerate development of our bio-artificial red cell technology and, importantly, to both foster and ripen new innovation.

“The UMB Entrepreneur of the Year honor truly belongs to a large group that had most of the great ideas and did all the hard work,” Doctor added. “This includes the other KaloCyte co-founders — Dr. Dipanjan Pan and Dr. Philip Spinella — as well as KaloCyte president and CEO Elaine Haynes, the KaloCyte scientific team, board, and investors, and, of course, the entire team at the Center for Blood Oxygen Transport and Hemostasis.”