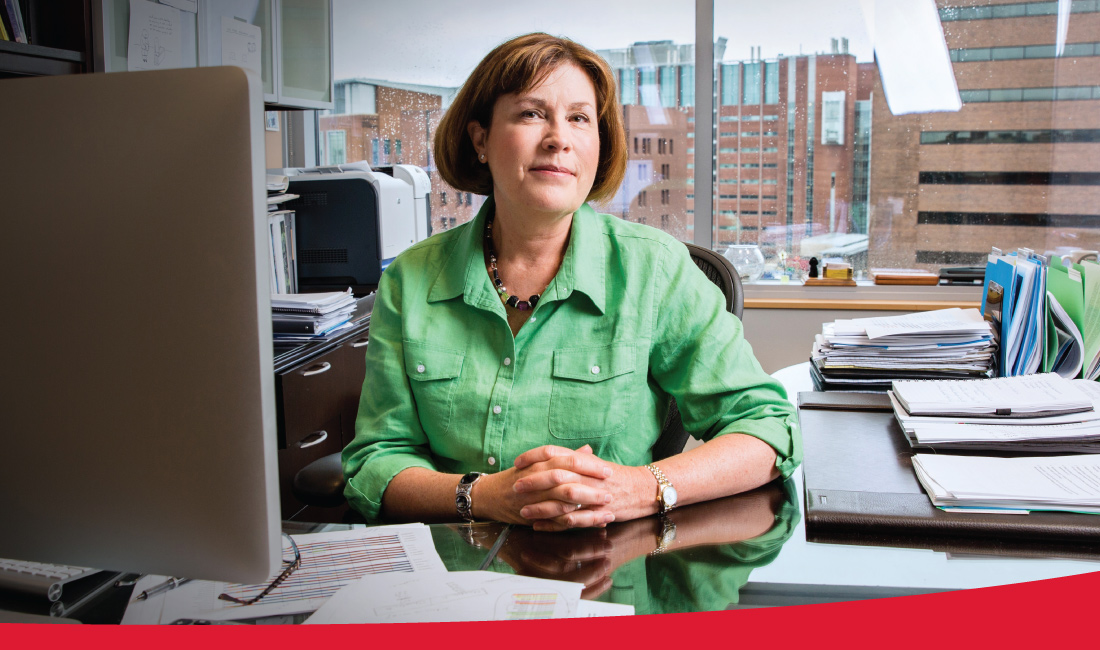 Given people’s preoccupation with keeping germs at bay, it’s perhaps surprising that most of the cells in our bodies are bacterial: 10 parts microbe to 1 part human is the most quoted ratio. Bacterial cells are smaller than human cells, comprising only 1‒3 percent of our body mass, enough to fill a big soup can. But we need that soup can to survive.

“These bacterial communities are with us from the day we’re born until the day we die, and they’re essential to human health,” says Claire Fraser, PhD, director of the Institute for Genome Sciences (IGS) at the University of Maryland School of Medicine. “They help us digest food, they synthesize a lot of the vitamins we need, they break down toxic compounds, protect against invading pathogens, and help maintain the human cells that line our gastrointestinal tract.”

Fraser knows as much about bacteria as anyone in the world. In 1995, she was on the team of scientists who first mapped the complete genetic code of a free-living organism, Haemophilus influenza, the bacterium causing lower respiratory tract infections and meningitis in infants and young children. That achievement forever changed microbiology and launched a new field of study: microbial genomics.

This was at The Institute for Genomic Research in Rockville, ground zero of the genomics revolution. As the institute’s president, Fraser would go on to lead the teams that sequenced the bacteria behind syphilis and Lyme disease, and eventually the first plant genome and the first human-pathogenic parasite.

The sequencing Fraser was doing yielded organism gene lists, akin to a parts list for a car. The challenge was to figure out how all the parts work together to create a living cell. What Fraser and her team didn’t expect was that “about one-third of the predicted proteins had never been seen before; we didn’t know what they did.” They also didn’t have a manual for putting the cell back together. Almost 20 years later, with thousands of genome projects completed, “we still see the same thing,” Fraser says. “There’s so much biology of all the organisms on Earth that’s yet to be discovered.”

The mapping approach Fraser pioneered has made her the most highly cited microbiologist of the last decade.

And yet Fraser’s path-breaking achievements were supposed to be in another field entirely. She stumbled into genomics on “a diversion” from her early career in pharmacology. Fraser started out researching G protein-coupled receptors, responsible for intra- and intercellular communication and a target of about half of the prescription drugs on the market today. Fraser wanted to use large-scale DNA sequencing to find new receptors and techniques. That’s when the opportunity arose to apply those techniques to the study of bacterial pathogens. By then, Fraser was hooked.

“It was the most fun I ever had doing research,” she recalls. “It was clear we were in the unique position to create a new field. The excitement and challenges that came with that were enormous.”

These challenges include unlocking the mysteries of several chronic diseases. “There’s a growing amount of evidence to suggest that diseases like obesity, diabetes, atherosclerosis, and inflammatory bowel disease (IBD) are associated with changes in the composition and function of the bacterial communities that live in our gut,” Fraser says. “What we don’t yet understand is whether the disease causes the change, or whether the change is triggered by something else that precipitates the disease.” If we understand how and why these bacterial communities change, Fraser says, then we can find ways to restore them to a healthier state.

Scientists might also discover connections among diseases. For instance, obesity, diabetes, atherosclerosis, and IBS all have a component of inflammation. And where inflammation is detected, researchers see similar changes occurring in the gut’s bacteria. Fraser says that’s especially exciting because “if we can correct the imbalance in the GI tract … then a specific approach may benefit individuals who suffer from a range of diseases that we don’t necessarily think of as having a common link.”

This work has made IGS a leading center in the National Institutes of Health’s massive Human Microbiome Project, begun in 2007 to study the role of microbes in human health and disease.

“I have no doubt that the work we’re doing now will find its way into clinical practice in the next 10 years,” Fraser says. She predicts that annual physicals will eventually include an analysis of each patient’s GI tract bacteria. “We know the [bacterial] communities change in association with age, diet, disease, exposure to antibiotics … so I think this will become another important measure of health. Changes could end up being predictive.”

IGS’s research, however, isn’t contained to microbes—or even to medicine itself. Its faculty are credited with game-changing genomic discoveries in agriculture, environmental science, and biodefense. The center is developing the field of microbial forensics; Fraser herself consulted on the FBI’s investigation into the 2001 anthrax attack, identifying four genetic mutations in the anthrax spores, which enabled the government to trace the material back to its original source.

“DNA is the common genetic code, and you find it in all organisms on earth,” says Fraser. “Our research program is really very broad, and the work we do intersects beautifully with all of the basic science departments here at the University of Maryland, Baltimore (UMB) and with a lot of the clinical departments.”

Initiating interdisciplinary projects is one of Fraser’s most important responsibilities as IGS director. “Because genomics is ‘big science,’ it tends to be highly collaborative,” she says. “There are so many things that go into successfully completing genome projects that no single investigator can do all of it by him- or herself.” Fraser cites projects with UMB’s schools of medicine, nursing, pharmacy, dentistry, and law, and says the main goal of each is to “figure out the most important questions that we can address collectively and answer them in a way that will have a positive impact on clinical practice.”

Equally important to Fraser is “keeping the bright, young investigators enthusiastic.” Years ago, as Fraser was building a career that would fundamentally change our understanding of microbial diversity and evolution, she had people encouraging her. “And I owe it to the people coming up behind me to do the same,” she says. “Even if I never got another grant funded, I could play that mentoring role, and I think I’d be fully satisfied.”