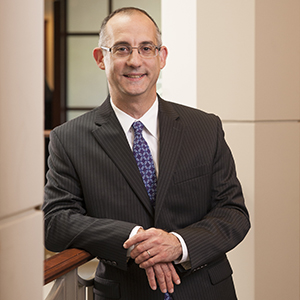 Donald B. Tobin, JD
Dean of the Francis King Carey School of Law

Donald B. Tobin was appointed dean and professor of the University of Maryland Francis King Carey School of Law on July 1, 2014, following a national search.

Tobin came to the University of Maryland, Baltimore from Ohio State University Moritz College of Law, where Tobin was the John C. Elam/Vorys Sater Professor of Law and also served as associate dean for academic affairs, associate dean for faculty, the Frank E. and Virginia H. Bazler Designated Professor in Business Law, founding co-director of the Program on Law and Leadership, and senior fellow at the Election Law @ Moritz program.

Prior to joining the academy, Tobin served as an appellate attorney in the Tax Division of the U.S. Justice Department and as a law clerk for Judge Francis Murnaghan Jr. of the 4th U.S. Circuit Court of Appeals. A native of Columbia, Md., Tobin began his career on Capitol Hill, working there before, during, and after law school. He served as a professional staff member for U.S. Senator Paul Sarbanes, the Senate Committee on the Budget, and the Joint Economic Committee of Congress.

Tobin’s research focus involves the intersection of tax and campaign finance laws, and he has published numerous articles on the use of the tax code to regulate campaign financing, including “Anonymous Speech and Section 527 of the Internal Revenue Code” (Georgia Law Review, 2003); “Political Campaigning by Churches and Charities: Hazardous for 501(c) (3)s; Dangerous for Democracy” (Georgetown Law Journal, 2007), a defense of the prohibition on charities and churches engaging in political advocacy; and “Political Advocacy and Taxable Entities, Are They the Next “Loophole?” (First Amendment Law Review, 2007), one of the first articles to identify a tax loophole that is now a major concern among campaign finance reform groups. Tobin has testified before the Federal Election Commission and the U.S. House Ways and Means Subcommittee on Oversight.

Tobin is also the co-author, with Samuel A. Donaldson, of Federal Income Taxation: A Contemporary Approach (West 2018), an interactive casebook that offers students opportunities for feedback on their understanding of the material.

At Carey Law, Tobin continues to be an active researcher and teacher. He assists in the Low Income Taxpayer Clinic, has taught in the MLAW program in College Park as part of the MPowering the State partnership with College Park, and is teaching a new course on Lawyers as Leaders.

He was honored twice while serving at the Department of Justice, receiving the Outstanding Attorney Award, Tax Division, in 1999, and the Volunteer Service Award in 2001. Tobin has received the Influential Marylanders Award (2017) and the Leadership in Law Award (2015) from The Daily Record.

Tobin is a member of the Maryland and Ohio bars and is authorized to practice in the U.S. Supreme Court, the U.S. Courts of Appeals for the 2nd, 4th, 5th, 9th, and 10th Circuits, and the U.S. District Court for Maryland.