Researchers at the University of Maryland School of Medicine (UMSOM) have received a nearly $7 million grant to be disbursed over five years from the National Institute on Drug Abuse (NIDA), which is part of the National Institutes of Health (NIH). The grant, provided to the Institute for Genome Sciences (IGS) at UMSOM, will be used to establish an online data coordination center to enable researchers to store and access data sets generated by a program called Single Cell Opioid Responses in the Context of HIV (SCORCH). 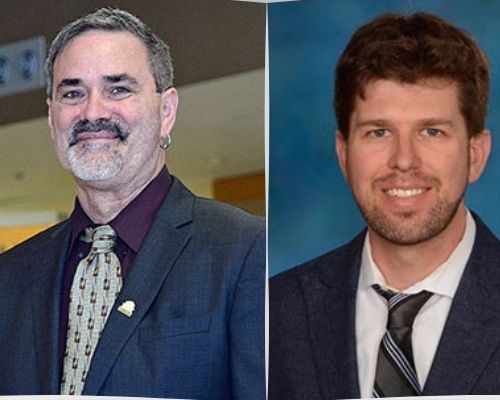 These data sets include genetic data (in the form of RNA and DNA sequencing) for several brain regions that are affected by persistent HIV infections and abuse of illicit drugs like opioids, cocaine, and methamphetamine.

“Our research is designed to determine which cells and overlapping areas of the brain are involved in both neurocognitive deficits associated with HIV infections and opioid use disorder,” said Principal Investigator Owen White, PhD, professor, epidemiology and public health at UMSOM and associate director, informatics, at the IGS at UMSOM.

Co-investigator Seth Ament, PhD, assistant professor of psychiatry and faculty member at IGS at UMSOM added, “Evaluation of the SCORCH data sets will help us map out the brain circuitry and molecular mechanisms that link these two seemingly disparate conditions to help us determine overlapping pathways that can be potentially targeted for treatments.”

Both researchers have played key roles in establishing the Neuroscience Multi-Omic Data Archive (NeMO), a database that contains genetic information relevant to the diversity of cell types in the brain and their abnormal functioning in brain diseases. SCORCH is a national consortium that leverages NeMO as well as other NIDA-funded databases that focus on HIV and substance abuse disorders.

HIV-infected patients suffer more frequently from chronic pain often due to neurological conditions caused by their infection. Doctors traditionally treated this pain with opioids, which led over time to more HIV-infected individuals developing opioid use disorder. Persistent HIV infections can also cause cognitive problems including anxiety, depression, confusion, and even full-blown dementia. A major impediment to developing better treatments for opiate abuse and addiction, as well as for neurological symptoms in HIV, is the lack of knowledge regarding the action of drugs and of virus on select cell subtypes in the complex central nervous system. The SCORCH program will close these gaps by using sophisticated data sets to better understand, on a molecular level, the interplay between opioid use disorder and HIV-related cognitive impairment.

The team will collect data through the SCORCH project consortium, which includes investigators at the UMSOM, the Broad Institute, and the Yale Cancer Center, and the J. Craig Venter Institute. The information incorporated into the NeMO-SCORCH data center will, in part, enable understanding of genomic regions associated with brain abnormalities and disease.

SCORCH researchers will study post-mortem human brain tissue of individuals with opioid disorder and HIV-associated cognitive impairment, using new technologies for “single-cell” genomics to quantify gene expression patterns in millions of single-cells. The roles of the SCORCH data center will be to organize data from the consortium, make it accessible to researchers around the world, and conduct integrative data analysis to provide insight into how each brain cell type changes in the context of opioid use disorder and HIV.

“Data-driven science holds the key to unlocking the cellular mechanisms that drive brain function,” said UMSOM Dean E. Albert Reece, MD, PhD, MBA, executive vice president for medical affairs, University of Maryland, Baltimore, and the John Z. and Akiko K. Bowers Distinguished Professor. “There is so much we still do not understand about opioid use disorder and how it relates to neurological conditions associated with HIV infection. This new research should provide important new insights.”