Kathleen Neuzil, MD, MPH, professor of medicine and pediatrics and director of the Center for Vaccine Development and Global Health (CVD) at the University of Maryland School of Medicine (UMSOM), and UMSOM Dean E. Albert Reece, MD, PhD, MBA, announced that CVD has been awarded a contract from the National Institute of Allergy and Infectious Diseases (NIAID), with total funding of up to $200 million over seven years if all contract options are exercised.

This research contract is one of the largest ever awarded to UMSOM and includes an initial award of approximately $2.5 million to conduct clinical testing of influenza vaccines. 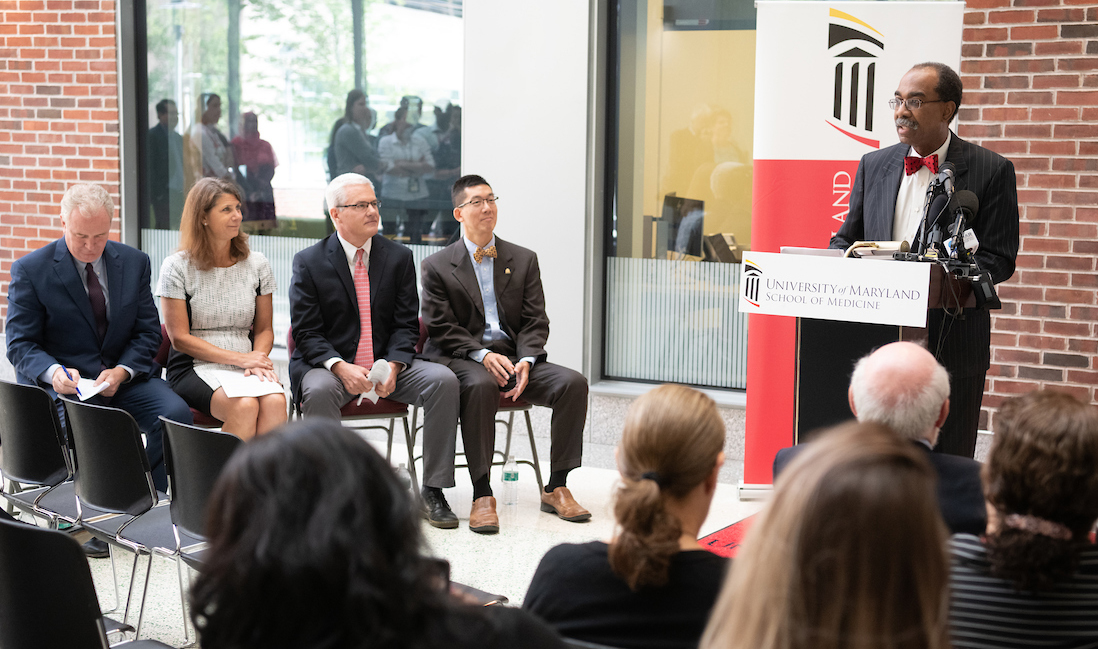 The seven-year contract will be led by Neuzil, who is one of the world’s leading and preeminent research scientists and advocates in the area of vaccine development and policy. For more than four decades, CVD has worked domestically and internationally to develop, test, and deploy vaccines to prevent and protect against a range of diseases, such as influenza, cholera, typhoid fever, malaria, shigellosis (bacillary dysentery), and other infectious diseases. CVD also has taken global leadership roles in vaccines to protect against emerging pathogens such as Zika and the Ebola virus.

The CIVICs program includes multidisciplinary research across a large network of institutions, supporting the development of vaccine candidates through testing in preclinical studies, clinical trials, and human challenge studies. This new CVD funding will establish a CVD CIVIC Clinical Core, with the specific goal of evaluating improved seasonal influenza vaccines and ultimately developing a universal vaccine to protect against emerging influenza strains.

Influenza, a contagious respiratory illness, is one of the greatest infectious disease threats to health and well-being. The disease impacted 43 million people in the U.S. alone during the 2018-2019 season, according to the Centers for Disease Control and Prevention (CDC). While current vaccines are our best tool to protect against influenza and its complications, the CVD CIVIC will address the urgent need for novel vaccines that provide broad and long-lasting protection.

As principal investigator, Neuzil will serve as the primary liaison with NIH program officers, CIVICs partners, and technical centers.

“Influenza virus is a common and serious infection that causes annual outbreaks in all age groups. While current influenza vaccines have been critical in reducing disease, the virus is constantly changing. The CIVICs program will address the need to develop and test influenza vaccines that protect against new and emerging strains, and ultimately prevent more disease,” Neuzil said.

Under Neuzil’s leadership, CVD has assembled an expert and accomplished team with extensive clinical research experience as well as virology, immunology, and influenza expertise. The research includes clinical trials and challenge studies in adults as well as in special populations, such as children, pregnant women, and the elderly.

Throughout her career, Neuzil has conducted clinical and epidemiologic studies on vaccine-preventable diseases, yielding high-profile publications that inform policy decision and public health actions. At the global nonprofit PATH enterprise, Neuzil was instrumental in the global introduction of vaccines against rotavirus, HPV, and Japanese encephalitis. At CVD, she leads a large international, consortium funded by the Bill and Melinda Gates Foundation to accelerate the introduction of a typhoid vaccines into low-resource settings worldwide. In addition, Neuzil has a robust influenza research program. She is dedicated to training and directs an NIAID T32 training grant in vaccinology, where she mentors and supports scientists around the global.

Neuzil’s research capabilities are complemented by nearly 20 years of involvement in domestic and international policy, including membership on the CDC Advisory Committee on Immunization Practices (ACIP). She currently serves as the only U.S. member of the World Health Organization’s (WHO) Strategic Advisory Group of Experts on Immunization (SAGE). In addition, Neuzil has contributed more than 200 scientific publications on vaccines and infectious diseases.

“This contract brings together a broad cross-section of researchers at UMSOM, who are experts in virology, vaccinology, and immunology. For decades, CVD has been a leader in researching and developing interventions for the most challenging diseases that impact the world’s most vulnerable populations. With this generous funding, and Dr. Neuzil’s expertise and leadership, CVD will be able to make pathbreaking discoveries, and test new vaccines against this persistent infection that affects millions of people around the world,” said UMSOM Dean Reece, who is also the executive vice president for medical affairs, University of Maryland, Baltimore, and the John Z. and Akiko K. Bowers Distinguished Professor.

The CIVICs program was jointly developed by NIAID’s Division of Allergy, Immunology and Transplantation and the Division of Microbiology and Infectious Diseases to advance development and clinical testing of improved seasonal and universal influenza vaccines that provide durable, broadly cross-protective immunity.

“This contract will unite the greatest scientific minds in our state and nation toward a mission to improve our national public health,” said U.S. Sen. Ben Cardin, JD ’67, (D-Md). “Both the University of Maryland School of Medicine’s Center for Vaccine Development and Global Health and the National Institute of Allergy and Infectious Disease have made incredible contributions to critical and lifesaving developments in disease prevention and treatment. Influenza is a common, yet complex illness that continues to put our most vulnerable citizens at risk. Through this public-private partnership, researchers will be able to clear the path for advancements in vaccination to better prepare our society for 21st-century health needs. I’m proud that it will take place right here in the great state of Maryland.”

U.S. Sen. Chris Van Hollen (D-Md), who is co-sponsor of legislation to increase funding for influenza vaccine research, said, “The flu has deadly costs — from its human toll to its negative impact on our economy. We must devote the necessary resources to develop a universal vaccine. That’s why I’ve introduced legislation in Congress to double our investment in this area — and why I’m so proud to announce this funding today. Every day the University of Maryland School of Medicine conducts life-saving research in addition to preparing our future doctors and medical professionals for success. This investment — and its potential — underscore the importance of their work.”
The CVD CIVIC program builds upon decades of clinical vaccine research at CVD, much of which is contracted through the NIAID-supported Vaccine and Treatment Evaluation Unit (VTEU) network. CVD, as a part of the VTEU network, is conducting vaccine trials against influenza and other diseases. In addition, CVD is studying vaccines to protect against malaria, anthrax, Dengue, Ebola virus, meningitis, and Hantaan virus. This project has been funded in whole or in part with federal funds from the NIAID, NIH, and Department of Health and Human Services, under Contract No. 75N93019C00055.