In a Sept. 6 letter to the University of Maryland, Baltimore (UMB) community, President Jay A. Perman, MD, addressed the dismantling of the Deferred Action for Childhood Arrivals (DACA) program, pledging that UMB's leaders will work closely with Maryland's congressional delegation to fight termination of DACA and ensure enactment of smart, compassionate, and ethical immigration policy.

In his letter about the program, which has allowed undocumented residents brought to the United States as children to remain in the country without fear of deportation, he suggested that DACA students or employees seek guidance from the university’s director of international services and that members of the community make their voices heard.

Here is the text of the letter:

To the UMB Community:

President Trump announced yesterday that he would begin to dismantle Deferred Action for Childhood Arrivals (DACA), a program allowing undocumented residents brought to the U.S. as children to remain in the country without fear of deportation. The president has ordered Congress to find a legislative solution addressing the immigration status of those now protected by DACA, the "dreamers" who came here as minors and have since become our cherished neighbors, friends, classmates, and colleagues. 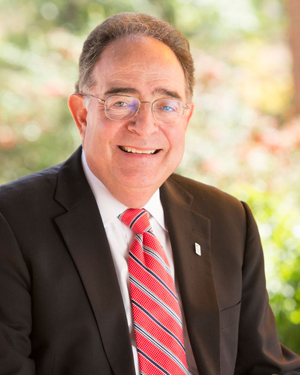 Jay A. Perman, MD, president of the University of Maryland, Baltimore

Since DACA's launch in 2012, the program has allowed hundreds of thousands of young people to participate fully in American life, to enrich our culture, enlarge our economy, and make this country as great as it's ever been. The beneficiaries of DACA are not only the dreamers themselves but every one of us, because welcoming these young people into our schools, universities, and communities animates our values and strengthens our prosperity.

If you are a DACA student or employee, I urge you to contact Amy Ramirez, director of international services, for guidance. She can be reached at 410-706-7488.

When I wrote to you last month about the violence in Charlottesville, I said our outrage is not the answer; our action is. And so I pledge that UMB's leaders will work closely with Maryland's congressional delegation to fight the termination of DACA and to ensure that the U.S. develops and enacts smart, compassionate, and ethical immigration policy -- policy that respects the humanity of these dreamers and the enormous contributions they make every day to this state and this nation.

I ask you to make your voices heard as well. I ask you to write to Sen. Ben Cardin and Sen. Chris Van Hollen, and to your U.S. representative.

NAFSA, an association of international educators, has provided a letter template (below) endorsing what UMB considers the best opportunity for a legislative path forward. Feel free to use this template as a guide as you draft your own letter to your elected officials.

As UMB's schools organize symposia and activities on U.S. immigration policy and advocacy, we will share these opportunities with students, faculty, and staff.

Here is the text of the letter template that was distributed to the UMB community:

As a constituent, I am writing to ask you to co-sponsor and champion the passage of the bipartisan Dream Act of 2017 (S. 1615/H.R. 3440) and not use DREAMers as a bargaining chip for anti-immigrant policies. Until the Dream Act is signed into law, I urge you to support Deferred Action for Childhood Arrivals (DACA) to protect these blameless young people, and to work with Congress on balanced and thoughtful approaches to immigration reform.

The Dream Act will provide conditional legal status with a path to citizenship for those who were brought to the United States without legal immigration status as children and who graduate from U.S. high schools and attend college, enter the workforce, or enlist in a military program.

The stringent requirements of Dream Act conditional status include proof of good moral character, U.S. residency, and background checks, among others. If approved, Dreamers must wait eight years to apply for a green card and demonstrate the ability to read, write, and speak English; demonstrate knowledge and understanding of the fundamentals of the history, principles, and form of government of the United States; prove good moral character; again pass a background check; and meet other requirements.

We want all children to grow up with the opportunity to develop their talents and gifts not only for their benefit, but because greater opportunity creates better families, communities, and citizens. In our country, we do not want people to live in fear.

The Dream Act has long enjoyed bipartisan support, and an overwhelming majority of Americans agree that passing the bill is the right thing to do. Please co-sponsor the Dream Act.