Political leaders and leaders in higher education came together Sept. 13 to make a strong pitch to the Federal Bureau of Investigation (FBI) to build its new headquarters in Maryland. At a news conference in Greenbelt, one of two potential Maryland sites, University of Maryland, Baltimore (UMB) President Jay A. Perman, MD, and University of Maryland, College Park (UMCP) President Wallace D. Loh, PhD, JD, announced their plan to form a joint national security academy that would support the FBI with expertise and training.

The Maryland Academy for Innovation and National Security would leverage and expand on existing programs at both universities in cybersecurity, counterterrorism, forensic biomedicine, law, and criminology. The academy, to be located at UMCP, would foster research, educate FBI agents, and expand undergraduate and graduate course offerings. The project also would be the latest undertaking of the UMB-UMCP strategic partnership, University of Maryland: MPowering the State. Four years old, the collaboration boasts significant accomplishments in innovation, educational advancement, and economic activity by leveraging the strengths of each university to tackle challenges together. During the last legislative session, the Maryland General Assembly passed legislation that formalized the partnership and encouraged increased activity.

"The FBI is in the process of transforming itself into a law enforcement agency that's based upon intelligence and leadership," Loh said. "For that the FBI needs to be in close proximity to the two major research universities in the region, College Park and Baltimore." Loh also reminded those in attendance of the successful collaboration between the two universities and the FBI shortly after the September 2001 terrorist attacks. UMB's pioneering forensic DNA experts were able to sequence the precise strain of anthrax bacteria used to attack congressional offices and the main postal sorting facility in Washington, D.C. Computational scientists at UMCP were then able to produce a "bacterial fingerprint" used to crack the case.

UMB's Perman quickly followed up with a long list of academic and scientific resources UMB can and already does employ to benefit national security, providing expertise in areas such as cybersecurity, counterterrorism, and infectious disease prevention. "Our world-renowned University of Maryland Center for Health and Homeland Security, led by Professor [Michael] Greenberger, is a leader in all aspects of national security and emergency response preparedness," Perman said. "We're already a key resource for the national security and crisis management communities. We train top-level enforcement and intelligence officers. We build capabilities in advanced data analytics and the nation relies on our leadership in containing and curing diseases, particularly infectious diseases of global impact. So imagine what we can do when we join our efforts with our colleagues at College Park."

In addition to the talent and expertise offered by the two universities, University System of Maryland Chancellor Robert L. Caret, PhD, argued that Maryland, at either of the two finalist locations, would be much more advantageous for the FBI than Fairfax, Va., the only finalist site outside of Maryland. "We have the talent. We have the expertise, and the quality of life is obvious," he said. "Maryland is No. 3 in baccalaureate educated individuals on a per capita basis, No. 2 in terms of advanced degrees on a per capita basis, No. 2 in the nation on a percentage basis of citizens who are employed in STEM occupations, and, most importantly for what we do, No. 1 in education." 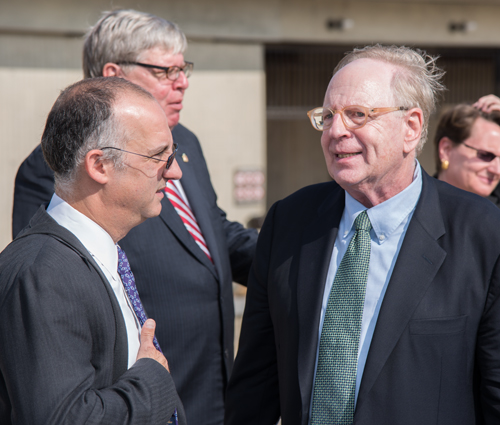 Core support for the academy would derive from two academic centers, the National Consortium for the Study of Terrorism and Responses to Terrorism (START) at UMCP, and the University of Maryland Center for Health and Homeland Security (CHHS) at UMB. Standing alongside CHHS Director Michael Greenberger, JD, START Executive Director William Braniff, MS, was cheered on by some of his students as he set the bar high for the new academy. "Through START and CHHS the Maryland Academy will be the national leader in terrorism and counterterrorism studies, the FBI's No. 1 priority, generating the best data in the world on terrorism, leveraging our flagship internship program that graduates 100 of the next generation of counterterrorism professionals every semester through in person online and simulation-based professional training and through our undergraduate minor, our practitioner-focused graduate certificate, and a forthcoming practitioner-focused PhD program."

Echoing Braniff's enthusiasm, Donald B. Tobin, JD, dean of the University of Maryland Francis King Carey School of Law, expounded on CHHS' contribution to the academy, as well as the benefits of targeted legal degree and certificate programs. "For more than a decade Professor Greenberger and his staff have worked with private sector executives and government officials here and abroad to develop plans and policies and strategies that ensure the safety of citizens during natural and man-made catastrophes," Tobin said. "CHHS is also an important partner with the law school in our masters degree program that we launched last year here in College Park. Today more than 80 working professionals are candidates for Master of Science in Laws [MSL], as we call it. All of our MSL students must specialize in one of five areas. Cybersecurity and crisis management are two of our most popular tracks."

Maryland political leaders have wooed the FBI with the promise of tens of millions of dollars in infrastructure and road improvements during the more than two-year headquarters site selection process. A final decision is expected in the next few weeks. "This makes all the sense in the world," said Delegate Michael E. Busch, speaker of the House of Delegates, "not only in Maryland but hopefully on the national level when they award the FBI headquarters to Greenbelt, Md."