Residents of Baltimore City shared their thoughts about and experiences with the Baltimore Police Department at a Community Town Hall co-sponsored by the University of Maryland Francis King Carey School of Law on Sept. 7. About 300 residents, activists, students, elected officials, and more attended the town hall co-sponsored by Maryland Carey Law’s Black Law Students Association, its Student Bar Association, and the Journal of Race, Religion, Gender and Class, as well as the NAACP Legal Defense Fund and U.S. Rep. Elijah Cummings. Michael Pinard, JD, professor and co-director of the Clinical Law Program at Maryland Carey Law, was instrumental in organizing the event.

The U.S. Department of Justice recently released the findings of its investigation into policing practices of the Baltimore Police Department. As a result, the city of Baltimore and the Department of Justice (DOJ) are negotiating a consent decree that will outline strategies to address the civil rights violations identified in the report. The community input, including the town hall at Westminster Hall, is part of the consent decree process.

The event, open to the public, gave community members the opportunity to share with each other and with officials, including DOJ representatives, their own experiences with and thoughts on policing practices within the Baltimore Police Department. 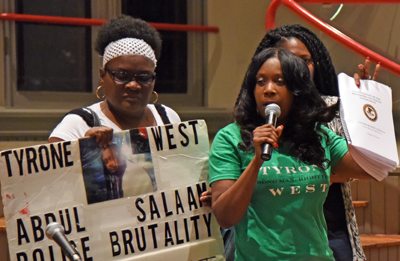 Tawanda Jones (right) tells the story of her brother, Tyrone West, who died in 2013 after being arrested during a traffic stop.

“Like many of you, I have read the DOJ report,” Maryland Carey Law Dean Donald B. Tobin, JD, told the standing-room-only crowd as he opened the forum. “It describes a situation in our city that is both horrific and unacceptable. But today is not a day for me to talk. Today is a day for me and for all of us to listen. It is a chance for you to tell your story, for you to have a chance to express your frustration, your ideas, your hopes, your dreams, and your suggestions for a better Baltimore.”

Cummings urged the crowd to participate in the Justice Department’s process. “On the way in here, one of the reporters said, 'How do you know that this is going to work?'” he said. “I don’t know that this is going to work. But I know one thing. We don’t have a choice. We have to go in this direction and make the best of this situation. There was much protest after Freddie Gray’s tragic death, and it is my hope we will take that protest and change the policy, systems, culture, and practices of our police department. I’m begging you to work with this process - this is the only one we got. We must take this critical moment … and turn it into a movement.”

Sonja Sohn, an actress and activist known for her work on The Wire, also addressed the audience. Sohn has founded a nonprofit called ReWired for Change, devoted to empowering at-risk youth, families, and communities.

“I have been on the streets of Baltimore. I know the pain and the despair and the lack of trust felt by the people of this city,” said Sohn.  “We would do ourselves a great disservice if we do not recognize that all of these [police misconduct] issues are deeply rooted in a culture and mindset of unconscious implicit racism which must be extricated from the minds of the individuals who have sworn to protect and serve the people of Baltimore.”

Speaking for the Justice Department, Timothy Mygatt, deputy chief of the Special Litigations Section of the Civil Rights Division, summarized the report. His statistics included that out of 300,000 reported stops by the Baltimore Police Department between 2010 and 2015, just 3.7 percent “resulted in a kind of citation or arrest,” Mygatt said. “That makes us very concerned that those stops were not on the basis of reasonable suspicion as is required by the Constitution, but instead were based on other grounds, on illegal grounds.”

When the program opened up to comments from the audience, community members lined up to deliver their testimony at microphones at the front of the hall. A stenographer transcribed all the comments so that the DOJ can use the information in negotiating the consent decree with the city of Baltimore. The comments ranged from personal stories to suggestions for how to reform policing in the city.

“The DOJ report told us something that most Baltimoreans already knew, which is that the police’s interaction with Baltimore and her citizens is incredibly broken,” said Dena Robinson, a third-year student at Maryland Carey Law and a former Baltimore City schoolteacher. “The consent decree should contain a provision requiring police officers in the districts in which they police and serve to have weekly conversations that are facilitated by Baltimore community mediators. We need this in our city to rebuild the trust that has been broken for years now.”

One young man identified himself as “Shadow,” and said he was a peer advocate from the Penn-North neighborhood whose own father was a police officer. “First, the police in general are not granted special rights by any means … in any part of the Constitution or in any legal books, therefore when they commit murder or any other crime they should be charged and treated as such,” he said.

Shadow suggested that police should be limited to just a year of service. “Until someone recognizes the type of post-traumatic stress that comes with a job that pits you against a certain kind of people over a long period of time, and the hatred and the biases that it creates, it will remain a problem,” he said.

As the crowd lined up to speak inside, outside on the sidewalk the family of Tyrone West gathered with supporters and set up a loudspeaker. West, 44, died in July 2013 after being arrested at a traffic stop. The West family protests in Tyrone West’s memory each Wednesday, arguing for police reform. The family and their supporters talked on the sidewalk for a bit, holding protest signs, before entering Westminster Hall to give their own testimony.