A yearlong, Universitywide conversation on the topic of cultural competency began Sept. 9 as the University of Maryland, Baltimore (UMB) launched the 2015-16 President’s Symposium and White Paper Project. Olivia D. Carter-Pokras, PhD, professor in the Department of Epidemiology and Biostatistics at the University of Maryland, College Park School of Public Health (UMCP-SPH), delivered the opening lecture in the speakers series.

UMB President Jay A. Perman, MD, started the initiative in 2011 to engage an interprofessional group of fellows who are selected to delve into a topic selected for its pertinence to UMB. Last year, for example, the subject was community engagement.

This year’s topic, cultural competency, can be defined as the ability of health organizations and practitioners to recognize an individual’s cultural beliefs, values, attitudes, traditions, language preferences, and health practices and to apply this knowledge to influence positive health outcomes.

Carter-Pokras delivered a lecture, “The Role of Cultural Competency and Health Literacy in Health Professional Education/Training,” followed by a question-and-answer session for a large group of students, staff, and faculty gathered at the Southern Management Corporation Campus Center at UMB. View a photo gallery. 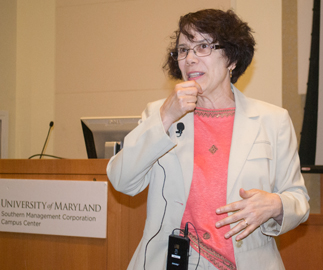 Olivia D. Carter-Pokras, PhD, professor in the Department of Epidemiology and Biostatistics at the University of Maryland College Park School of Public Health

She urged those in attendance to set aside time to explore their own biases using an online measurement tool called an implicit association test.

“Implicit bias exists among clinicians and the public,” said Carter-Pokras. She suggested that health care and service providers who view themselves as somehow apart from these mindsets need to reconsider. “Providers are members of the community,” she said.

Biases go beyond language, race, and culture to include leanings such as “ableism,” a prejudice against people with disabilities, she said. Evaluation can reveal various biases but she cautioned that people seeking such knowledge should build in time for adequate reflection.

“We can do something about it,” she said, adding that techniques such as simulation, emphasizing growth rather than a fixed mindset, and goal-setting contribute to success in opening minds. “Perhaps we should be doing more interprofessionally.”

Avoid making assumptions based on factors such as shared language, she said, using the example of Spanish-speaking people whose cultures differ based on country of origin. While at UMCP-SPH, Carter-Pokras has focused on supporting translation of epidemiologic research into policy and practice to improve Latino population health.

She is the co-author of the Cultural Competency and Health Literacy Primer: A Guide for Teaching Health Professionals and Students, which she developed in partnership with the Maryland Department of Health and Mental Hygiene's Office of Minority Health and Health Disparities in 2013.

Carter-Pokras taught at UMB as a faculty member in the School of Medicine (SOM), where she continues to hold a secondary appointment in Epidemiology & Public Health. She urged the President’s Fellows to embrace their exploration of cultural competency, saying she would look forward to their recommendations.

The President’s Symposium and White Paper Project is supported by the UMB Office of Interprofessional Student Learning & Service Initiatives. The next lecture in the speakers’ series will be held Oct. 12, and registration for that event has begun.