University of Maryland School of Medicine (UMSOM) Dean E. Albert Reece, MD, PhD, MBA, announced today that UMSOM has been awarded $1.25 million in matching funds from the Maryland E-Nnovation Initiative Fund (MEIF), administered by the Maryland Department of Commerce. The funds, totaling $2.5 million when combined with private philanthropy, will enable the establishment of a new Center for Pathogen Research. They will also enable UMSOM to support research professorships in the Department of Microbiology and Immunology and the Department of Neurology.

The Alicia and Yaya Foundation made a $750,000 philanthropic commitment to establish the Alicia and Yaya Foundation Professorship in Pathogen Research in the Department of Microbiology and Immunology. Matching state funds bring the total to $1.5 million, which will establish an endowed professorship for Matthew Frieman, PhD, associate professor of Microbiology and Immunology at UMSOM. He will also serve as the director of a new Center for Pathogen Research. 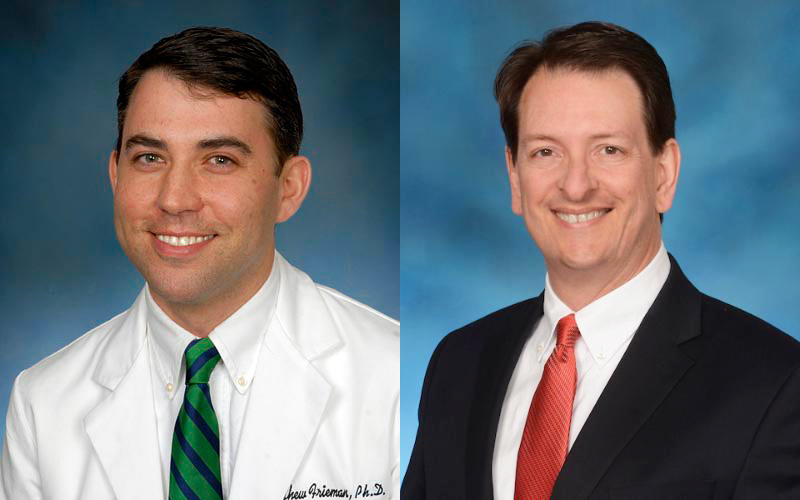 Frieman is one of the nation’s leading researchers on coronaviruses, publishing dozens of research studies over nearly two decades on the inner workings of these viruses and how certain novel strains led to outbreaks of SARS and MERS. For the past 20 months, his research has focused exclusively on developing vaccines and novel treatments, like monoclonal antibodies, for COVID-19, which is caused by the SARS-CoV-2 coronavirus.

“I am truly honored to receive this endowed professorship and will continue to accelerate our department’s ongoing research portfolio through basic and translational research discoveries in the field of novel coronaviruses and other emerging pathogens of concern,” said Frieman. “I am proud that the groundwork we laid during the early months of the COVID-19 pandemic has translated into lifesaving vaccines and treatments.”

UMSOM also received a total of $1 million — with $500,000 from philanthropic donors William E. and Sally H. Brown and $500,000 in state funds — to establish the William E. and Sally H. Brown Professorship in Parkinson's and Movement Disorders. The funding allows the school to recruit an internationally recognized physician-scientist specializing in neurodegenerative disorders such as Parkinson’s or Alzheimer’s disease.

Research enabled by the MEIF initiative will focus on new applications toward clinical use and potential commercialization to bring new intellectual capital to the state of Maryland. The E-Nnovation program, which was created as an economic stimulus in 2014, is a special nonlapsing fund designed to help the state’s research universities recruit and retain top scientists and investigators. Under the fund, approximately $8.5 million will be appropriated by the governor each year from fiscal years 2016 through 2021.

“Continued funding from this initiative has been vital for us to provide our outstanding faculty members with the critical resources they need to sustain and expand the promising research they endeavor to carry out,” said Reece, who is also executive vice president for medical affairs at the University of Maryland, Baltimore (UMB) and the John Z. and Akiko K. Bowers Distinguished Professor. “The funding also enables our faculty to launch new initiatives, like the Center for Pathogen Research, to educate and train future physician-scientists, and to continue making groundbreaking discoveries to potentially impact disease burdens and human health.”

In addition to UMSOM, the Maryland Department of Commerce joined seven other local colleges and universities in endowing a total of $21.2 million to fund a dozen new research professorships. The endowments were made through the Maryland E-Nnovation Initiative (MEI), a state program created to spur basic and applied research in scientific and technical fields at the colleges and universities. The schools raised a total of more than $10.6 million in private funding for each chair and Maryland Commerce approved matching grants of $10.6 million to support the endowments.