The University of Maryland, Baltimore (UMB) held a white coat ceremony on Oct. 5 for the latest group of sixth-graders to be selected as UMB CURE Scholars. The West Baltimore public school students, known as Cohort 5, were welcomed by slightly older peers who took part in the milestone event.

Baltimore City Health Commissioner Letitia Dzirasa, MD, urged both the youngest and oldest of the scholars, composed of sixth- through 10th-graders, to seize their opportunities. “Gain all you can from your experiences in this program — mentoring, academic support, life skills coaching,” Dzirasa said. “Take all the skills gained with you as you continue along your academic career, but recognize that your opportunity to be here is still the exception and not the norm.”

Observing that all of the CURE Scholars have been gifted with the opportunity to learn about STEM (science, technology, engineering, and math) through the program, Dzirasa continued, “Now it's your job to pave the way for our successors.” 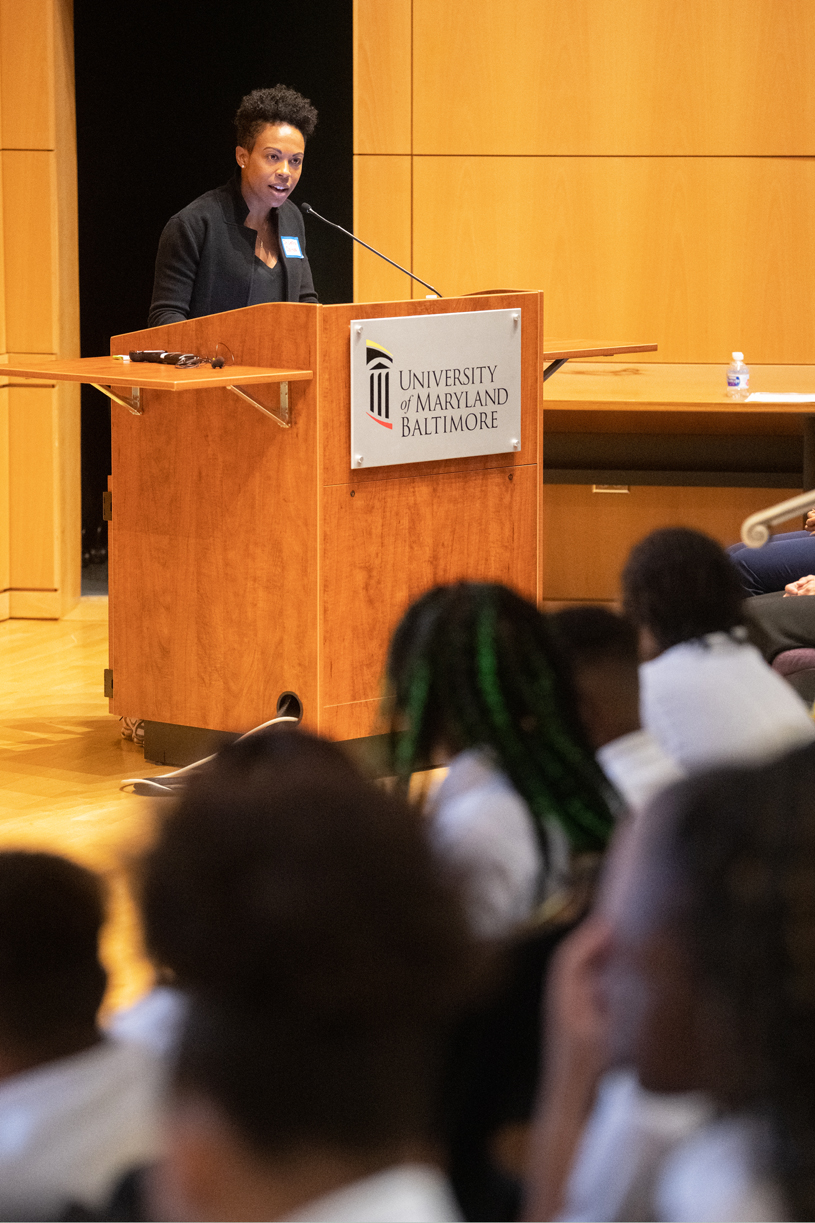 In a keynote address to the UMB CURE Scholars, Baltimore City Health Commissioner Letitia Dzirasa, MD, said, "Now it's your job to pave the way for our successors.”

The nationally recognized mentorship program is a pipeline that aims to guide West Baltimore students to promising futures in science and health care. Established in 2015, it has become a model as the first to start as early as sixth grade. UMB CURE is part of the National Cancer Institute’s CURE (Continuing Umbrella of Research Experiences) initiative and is supported by NCI’s Center to Reduce Cancer Health Disparities (CRCHD).

Dzirasa, who became health commissioner in March 2019, is a physician and a former health innovation officer at a Baltimore technology firm. She told the scholars and a large audience of mentors, family members, and well-wishers that her career path had come as a surprise.

“I want to be clear, not seeing myself here isn’t because I didn’t have aspirations to work in public health but rather it didn’t seem possible that I, a young African-American female who hates public speaking, could ever hold the role of top physician in a major metropolitan city,” she said.

Dzirasa credited her participation in the Meyerhoff Scholars Program at the University of Maryland, Baltimore County (UMBC) with instilling the concept “that we succeed and fail as a team.”

Her mention of UMBC drew cheers from among the rows of UMB CURE mentors, which included a contingent from UMBC.

All of the UMB CURE mentors were awaiting their big moment of the day, which occurs each year after the white coat ceremony. They are matched to the sixth-graders in a “mentor mixer” during which the incoming students ask questions about the backgrounds and interests of those who will become their role models. During the same period, the older cohorts show off their public health campaigns or their research posters on cancer disparities and STEM projects.

At the main event, held at the University of Maryland School of Nursing Auditorium, the health commissioner got a warm welcome from UMB President Jay A. Perman, MD, who took note of the fact that he and Dzirasa are pediatricians.

“You are my kids,” Perman said fondly to members of all five cohorts. And he went on to pay tribute to their first mentors, the students’ parents and grandparents, who stood to enthusiastic applause. Several members of Cohort 5 are legacy scholars, joining siblings or other family members in the program.

And Perman generated a wave of congratulatory applause when he introduced UMB CURE Scholars executive director Gia Grier McGinnis, MS, sharing the news that she had recently succeeded in defending her dissertation for a DrPH degree from Morgan State University.

Alison Lin, PhD, program director of the Diversity Training Branch at CRCHD, turned her own remarks into something of a tradition with the CURE Scholars, giving them a test as she has done at previous events. When she saw too few hands in response to her question about an anecdote involving a mango tree, she admonished all of the cohorts to discover the difference between “hearing and listening.”

Afterward, SBCS sixth-grader Gabrielle Canady had taken it all in and said she felt excited, happy, proud, and hyped. “I’m ready to learn something,” she said.

“I think it’s a great opportunity for her, and I believe it’s an experience for her to be on her own and grow up,” said her mother, Antoinette Canady. “That’s what I want for her, to be independent.”

The Canady family and others connected with Cohort 5 were offered campus tours that included stops such as URecFit in the Southern Management Corporation Campus Center and the UMB Community Engagement Center, which is currently at the UM BioPark and next year will occupy a new location in the nearby Hollins Market area.