The day was brisk, the winds were moderate, and the invited crowd and numerous passers-by were appreciative as the first piece of public art on the campus of the University of Maryland, Baltimore (UMB) was dedicated on Oct. 16.

(View a photo gallery on Facebook and see a video below.)

The 30-foot-tall piece by artist Eric Peltzer is a kinetic sculpture that had been temporarily immobilized by a red sash. He and the participating dignitaries, including Maryland First Lady Yumi Hogan, had no scissors to cut that ribbon as is typical during a dedication. Instead they loosened the sash and let the wind take hold. 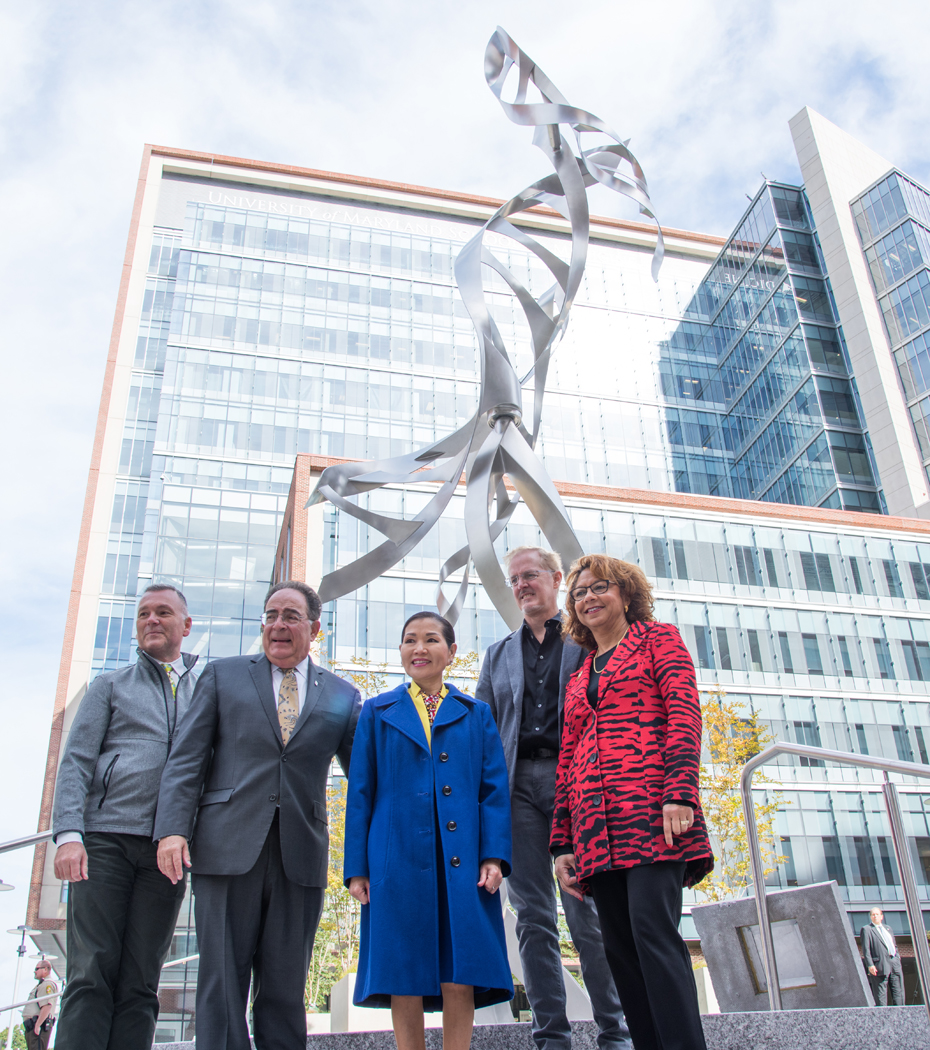 In introducing the artist, UMB President Jay A. Perman, MD, had set the stage for the resulting movement. He observed that Peltzer had chosen a fitting title, “Stochastic Interactions,” and that stochastic describes the random processes of genetics and molecular biology.

“The random nature of the wind interacting with the sculpture is meant to suggest the randomness at work on our genetics. It’s a gorgeous piece,” Perman said.

Perman also called attention to the way the piece “suggests the human form through the shape of the DNA double helix.” He called the design “a wonderful nod” to the cutting-edge genomic research that takes place in Health Sciences Research Facility III. The new building is a soaring backdrop for the sculpture and home to the Institute for Genome Sciences of the University of Maryland School of Medicine (UMSOM), among other offices and labs.

As required by legislation passed in 2013, Maryland must include public art in new or renovated state buildings. The Maryland Public Art Initiative (MPAI) sets aside a percentage of capital construction costs for the integration of public art and enables its creators to become involved early in the planning and construction phases.

Peltzer is a Southern California artist who has been making sculptures for more than three decades. He visited the site over a two-year period after being selected in an open-call jury process overseen by the Maryland State Arts Council, an agency of the state Department of Commerce.

It is the Maryland Commission on Public Art that directs the strategic vision of Maryland's statewide public art program. Leaders of both participated in the ceremony.

“Public art is free. No admission price. A museum without walls,” said the council’s executive director, Ken Skrzesz, who also noted that an outdoor sculpture such as Peltzer’s work “allows us moments of reflection.” As for the dynamics of the still-fettered “Stochastic Interactions,” Skrzesz observed, “It’s dying to take off!”

Commission Chair Catherine Leggett called the sculpture magnificent, adding that the piece  “lifts us up” and connects the health-care aspects of its surroundings on the UMB campus and the nearby University of Maryland Medical Center. “Well done,” she said.

The sculpture stands at the corner of Pine and Baltimore streets. The latter is a busy bus-route corridor. Meanwhile, city and campus pedestrians include patients arriving and departing the clinics of the University of Maryland School of Dentistry at 650 W. Baltimore St. Only moments after the unveiling, a dental patient emerged and admired the work.

It is that sort of public access that Maryland First Lady Hogan finds laudatory. Speaking from her perspective as an artist and in her role as honorary chair of the UMB Council for the Arts & Culture, she described the sculpture as beautiful, like a bird, and observed that it’s in the perfect spot to inspire “people of all ages, including students.”

Hogan, a faculty member at Maryland Institute College of Art, called “Stochastic Interactions” an example of “artists connecting our lives.”

Peltzer said he drew his inspiration for “Stochastic Interactions” on the history of the university and especially on that of its medical school, relying greatly on author Larry Pitrof, executive director of the UMSOM Alumni Association. The legs have twists, symbolic of the challenges of the first 100 years. Also, the legs have little incisions that reflect “an inquisitive nature,” Peltzer said.

As for the genomics aspect, he said, “People walk by and know what’s going on in the building.”

Peltzer also shared one of his biggest difficulties, literally: “To get something this big and heavy to move in the wind.”

Dignitaries in attendance included Maryland Higher Education Secretary James Fielder Jr., PhD, and Liz Fitzsimmons, managing director of the Division of Tourism, Film and the Arts at the Maryland Commerce Department, which oversees the arts council.

Peltzer’s parents, sisters, and other family members were present. So were several members of the selection committee, whose members spent months poring over nearly 200 artist applications. The committee was led by UMB Assistant Vice President Angela Fowler-Young, director of the Office of Real Estate, Planning, and Space Management. It included Anthony Consoli, AIA, LEED AP, campus architect at UMB; Robert Cook, executive director of facilities and operations at UMSOM, and Pitrof, among others.

Perman thanked the committee and everyone at UMB and in Maryland government who saw the project through, such as Mark Behrens, a senior design and construction project manager at UMB, and the Maryland State Arts Council’s Liesel Fenner, ASLA, program director of public art.

“There are a million moving parts to something like this,” the president said.

But the only moving parts that mattered were the arms of the sculpture. And Peltzer’s “Stochastic Interactions” responded to the wind, on cue, at its dedication.