Jamiyah Mitchell may only be in sixth grade, but she already has her sights set on going to medical school and becoming a pediatrician. The Southwest Baltimore Charter School (SBCS) student is one step closer to her goal after she was officially inducted into the CURE Scholars Program at the University of Maryland, Baltimore (UMB).

On Saturday, Oct. 6, Jamiyah and 23 other sixth-grade students from SBCS, Franklin Square Elementary/Middle School (FSEMS), and Green Street Academy (GSA) were presented with the CURE program's signature white laboratory coat, symbolizing their acceptance into the prestigious academic program, in a ceremony at the University of Maryland School of Nursing Auditorium. 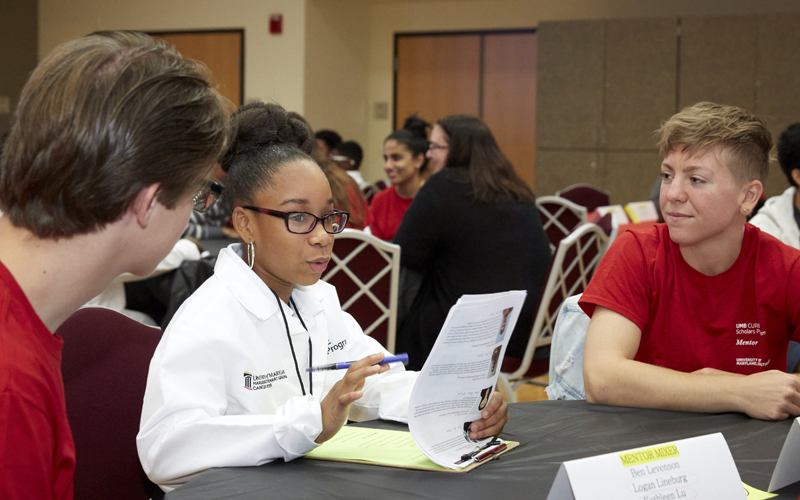 “I decided to join CURE because I wanted to do something outside of school where I was still learning, so I could get into good schools,” Jamiyah explained. “I just know I’m ready for a big experience like this one.”

Established in 2015, the UMB CURE Scholars Program is a unique pipeline initiative aimed at guiding West Baltimore children into challenging careers in medicine and public health. It is the first program in the nation to begin academic enrichment and mentorship for students as early as sixth grade.

“I am very excited for Jamiyah to be in the CURE program,” said Jamiyah’s mother, Shardae Randolph, “It offers a lot of help and a lot of support. I hope they help her to stay focused, stay on top of her grades to get her where she wants to go.”

Jamiyah is part of the fourth cohort of scholars to be welcomed into the CURE program with its traditional White Coat Ceremony. It was fitting to have the scholars from cohort 1 — who have just begun their first year of high school — present the newest scholars with their lab coats.

“I remember cohort 1 when they were babies, and now they’re all taller than me!” Robin Saunders, EdD, MS, executive director of the UMB CURE Scholars Program, said to the crowd attending the ceremony. “I am so incredibly proud of them and happy for them to be here to welcome our brand-new scholars.”

After receiving their white coats, the new scholars headed to the SMC Campus Center to attend a “mentor mixer.” The scholars got the chance to meet some of the 261 mentors who are committed to guiding these youngsters on their journey to success. All donning red shirts, the mentors are made up of volunteers from UMB’s six professional schools and interdisciplinary Graduate School, UMB faculty and staff members, and participants from other universities and organizations. The mentors are paired with the scholars on a 5:1 ratio, which creates a strong foundation of support for each scholar starting from Day 1.

The scholars in cohort 4 also will get an added layer of mentorship from the three older cohorts. Kaden Johnson, a GSA student in cohort 3, has one year of CURE under his belt. He received his white coat last year and is on the path to becoming a dentist. When asked what advice he would give to the newest class of scholars, he replied, “Stay focused. Don’t be shy. Have faith and hope in yourself, and you’ll be where you want to be.”

The success of the program has become a catalyst for a new academic enrichment initiative that will be launched by the National Cancer Institute (NCI), which is a supporting partner of UMB’s CURE Scholars Program. NCI’s new initiative is called YES, which stands for Youth Enjoy Science. Modeled after UMB’s CURE Scholars Program, YES will provide support for eligible institutions to develop and maintain early intervention strategies to academically engage under-represented students and help prepare them for careers in biomedical research. Like the CURE Scholars, middle school students across the nation will get the opportunity to participate in hands-on learning experiences under the guidance of mentors.

UMB President Jay A. Perman, MD, described the creation of YES during the CURE White Coat Ceremony in a welcome video. He congratulated the scholars on playing a vital role in the startup of the new, nationwide program.

“You made this possible,” he told the scholars. “Your interest, your excitement, and your success have already made a difference to countless more students who now have access to the same opportunities that you have.”

Perman went on to address the new cohort of scholars, explaining to them the importance of programs like CURE and YES that aim to diversify the medical, science, and public health workforces that will in turn reduce racial disparities in cancer research and treatment. He also impressed upon the scholars that they have a village of support whenever they need help. They can always turn to their mentors, teachers, and even fellow CURE Scholars for guidance.

This is exactly what Lynijiah Walker, a FSEMS student in cohort 4, needed to hear. “I’m excited, but scared at the same time,” she said. “I don’t know what will be coming next or what journey this program is going to take me on, but I am very excited.”