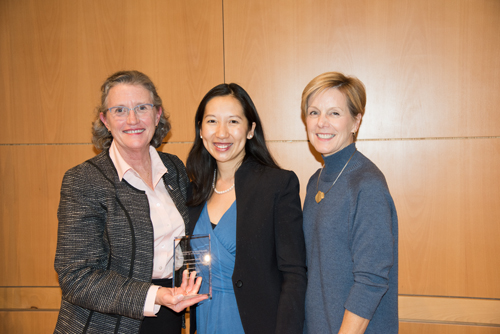 Wen’s remarks about Trump’s declaration were at the forefront of her address in the Millicent Geare Edmunds Lecture, part of the 2017-2018 Dean’s Lecture Series, titled “The Impact of Social Determinants on Health and Well-Being for Baltimore’s Communities: A Plan for Action.”

“It’s important to call out the issue,” said Wen. “So I’m glad that the President has mentioned the opioid epidemic. He’s telling stories of individuals that he’s encountered along the way who’ve died from overdose and who have the disease of addiction. I’m glad that we are addressing the issue.”

But it was the language of the declaration that gave her pause.

“He declared it a public health emergency, not a national state of emergency, and the difference there is not just in semantics,” she said. “Actually, there’s a big difference.” One comes with a specific commitment to funding. The other does not, she noted. A declaration of a public health emergency allows local governments to more flexibly spend federal funds they already have. It also eases restrictions on Medicaid funding for addiction treatment.

Wen described the scope of the opioid epidemic as “horrendous,” citing the staggering statistics of her city. Last year in Baltimore City, 694 people died from overdose, averaging two a day.

“What I understand of the declaration so far is that it will be repurposing existing funds, and public health funds, as all of you know, is quite limited and every time when it comes to making a budget, we always think about what do we have to cut in order to make this work?” said Wen, speaking to an audience of about 120 in the UMSON auditorium. “Are we going to stop funding HIV? Are we going to reduce funding for disease investigations? Are we going to stop restaurant inspections? What is the repurposing that will have to happen in order for us to address this epidemic?

“Think about how many families that affects, how many neighbors and friends and colleagues and how much it tears at the fabric of our city,” she said. “Think about all the people who may not die but have an addiction and are not able to get treated.”

An emergency physician, Wen recounted stories of patients coming into the emergency department constantly looking for help with their addictions, in particular one woman who arrived almost on a daily basis.

“Every time she would say, ‘I need help. I want a bed. I want to stop,’ " Wen recalled. “Every nurse, every social worker, every doctor, we all knew that she needed help. Her family knew she needed help. But every time we would have to tell her, ‘I’m sorry, maybe I can get you to see someone in a week.’ Maybe it’s three weeks, maybe it’s a month. And I want to know for what other disease would we ever find that statement to be acceptable?”

Only one in 10 patients with the disease of addiction will get treated, Wen said.

The social determinants of health — those factors that contribute to how well a person lives such as education, jobs, housing, transportation, and health care — are all-encompassing.

“We cannot see medicine as simply being about what happens within the four walls of a hospital. It’s about so much more,” Wen said.

In her “Call to Action,” Wen said there are three steps her office is taking to improve the social determinants of health in Baltimore:

Starting as early as possible. Early interventions work, Wen said, citing the impact of B’more for Healthy Babies as one example. The program, operated by the University of Maryland School of Social Work’s Promise Heights initiative, has led to a 40 percent reduction in infant mortality in the past seven years.

Telling stories. “We have to tell our stories, and specifically the stories of what a difference that policy, that intervention has made,” she said. “Remember that data can provide context, but stories compel action."

Fighting stigma with science. When Wen issued a blanket prescription for the opioid antidote naloxone to all 620,000 residents of Baltimore, critics said she was encouraging people to use more drugs. “We’ve been able to save more than 1,200 lives,” she said. “If someone is dying right now from a peanut allergy, would you say, ‘I am not going to give you an EpiPen because you may eat more peanuts next time?' ”

Similarly, critics said a needle exchange program that started more than 20 years ago would never work, Wen continued. Meanwhile, the incidence of HIV infection from intravenous drug use dropped from 63 percent in 1994 to 7 percent in 2014.

“That is the power of public health to save lives,” Wen said. “Serving our patients and serving our communities is not easy, but there is no more important time than now for us to do it.”

At a reception after the event, nursing students Elyse De Laittre and Kate Dunn said they were inspired by Wen’s remarks.

“She doesn’t appear to be afraid to take on the hard issues and call it like it is,” De Laittre said.

Added Dunn, “She’s able to simplify problems that have plagued our city for decades.”