“Protect yourself and others by getting the flu shot” was the message from Kathleen Neuzil, MD, MPH, FIDSA, Director of the Center for Vaccine Development (CVD) at the University of Maryland School of Medicine (UM SOM).

Neuzil was among the speakers at a press conference hosted by the National Foundation for Infectious Diseases. The panel members all received their flu shots following the press conference.

Neuzil cautioned that individuals 65 and older are at the highest risk of severe complications and even death. 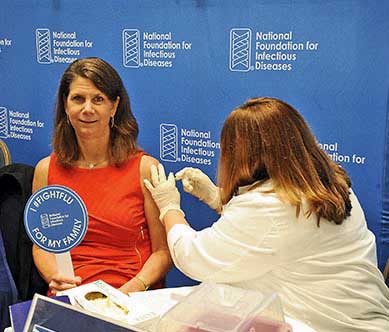 Kathleen Neuzil,Director of the Center for Vaccine Development (CVD) at the University of Maryland School of Medicine (UM SOM), gets her flu vaccine.

“As you age, your frailty increases and you are more likely to have severe consequences of influenza,” Neuzil said, noting that roughly 85 percent of flu-related deaths in the U.S. fall in this age group. Neuzil also explained that there are vaccines with stronger doses designed to accommodate aging immune systems. In addition to protecting our elderly population, the flu shot is an effective tool in stopping the spread of influenza to other vulnerable populations such as the very young or those with underlying heart conditions.

Officials at the press conference all agreed that flu seasons are difficult to predict and can range from mild to severe. Flu seasons are “predictably unpredictable,” Neuzil said, noting that it takes roughly two weeks after vaccination for the flu shot to begin working, so it’s best to get the flu shot as soon as possible.

According to recent data from the Centers for Disease Control and Prevention, influenza vaccination coverage for all ages across the U.S. was 46.8 percent during last year’s flu season. That means more than half of the U.S. population was unprotected from influenza. While coverage in older adults is better at 65.3 percent, it’s not good enough, according to Neuzil.

“It is critical to maintain the highest level of vaccination coverage for older adults because they are disproportionately affected by flu. Vaccination not only reduces the chance that older adults will get the flu, it can also help keep them out of the hospital by reducing the severity of the infection and related complications if they do get the flu,” Neuzil said.