In 2013, University of Maryland, Baltimore (UMB) President Jay A. Perman, MD, accompanied former Gov. Martin O’Malley on a trip to Israel. It was Perman’s first trip to the Middle Eastern country. 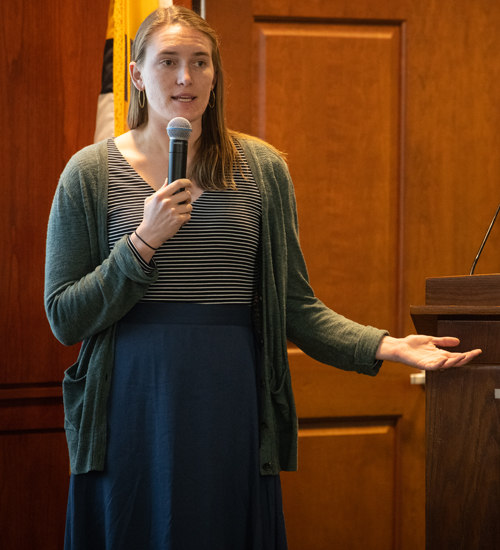 Flannery McArdle shares her experience as a participant of the Haifa Project.

Seeds planted on that journey would come to form a robust partnership between UMB and the University of Haifa (UH), Perman explained at an Oct. 29 gathering of friends and supporters celebrating the link between the two institutions. The event was hosted by the UMB Office of Philanthropy; Perman; Leonard Attman, member of the Board of Visitors of the R Adams Cowley Shock Trauma Center; Abba Poliakoff, JD, member of the University of Maryland School of Medicine Board of Visitors; and Steven Dubin, JD, and Alvin Katz, CPA, both members of the UMB Foundation Board of Trustees.

“I broke away from the group and went to visit the University of Haifa, where collaborations were already underway between our faculty,” Perman told the group of about 30 guests who gathered for the event in the President’s Boardroom in the Saratoga Building. UH sits on a hill overlooking the beautiful Mediterranean Sea, he noted.

“The faculty start telling me about how students from Baltimore can learn about social determinants of health, socioeconomic issues, in Haifa,” Perman said. “And remember, Haifa is beautiful. I could not imagine what a student could learn here in Haifa that was applicable to Baltimore, and then I got an education.

“It's the old story about you have to look deeper, you can't tell a book by its cover. And it was explained to me that Haifa is a complex city as well with diversity in terms of ethnic background, nationality, socioeconomic status. There’s plenty for our UMB students to learn in Haifa, and there’s plenty for the students in Haifa to learn at UMB. These are exceedingly valuable experiences for students.”

As a result of those early collaborations, in 2013 UMB’s Center for Global Education Initiatives (CGEI) and the UMB schools of social work, law, and nursing launched the Haifa Project, a partnership with UH to offer an interprofessional, global student course. It embodied Perman’s strategic vision to provide students with community-based, interdisciplinary training that fosters collaboration across professions and cultures, informs civic awareness, and develops cultural competencies that students will incorporate into their professional practice. Students from each partner university have the opportunity to travel overseas and learn about local approaches to promote participation of diverse populations around shared civic and social concerns. Students take these best practices back to their own work, better equipped to engage with others and bring about positive changes at home.

To date, the course has provided opportunities for more than 100 UMB and UH students and faculty members to work and learn alongside one another in experiential activities in Haifa and Baltimore.

The Haifa Project is led by UMB faculty member Corey Shdaimah, PhD, LLM, the Daniel Thursz Distinguished Professor of Social Justice at the University of Maryland School of Social Work and academic coordinator of dual-degree programs; and UH associate professor Roni Strier, PhD, founder and director of the Interdisciplinary Center for the Study of Poverty and Social Exclusion.

Baltimore and Haifa face similarly tough challenges, and the two universities are engaged in innovative and effective programs to meet those challenges, said Shdaimah, who first attended UH as an international student in 1984. “Both schools contribute to their local communities through student practica, field placements, and clinical programs as well as by producing professionals who continue to serve their communities.”

Through a video connection, Strier thanked supporters of the program.

“I have to say that purely my students, many of them will never, never, never remember any of my lectures. But I'm sure that they will never forget meeting with American students and American faculty,” he said. “Thank you for keeping this project alive.”

The Haifa Project operates under the auspices of UMB’s CGEI, explained Virginia Rowthorn, JD, LLM, executive director of CGEI and an adjunct faculty member at the Carey School of Law. The UH-UMB collaboration was one of the first projects supported by CGEI’s interprofessional global grant program for faculty and students in which small stipends and logistical support are given to faculty who incorporate students from more than one school into their global work.

CGEI’s support of a growing partnership between UH and UMB “has turned out to be one of our most impactful and long-lasting partnerships,” Rowthorn said.

For Flannery McArdle, MSW, MPH ’19 and Jahmya Ross, MSW ’18, both Haifa Project participants, the impact of their experiences at UH on their education was immeasurable.

McArdle had previously traveled to Israel to coach ultimate Frisbee and was struck by the division she saw while traveling to the West Bank.

“So naturally I jumped at the chance to travel back to Israel to gain a better understanding of this division and its impact on individuals and communities,” said McArdle, who studied at UH in 2017. “What I realized is that in the field that I studied, social work and public health, we often see other countries, particularly developing countries, as fertile ground for better understanding problems. I think what's really beautiful and really powerful about this program is that it’s really focused on finding and sharing solutions.”

“Without this program I may never have traveled to Israel. I can definitely say this program influenced the way that I view myself as a social worker,” Ross added. “It also influenced the work that I do now as a program manager at immigration refugee services, where some of those lessons that I learned about different communities coming together, being open to learning and experiencing new cultures, I bring that to my work every day and I remember this experience.”