Putting Healthy Habits on the Menu for Baltimore City Kids

Surrounded by fresh broccoli, apples, and eggplant, third-grade students from George Washington Elementary School, James McHenry Elementary/Middle School, and Robert Coleman Elementary School got a lesson in health and nutrition from the Kids To The Farmers Market Program.

The annual program is facilitated through a partnership between the University of Maryland, Baltimore’s (UMB) Office of Community Engagement (OCE) and the University of Maryland Medical Center (UMMC). The goal of the program is to show Baltimore City children how to be active and healthy through a hands-on learning program that introduces them to different fresh fruits and vegetables over the course of several weeks. 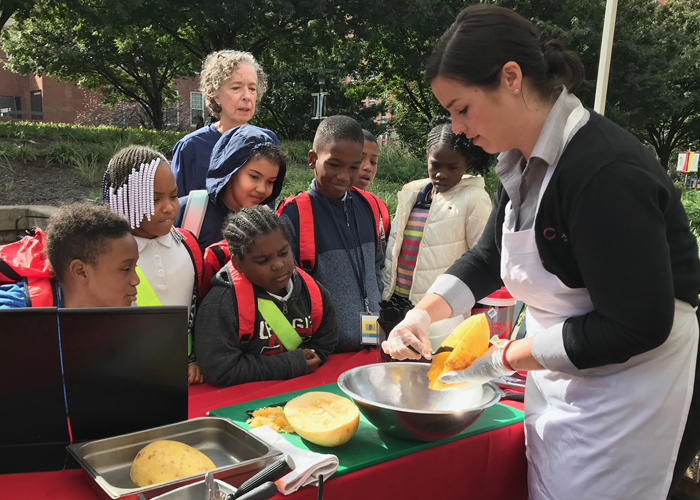 “It’s a lot of fun!” says Brian Sturdivant, MSW, the director of Strategic Initiatives and Community Partnerships for the OCE. “The kids and the volunteers have a great time doing it. Plus, it’s a great way to get our campus community involved in our community engagement activities.”

The program is set up like a three-course meal consisting of three interactive activities for the children to participate in. The first course is a classroom-style workshop led by nutritionists from UMMC along with public health students from the University of Maryland School of Medicine (UMSOM). They visit each of the three schools and teach the students how to make healthy meal choices using the different food groups.

“I think that this exposure is important,” says Jahi Omari, a second-year public health student at UMSOM. “I feel like a lot of these kids don’t have a lot of exposure to healthy fruits and vegetables at home, so getting that knowledge and background and then establishing an environment where they can actually eat them is important.”

After the classroom workshop comes the main course where the program gets its name, Kids To The Farmers Market. Over the course of three weeks, students from each school get to come out of the classroom for a field trip to the University Farmers Market. The market, which is open every Tuesday from mid-May to mid-November at the University Park Plaza across from the UMMC, dazzled the third-graders with its large display of colorful fruits and vegetables.

At the market, the children were given a refresher course on the food groups with a nutritional guessing game, followed by a healthy cooking demonstration. Volunteers from CulinArt showed the children how to prepare spaghetti squash, kale chips, and apple crisp — a healthy alternative to apple pie. The children got to taste each of the recipes prepared in the demonstration and all were given a recipe book with instructions on how to prepare them at home.

“I had never had kale or spaghetti squash before, but I liked both of them!” exclaimed 8-year-old Davion, a third-grader at Robert Coleman Elementary School. His face lit up when he realized he could get the same, satisfying crunch from kale as he could get from a potato chip.

After tasting the new foods at the cooking demonstration, Davion and his classmates headed over to the market. Each student was given $10 worth of “Farmers Market Bucks” to spend on fresh produce to bring home to their families. Eager to share the new recipes he learned with his grandmother, Davion bought apples, kale, and spaghetti squash. This is exactly what his teacher, Shannan Brown, was hoping for.

“I really want the students to go home and talk to their parents about what they learned and help them make better choices when they’re food shopping,” Brown says. “That way, they can learn and make healthy choices together.”

The Kids To The Farmers Market program did not end at the market. The third and final course of the program brought all three schools back to UMB on Oct. 29 for Food Play, an interactive, musical performance put on by the Hippodrome Foundation, Inc. in Westminster Hall.

The students clapped and danced along as the character, ToBe Fit — a play on the phrase “to be fit” — taught them about creating healthy eating habits, keeping a balanced diet, and making time to play and exercise. The performance included a juggling act, a food group guessing game, and magic tricks, all of which kept the third-graders engaged throughout the performance.

“I can’t say enough good things about the program,” says Kim Greve, RN, a nurse at UMMC and third-year volunteer to the program. “The kids really love it and at the same time they are learning about being active, eating healthy, prepping food, and also expanding their dietary repertoire.”

This is the fifth year that the Kids To The Farmer’s Market has taken place. The OCE and UMMC are looking forward to teaching another crop of third-graders about health and nutrition next fall.