For the 29th year in a row, the University of Maryland School of Medicine (UMSOM) led volunteers in providing Thanksgiving dinner for hundreds of West Baltimore residents.

The organizers of Project Feast, held Nov. 22 at Booker T. Washington Middle School for the Arts, said about 850 meals were served. Diners were treated to turkey, stuffing, potatoes and gravy, vegetables, and pie. Volunteers also wrapped plates for take-home purposes.

At Project Feast, more than half of the 94 University of Maryland, Baltimore (UMB) volunteers were from UMSOM, including 47 students and 10 staff and faculty members. Professor Sheri Slezak, MD, the longtime faculty adviser for the event, provided oversight such as conferring with the medical students who conducted health screenings. Dean E. Albert Reece, MD, PhD, MBA, who is also UMB executive vice president for medical affairs and the John Z. and Akiko K. Bowers Distinguished Professor at UMSOM, provided encouragement to volunteers who were going about a range of duties from the entry hall to the kitchen. 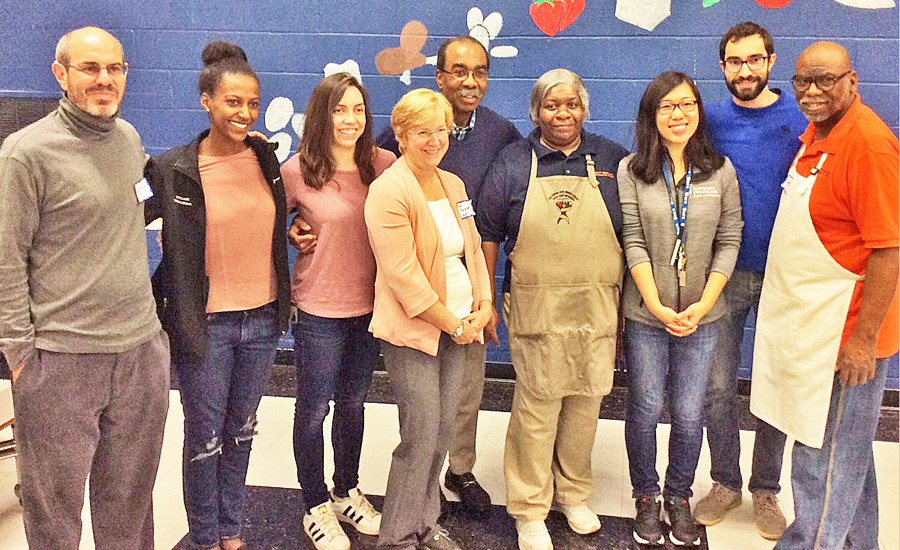 The meals of turkey and the traditional sides are but one aspect of an event that, in the eyes of diners and volunteers alike, seems greater than the sum of its parts.

“It’s the totality of it,” commented Alexander Thomopulos, one of Project Feast’s four organizers, who by tradition are second-year medical students. The event draws heavily from UMSOM but also from other schools at UMB and supporters well beyond.

Project Feast offers health information and screenings; a books giveaway; a selection of donated clothing, shoes, and non-perishable groceries; live music; a children's activities table, and a chance to connect with others. Many diners and volunteers return year after year, and some bring entire families.

“Good food, people, music, fun activities for kids. This is sort of a celebratory day,” said Thomopulos, explaining a vibe that resembles a family reunion. It’s multi-generational. “Old people who’ve lived through a lot; young ones enjoying the festivity.

“I encountered a mother with a young daughter,” he added, describing a child wearing a shirt with a butterfly applique. “They were both in such a good mood.” He says the mom savored her meal and the girl had enjoyed drawing during a stop at the activities table.

Organizer Victoria Chen said she had a moment to sit with two men who told her the Project Feast food tasted better than elsewhere. One, a retired history teacher, looks forward to the book bin. “He appreciates being able to pick out a book to take home.”

Organizer Natalia Perez said she volunteered during much of the day in the auditorium, where new and used clothing had been sorted and spread out in an array of men’s, women’s, and children’s’ items. Donations came from collection sites at the UMB Health Sciences and Human Services Library, the SMC Campus Center, the University of Maryland School of Dentistry, and two UMSOM sites. “People were very grateful that they could pick anything they needed, especially mothers with young children,” she said.

Elders enjoyed it, too. Patricia Johnson selected a dressy yellow coat as her two friends admired how well it fit her. “It’s a blessing,” she said of Project Feast.

Stacey B. Stephens, LCSW-C, a clinical instructor at the University of Maryland School of Social Work (UMSSW), directs the B’more for Healthy Babies program for Promise Heights, a UMSSW-led initiative though which UMB improves lives of children and their families at five public schools. As a volunteer, she was seeing people who engage regularly with Promise Heights programs in Upton/Druid Heights, where the middle school and its partner high school are located. “This is our neighborhood,” she said.

West Baltimore residents also volunteer. One is Kay Merrill, who said she appreciates UMSOM’s leadership not only in Project Feast but also in its Mini-Med School, a tuition-free lecture series that she has attended.

In the cafeteria, chef Sheila Travers of Baltimore City Public Schools and co-chef Clinton Tates presided over everyone from dishwashers to turkey carvers. On the line, third-year medical student Kali Stevens, one of the 2017 organizers, served side dishes in a shift she was sharing with her brother, Berkley Stevens. He and their parents had traveled from New Hampshire to spend Thanksgiving at Project Feast.

The Stevens were among several families of four or more who were volunteering.

Phebe and Mario Taylor brought their four children who range from age 7 to infancy. The Taylors were part of a group of more than 20 that represents All Nations Worship Assembly Baltimore each year. “This is his first time serving” as a volunteer, said Phebe Taylor of son Grant, 1.

But the multi-generational prize, if there were one, would go to first-time Project Feast volunteers in the family of Sarah Leupen, PhD, a senior lecturer in biological sciences at the University of Maryland, Baltimore County. She was accompanied by her husband, their 13-year old twin boys, and his parents, who are in their mid-70s.

Leupen volunteers elsewhere on a regular basis and was referred to Project Feast as a place where all ages are welcome. “I brought the kids pretty deliberately,” she says, adding that they sometimes do service projects around Catonsville, but usually to earn service hours and rarely with people who are struggling. “I was motivated to show them…there really is a big need out there.”

“The great volunteer turnout is really a testament to the kindness, compassion, and charity of everyone in the UMB and local Baltimore community,” Chen said. ”After being at the event as a volunteer last year and then volunteer chair this year, I am in awe at the sense of community and positivity that radiates from the volunteers and guests who participate in Project Feast.”

Many past volunteers sign up without urging. University of Maryland School of Pharmacy (UMSOP) student Samuel Anti worked the health information displays in 2017 and 2018, joined this year by four other students representing two different organizations at UMSOP.

Maryland Carey Law student Mihir Baxi was a three-timer, as was Meghan Levis, BSN ’17, who first volunteered while a student at the University of Maryland School of Nursing. Levis, a pediatric nurse, was pleased to spend her shift engaging with a dozen children up to about age 6. They chose pictures to color, picked out stickers to make patterns or decorate with, and used paper strands to make bracelets.

“When people initially think about giving back to the community, they think about donating food or feeding the homeless population,” said Levis, noting that children are often brought up in these difficult life circumstances as well.

“When people reflect on their own Thanksgiving holiday, a few things that come to mind include family, lots of food, everyone in one room, a warm house, and happy conversation,” she said. “Without events like Project Feast, many of the kids who showed up on Thanksgiving Day would not have these memories.”