With the help of mass spectrometry imaging (MSI), researchers showed that specific mammalian lipids could also provide protection against the same infection. Their discovery offers hope for future treatment of vulnerable patients in hospitals or development of preventative treatments for travellers to risk areas in certain parts of the world.

The findings of the research team, "Host-based lipid inflammation drives pathogenesis in Francisella infection," were published Nov. 6 in Proceedings of the National Academy of Sciences (PNAS) on an early edition basis in the category, "Biological Sciences - Microbiology." (View supporting information posted by PNAS.) 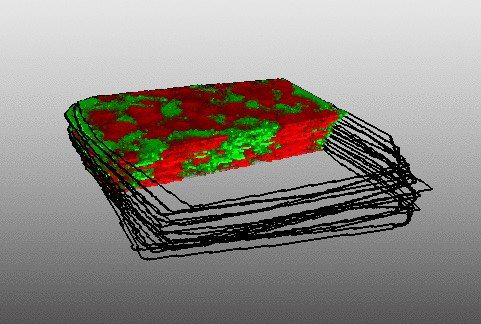 Mass Spectrometry Imaging
Mass spectrometry imaging is an imaging technique in which molecular maps of a pathological tissue section can be compiled from a single experiment. Researchers use the technique to determine exactly where certain molecules are located and how their distribution is affected by pathogenic bacteria, for instance. "This technique enables us to analyse thousands of molecules with a single measurement," Heeren explains. "What is special about our research is that we were able to use this method in order to capture for the first time the molecular changes which occur during a bacterial infection, mainly revealing the role of lipids in the further evolution of such an inflammation. This result means that we’ll be able in future to determine the severity of an infection accurately within half an hour. Based on the type of lipid, we’ll also know how the inflammation will behave in a patient."

Protect or Accelerate
To test their ability to use MSI to track disease progression, the scientists injected a healthy mouse with the highly pathogenic bacteria Francisella novicida (Fn). Through MSI, the researchers were then able to create an accurate molecular map of the infection's evolution, predominantly based on lipids. In doing so, it became clear that certain lipids significantly accelerated the infection, although these lipids should never be seen as separate from their spatial context in the tissue. "The distribution of lipids in the host - the patient - appears to have a tremendous effect on the immune system. For this reason, lipids are a strong determining factor in the aggressiveness of a bacterial infection," Heeren concludes. “It is now important to establish a kind of library, in which we can precisely identify which lipids play a role in accelerating infection and which lipids have a positive effect on the immune response.”

Scott says she hopes that this knowledge will help develop drugs that could be used to treat vulnerable patients and help them form the right lipids in the right places to dampen infection.

Applicability of Study
Although the researchers specifically used MSI to track Fn infection in this study, the techniques could be applied to a wide range of diseases. “The methodology underlying the study is relevant to any infection and positions us to expand work in the field of the role of lipids in both the bacteria and the host. It allows researchers to identify host-based pathways for therapeutic treatment to control bacterial infection and inflammation. I hope to start looking at airway infections such as pseudomonas,” says Scott.

This kind of research is only made possible by collaborations across disciplines. “This study shows the value of highly collaborative projects bringing together microbiologists and mass spectrometry experts to define the finite interactions between a bacteria and a host,” says Ernst.

The research presented here opens up many research avenues, both into the applicability of MSI for disease studies and the development of therapeutics that target lipids to treat infection, according to Ernst and colleagues, who include Kari Ann Shirey, PhD, assistant professor in UMSOM's Department of Microbiology and Immunology.