“Every great dream begins with a dreamer.”

Those words of Harriet Tubman fittingly began the University of Maryland, Baltimore’s (UMB) 21st Founders Week Gala. The promise of youth pervaded the Baltimore Hilton on Nov. 5 as a crowd of 500-plus was treated to an inspiring evening. (Photo Gallery)

During its nearly 210-year history, UMB has built a global reputation for advancing health and driving scientific discovery. But much closer to home, in its West Baltimore neighborhood, UMB is equally committed to enriching young lives through outreach programs like Promise Heights and UMB CURE Scholars that urge children to fearlessly change the world. The kids of today can be UMB’s stars of tomorrow.

To drive home the point, a video at the Gala showed five CURE scholars, middle school students whose excitement about possible careers in science is currently being molded by UMB mentors. However, in the video, filmed on the playground at Franklin Square Elementary/Middle School, where some of them attend school, the scholars’ names are changed to those of UMB’s four 2016 Founders Week Award winners and UMB President Jay A. Perman, MD.

“Jay, you should be a doctor when you grow up,” says Courtney Jacobs, portraying Entrepreneur of the Year William F. Regine, MD, FACR, FACRO, executive director of the Maryland Proton Treatment Center. “That’s what I want to do. And I want to open a center to cure cancer.”

Zykera Jenkins, portraying Public Servant of the Year Bronwyn Mayden, MSW, executive director of Promise Heights, says, “I want to help children like us when I grow up.” 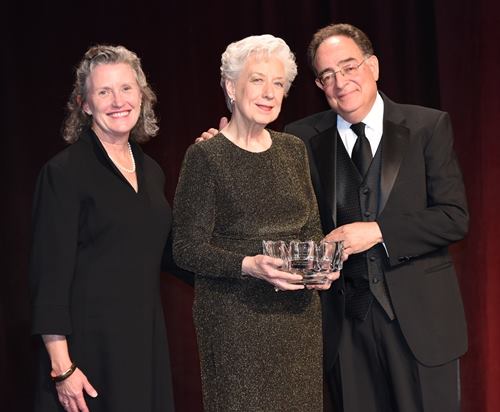 Louise Jenkins receives the Teacher of the Year award with Dr. Perman and School of Nursing Dean Jane Kirschling.

Markia Eubanks — playing Teacher of the Year Louise S. Jenkins, PhD, RN, FAHA, ANEF — says, “I want to be a nurse and a teacher.”

And Ayishat Yussef baffles the youngsters by saying “I want to be a medical researcher and help shape state and federal policy surrounding prescription drug abuse,” as Researcher of the Year Linda Simoni-Wastila, BSPharm, MSPH, PhD, has done.

Then the “real” Jay Perman was joined onstage by the young man who portrayed him, Shakeer Franklin. “I think Shakeer might be here to take my job," joked Perman, a pediatric gastroenterologist whose affection for children has only grown since becoming UMB president in 2010.

The video participants were among the special guests at the Gala from programs UMB has developed to strengthen families and neighborhoods in West Baltimore and boost student achievement.

Led by the School of Social Work at UMB, Promise Heights is another UMB outreach program at work in several neighborhood schools near the University. It is convening dozens of community partners to provide a comprehensive continuum of services — cradle to career — that enables families to thrive and students to succeed. Some friends from Promise Heights were on hand to salute Mayden, assistant dean at the School of Social Work, who grew up in the very Upton/Druid Heights neighborhood she is now working to strengthen.

The Community Engagement Center that UMB opened a year ago also has made a big impact, providing health screenings and wellness courses, advising neighbors on legal and financial matters, preparing residents for stable, good-paying jobs, and much more. Perman couldn’t be prouder.

“I can't emphasize enough that impact doesn't happen overnight. It is slow, challenging, sometimes agonizing work," Perman said. "But long before we have deep and reliable data on health indicators, or test scores, or jobs, or incomes, we have this: In less than a year, 1,700 neighbors have visited the Community Engagement Center. Another 500 faculty, staff, and students have served at the center. That means 2,200 people are reaching out to each other -- across everything that divides us. And that's a start.”

In addition to Mayden, Entrepreneur of the Year Regine of the School of Medicine was saluted for his 10 years of effort that resulted in the opening of the Maryland Proton Treatment Center, the first of its kind in the Baltimore-Washington region. Researcher of the Year Simoni-Wastila of the School of Pharmacy was praised for carving out a niche in the rapidly expanding area of health policy research, her work focusing on drug abuse and mental health in vulnerable populations. And Teacher of the Year Jenkins was lauded for 20 years of service at the School of Nursing, rising as a pioneer in the application of technology.

Ultimately, the black-tie Gala is about thanking generous donors and fostering future support. Thomas J. Sullivan, CFRE, MS, UMB’s new chief development officer and vice president, was introduced. Meshelle, the Indie-Mom of Comedy, brought the CURE scholars onstage and urged the audience members to open their hearts and wallets to support them before closing the Gala program with her stand-up comedy act.

Perman was effusive in his praise of those at the Gala, pointing out that programs like CURE Scholars and Promise Heights, and UMB’s Community Engagement Center, wouldn’t exist without donations.

“Words can’t adequately express my thanks,” he said.