Perman Commends "All In" Efforts to Promote UMB

The roles were reversed on Nov. 17 at an Employee of the Month event, and UMB President Jay A. Perman, MD, was loving it.

“Who’s flashing?” he asked as photos were being taken. “Me, sorry,” Alex Likowski, director of media relations, said apologetically before a room of Communications and Public Affairs (CPA) staff.

“No, keep doing it,” Perman responded with a smile, “because that’s what she does to me.” 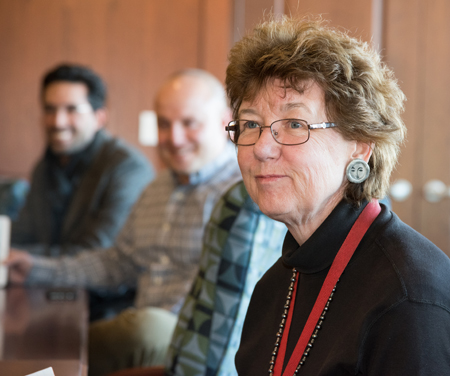 “She” is Patricia Fanning, who as senior media relations specialist in CPA does a lot more than take Perman’s picture at events. UMB’s November Employee of the Month “is the hardest and longest working, most dedicated, and most caring employee any of us in CPA knows,” Likowski said in his nomination.

He spoke of the yeoman effort Fanning made in placing a series of stories involving the Renaissance Academy (RA) and student Khalil Bridges. RA sits in one of the city’s poorest, most violent neighborhoods. Before June, the headlines it earned were roundly tragic. Three of Renaissance’s students were killed during the last year — one of them stabbed in biology class. But RA also is a Promise Heights school, which means members of the School of Social Work (SSW) are in the school every day, lifting graduation rates and spirits.

Fanning’s years of work behind the scenes paid off last summer. The Sun ran “Renaissance Academy High grieves after three killings, still sees hope for future” and then a follow-up story about the aspirations of RA graduates. The Washington Post followed with “Coming of age in a city coming apart,” which also referenced Promise Heights and the SSW. Still not finished, Fanning helped SSW colleagues write letters to the editor that appeared in The Sun and The Post, continuing the momentum.

Then, on June 23, The Post ran “Soar Khalil Soar.” The story, about how Bridges graduated from RA last spring against heartbreaking odds, touched heartstrings and purse strings. Within a week, donations to a college fund set up for Khalil outstripped the $30,000 goal.

Fanning, who worked for The Sun for 23 years before coming to UMB in 2009, said she surmounted various obstacles in placing the RA stories.

“I remember coaxing Khalil, who just days before had turned 18, to speak to a TV crew awaiting an interview. That required impromptu media training, with encouragement from the SSW’s Community Schools coordinator, on a rowhouse stoop across the street from his school. Separately, I persuaded Khalil to retool his letter to Baltimore City Public Schools officials as a letter to the editor, which I placed in The Sun to raise his and UMB’s public profile.”

But doing what’s in her job description isn’t the only thing that makes Fanning stand out to her colleagues. It’s things like at 6:30 p.m. Friday, most of her co-workers long gone, getting ready to transport food that had been refrigerated after a University event earlier in the day to an extended family living nearby. What’s more, it’s her having helped three children in that family enroll in A Bridge to Academic Excellence, a tutoring program based at the School of Pharmacy (SOP). And it’s doing outreach for her Howard County neighbors as well as the West Baltimore neighbors she works with at UMB.

As Laura Kozak, MA, associate vice president in CPA, pointed out at the Employee of the Month ceremony, Fanning works with icepacks on her jaw right after dental surgery and staves off Lyme disease to finish assignments related to SSW and the School of Nursing (her previous beats) and to current duties of UMB community engagement, SOP, and the School of Dentistry.

So sure enough, after the Renaissance Academy series of stories had abated and the TV crews had left, Fanning went a step further. “I have continued to keep up with Khalil,” she says. “I went to Jo-Ann Fabrics and made a scrapbook for his mom. Later I found one of my son’s childhood friends in Khalil’s chosen field who is now serving as a mentor.”

What does the award mean to Fanning?

“It’s a validation of the teamwork and relationships required to accomplish either personal or institutional goals,” she says. “The 2016 Promise Heights coverage actually began in 2014 with The Sun’s ‘Collateral Damage’ series that involved my connecting former colleagues at the paper with people at SSW and with West Baltimore residents whom I had come to know through Promise Heights.”

And she’s not done contributing, be it at UMB or in Howard County, where she chairs outreach for her church, helps the homeless, assists Habitat for Humanity-related projects, and volunteers with the Parks Department at GreenFest.

She says it’s her way of saying thanks.

“Years ago after a horrific car accident, my life was spared by first responders and trauma surgeons. I’ve felt compelled to make good use of that gift ever since.”