As the school year comes to a close for students in West Baltimore, 93 UMB CURE Scholars gathered together to celebrate another year of achievements at the CURE End of Year Ceremony.

The Saturday event began with a warm welcome from University of Maryland, Baltimore (UMB) President Jay A. Perman, MD. He took a moment to look back on the conception of the UMB CURE Scholars Program, which was the first such academic enrichment program in the country to introduce a pipeline to careers in STEM to students as young as sixth grade. 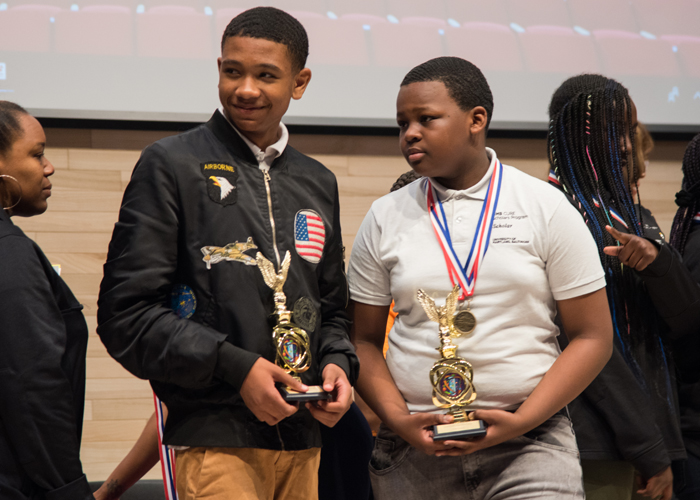 Khamari Stubbs (left), a Cohort 4 CURE Scholar, and Jaylen Galmore, a Cohort 3 CURE Scholar, accept their trophies for coming in first place at the 2019 CURE STEM Expo in the anatomy curriculum category.

“I’ll be honest with you, we didn’t know for sure that the program would work. It was one-of-a-kind, so there was a lot of risk,” Perman told the scholars on May 4 in Leadership Hall, part of the University of Maryland School of Medicine. “But every new year and with every new class of scholars, it just gets better and better because you make the difference. In my nine years leading this University, I can tell you truthfully that I’m not prouder of anything or anyone than I am of you.”

Each of the scholars, along with their parents and UMB mentors, many of whom were in attendance, had a lot to be proud of this year. During the End of Year Ceremony, they celebrated the achievements of four cohorts of scholars, including a brand-new extension of the program called CURE Connections (C2). Funded by the National Institute of General Medical Sciences’ Science Education Partnership Award (SEPA), C2 is catered toward students in ninth and 10th grade aimed at getting them prepped for college applications while also helping them navigate the challenges of high school.

It’s traditional to select a scholar to be the keynote speaker at the End of Year Ceremony to talk about his or her experience with the program. This year, Levan Sakie, a rising eighth-grade student in Cohort 3, was selected to speak. He talked about the challenges of emigrating from Liberia to America and how his family members, teachers, and mentors helped him to succeed both in and out of the classroom.

“I came to this country at the age of 9 years old,” he said. “School in America was different from school in Liberia. When I transferred to Southwest Baltimore Charter School, my mom was still in Liberia, so I wasn’t really comfortable. Thankfully, I had my aunt and uncle, my cousin, and an incredible teacher to turn to for help.”

He went on to explain that in the fifth grade his cousin helped him create a school project on climate change that caught the attention of a CURE staff member, who suggested he apply for the UMB CURE Scholars Program, which now enrolls 100-plus students from three West Baltimore middle schools and seven area high schools.

“My aunt and uncle were thrilled!” Sakie continued. “They said that they didn’t have these kinds of opportunities when they were children.”

Since joining the program, Sakie has spent two years in the robotics and coding track. He also has had several opportunities to present a research poster on Robotic Prosthetic Eyes and Ocular Cancer in the program, which is funded in part by the National Cancer Institute’s Continuing Umbrella of Research Experiences (CURE).

“When I grow up, I want to be an electrical engineer,” said Sakie. “The work I’ve done with CURE has shown me how this can connect to health care and cancer.”

After delivering his keynote speech, Sakie was presented with the first award of the day, the Science Technology Engineering and Mathematics Exposition Award for demonstrating leadership, one of UMB’s seven core values.

The day continued with more awards for each of the scholars in different categories of achievement including Scholar of the Month, Perfect Attendance, Academic Excellence, and Star Performance Awards. There was also a section of awards to personally thank the teachers and mentors who helped to guide each of the scholars through another academic year. The program is designed to offer scholars a 5:1 mentor-to-scholar ratio with an after-school component, Saturday tutoring component, and six-week Summer Enrichment component.

The most anticipated awards for the scholars were from the CURE STEM Expo that took place the week before on April 27 at the UM BioPark. The expo provided a platform for each of the scholars to showcase their individually selected research projects through poster presentations and compete for prizes in each of the CURE Curriculum tracks: anatomy, chemistry, coding/robotics, and MESA.

At the STEM Expo, dozens of mentors, scientists, and administrators were tasked with judging each of the scholars’ scientific posters and ranking them to declare a winner in each category.

Elsie Stines, DNP, MS, CRNP, assistant vice president and a member of the UMB CURE Program core leadership team, challenged the judges to go even farther in interacting with the competing scholars. The students are expected to absorb feedback and facts during the give-and-take. She gave an anecdote from her own role as a judge the year before.

“A student was telling me that unhealthy diet can contribute to liver cancer. I questioned him about obesity,” she recalled. After telling the scholar and his study partner that obesity can have an impact on the disease, she proceeded to the next poster. Soon, she overheard the previous scholar talking about the role of obesity. “He went on to tell the next judge what he had just learned.”

The takeaway: “We need anything you can add to educate them. They value that so much,” said Stines.

Judges had three minutes each to review 35 posters and grade scholars’ presentations in the Discovery Auditorium and another room. Upstairs, a second group of judges was asked to rate the work of members of Cohort 1, who each chose a health disparity that is meaningful to them.

Judges included many UMB participants as well as others, such as Nicole E. McNeil-Ford, PhD, health scientist administrator at the NCI’s Center to Reduce Cancer Health Disparities, and Dwight Carr, MS, the STEM program manager at the Johns Hopkins University Applied Physics Laboratory, who has guided the scholars’ participation in the Maryland MESA program.

As the CURE End of Year Ceremony came to a close, the scholars and their mentors looked ahead to the future. Tyler McKenzie, the C2 council president and rising 10th-grader in Cohort 1, took the stage to offer some words of wisdom to the rising ninth-graders before they entered high school.

“Always remember that you can achieve your goals, but you have to put in the work,” he told his fellow scholars. “High school isn’t a walk in the park, but the CURE Program is on your side. You have us, in Cohort 1, rooting for you, and we can’t wait for you all to join us this summer. Welcome to C2!”

The UMB CURE Scholars Program will be welcoming its fifth cohort of incoming sixth-graders in fall 2019.

Patricia Fanning contributed to this article.