One must look at how programs impact people to fully appreciate how the University of Maryland, Baltimore (UMB) serves the city, nation, and world. This was at the heart of the fifth annual State of the University Address — “UMB as a Public Good” — delivered May 9 by University President Jay A. Perman, MD. 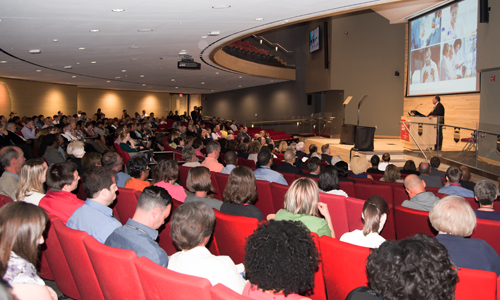 UMB’s outreach is mammoth in its scope, ranging from curing diseases in West Africa to finding jobs for those in West Baltimore, President Jay A. Perman, MD, told an audience of more than 350 staff, students, faculty, and guests who gathered in Leadership Hall.

In a passionate, hourlong presentation at Leadership Hall in the Medical School Teaching Facility, Perman detailed how far UMB has come as well as his goals for its future.

UMB’s outreach is mammoth in its scope, ranging from curing diseases in West Africa to finding jobs for those in West Baltimore. The Immigration Clinic at Francis King Carey School of Law helping asylum seekers to UM Ventures startup Harpoon Medical revolutionizing heart surgery and being acquired for $250 million. School of Dentistry students aiding 900 needy neighbors at Mission of Mercy at the Convention Center to UMB teaming with the University of Maryland, College Park using virtual reality to help Prince George’s County police officers uncover their own unconscious bias, among other collaborative projects.

“So when I say that we serve the public good, these are the stories I’m talking about. This is what matters.”

In perhaps the “wow” moment of his address, Perman told the audience of more than 350 UMB staff, students, faculty, and guests of how UMB’s Community Engagement Center (CEC) will expand its services to neighbors. The CEC is planning to move from its storefront on West Baltimore Street to an empty 20,000-square-foot building around the corner on Poppleton Street.

“Now 2½ years old, with 20,000 neighbor visits, I think we can safely say the CEC is a hit,” Perman said of the after-school activities, workforce readiness programs, legal advice, health screenings, fitness classes, fresh food markets, community meals, and more held there. The bigger building, currently owned by Carter Memorial Church, whose congregants worship across the street, will have space enough for a dance studio, a multipurpose room for community events, and safe, supervised areas for children to play.

“The property needs a lot of work, and this will be a key fundraising priority for us,” Perman said. “But we have a number of public and private partners who want to be part of this project, and we’re confident we’ll be able to move it forward quickly.”

He also spoke about a proposed Gateway Building at the northwest corner of Baltimore Street and Martin Luther King Jr. Boulevard (it’s conceived as a mixed-use development: hotel, residential, labs, offices) and other BioPark projects. And he mentioned a building recently completed: Health Sciences Facility III, a 10-story, $305 million research building, and its impact on UMB’s burgeoning research enterprise.

“Part of this success is due to HSF III, where we already have renowned research faculty working. And over the past couple of years, we’ve seen strong growth in federal research funding, from NIH and other agencies.”

One of the research targets UMB has attacked is opioid abuse, which killed more than 1,500 Marylanders in the first three quarters of last year, over five people a day.

“There is no university better equipped to address this epidemic than UMB,” Perman said. “With our mix of health, law, and social work, we can be the state’s go-to ally in research, care, and advocacy. Our Center for Addiction Research, Education, and Service [CARES], co-led by our Schools of Pharmacy and Social Work, is a UMB-wide effort. All seven schools. Together, we’ll train a workforce dedicated to substance use disorders. We’ll develop new models of care. We’ll gather and analyze data on addiction to get ahead of the problem. We’ll advise policymakers on science-based prevention and intervention.”

Opioids is one of the Big Ideas addressed in UMB’s Catalyst fundraising campaign, which is more than halfway to its $750 million goal by 2020. In discussing philanthropy Perman also cited generous gifts made to the University by the likes of UMB Foundation board member Theo Rodgers, Bedford Falls Foundation leaders Bill and Joanne Conway, and Dr. Robert Fischell.

Several of UMB’s researchers have moved on to more prominent roles in recent months, Perman pointed out. Robert Redfield, MD, left the School of Medicine and Institute of Human Virology to be head of the federal Centers for Disease Control and Prevention. Jody Olsen, PhD, MSW, moved from the School of Social Work and Center for Global Education Initiatives to be director of the Peace Corps. “We are so proud,” Perman said.

Keeping tuition affordable, supplying students with an innovation center (The Grid) to network, dual agreements with other institutions, the Graduate School developing a slate of professional master’s programs, faculty diversity, closing geographic gaps in health care, local food connections, and more were discussed by Perman in his annual address, which grew out of the transparency and accountability component of UMB’s 2011-2016 strategic plan.

In the end, he said it is people who turn “UMB as a Public Good” into “UMB for the Public Good.”

“I know what we mean to people, both at home and around the world, who’ve never heard our name but were saved or strengthened by our work,” Perman said. “I know that our scholarship shrinks the unknown, diminishes the untried, and expands our human capacity — not just for knowledge and technique, but for care and compassion.

“I know that every day we create a world where questions are welcomed, limitations are tested, curiosity is rewarded, and facts matter. … So thank you for the love, joy, and hard work you put into making this University as powerful and as special as it is. I will thank you for acting, always, in service of the public good.”

Read the transcript of the speech here.