‌University of Maryland School of Medicine (UMSOM) Dean E. Albert Reece, MD, PhD, MBA, announced that the school will receive $20 million in philanthropic support from one of its most distinguished, longtime board members and benefactors, Robert E. Fischell, ScD.

The gift, which will be used to transform UMSOM into a major center for bioengineering innovation, is part of Fischell’s longstanding commitment to integrating the fields of medicine and engineering for the benefit of society.

The gift was announced May 5 at the 2018 School of Medicine Gala. Click here to read about the gala, view gala videos, and browse a photo gallery. 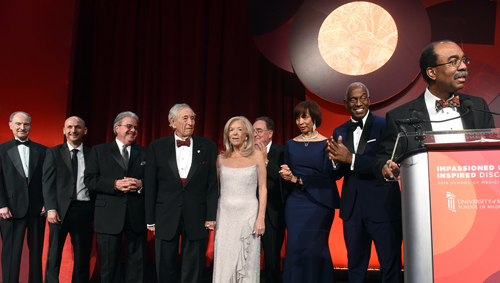 Robert and Susan Fischell are honored by Dean Reece and other dignitaries at the 2018 School of Medicine Gala.

“Increasingly, the solutions to our most complex health problems will be found at the intersections of medicine, engineering, and business,” said Reece, who is also executive vice president for medical affairs at the University of Maryland, Baltimore (UMB) and the John Z. and Akiko K. Bowers Distinguished Professor. “This generous gift from Dr. Fischell will elevate the UMSOM as a national leader in making innovative discoveries and developing new medical technology in ways that will have direct benefit to patients around the world.”

Fischell, known for inventing life-saving medical devices, is one of the nation’s most innovative and successful technology entrepreneurs. In 2016, he received the National Medal for Technology and Innovation from President Obama at the White House, the highest honor for technological innovation bestowed by the president of the United States. In 2015, he was inducted into the National Academy of Inventors. He holds more than 200 patents, including nearly 30 patents on orbiting spacecraft, and is credited with pioneering the modern era of space satellites. Fischell has invented or helped to invent several important medical devices, including coronary artery stents, the implantable heart defibrillator, the implantable insulin pump, a device to prevent migraine headaches, and a device to prevent death from heart attacks.

“Robert Fischell is truly a ‘Renaissance Man’ for the 21st century,” Reece said. “The School of Medicine is deeply grateful to him for this transformational gift. We are so fortunate to have his wisdom, experience, and entrepreneurial spirit at the University of Maryland School of Medicine.”

UMB President Jay A. Perman, MD, said, “Dr. Fischell exemplifies all of the qualities and values that we hold dearly at UMB. We are forever thankful for his long-term support and service to our institution.”

The gift will be used to establish the Robert E. Fischell Center for Biomedical Innovation at UMSOM and provide funding for the school's new 450,000-square-foot research building, Health Sciences Facility III. It also will provide critical support for research funds and endowed professorships at the Fischell Center.

“We are absolutely thrilled to have the opportunity to support the UMSOM in this way,” Fischell said.  “Our specific purpose for the new center is to help expand the UMSOM’s capacity for biomedical engineering so that it will produce new technologies and devices that will help treat our most critical and chronic diseases.”

For years, Fischell and his wife, Susan R. Fischell, have generously supported the school with major donations and gifts, including the endowment of the first dean’s professorship in honor of Reece. Claire Fraser, PhD, director of the Institute for Genome Sciences, was invested as the inaugural Dean’s Endowed Professor of Medicine.

Fischell earned a BS degree in mechanical engineering at Duke University before relocating to Maryland to work at the U.S. Naval Ordnance Lab in 1951 and then the Johns Hopkins Applied Physics Laboratory. In 1953, he earned a master’s degree in physics at the University of Maryland, College Park (UMCP), and in 1996, the university awarded him an honorary doctorate degree.

Fischell is an active member of the University of Maryland community, serving on the Board of Visitors of the A. James Clark School of Engineering at UMCP. His support helped establish the Fischell Department of Bioengineering in 2006 and the Robert E. Fischell Institute for Biomedical Devices at UMCP, which was inaugurated in 2016.

Fischell is a member of the National Academy of Engineering and is the recipient of many major honors, including Inventor of the Year for the United States in 1983, induction into the Space Technology Hall of Fame and the Clark School’s Innovation Hall of Fame, and an honorary doctorate for humane letters from Johns Hopkins University in 2008.

Fischell is known for inventing life-saving medical devices like the one shown in the video below.