As the two largest anchor institutions in West Baltimore, UMB and UMMC will work in partnership with surrounding neighborhoods to build and support a healthy, empowered, socially cohesive, and revitalized community.

“I am so happy to present to you these two gentlemen who not only do tremendous work in the areas of their responsibility, but they’re engaged and are about the work of edifying the people in our community,” Pierce said. “I am so honored and happy that they are here tonight.” 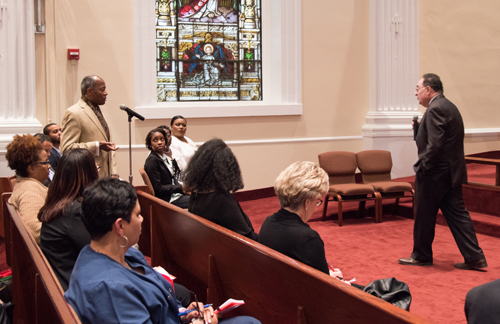 Wali Mutazammil, president of the Poppleton Community Neighborhood Association, poses a question to University of Maryland, Baltimore President Jay A. Perman, MD, at a town hall meeting for the Partnership for West Baltimore on May 4 at Carter Memorial Church of God In Christ.

Perman thanked Pierce for being a part of the “UMB family for many years” and thanked the 100 community members in attendance. “Thank you for being here but also for welcoming the University into your lives and your needs,” he said. “I think you know what we do in those big buildings over there and sometimes it looks intimidating and distant, but I know you understand that what we’re doing over there is preparing the health care workforce for our city and our state.”

UMB, he explained, produces the majority of physicians, nurses, lawyers, social workers, pharmacists, and dentists in the state. “It’s work that benefits all of us, our neighbors and the folks beyond this neighborhood,” he said.

Perman also praised the community for supporting the UMB Community Engagement Center (CEC) and for attending a Neighborhood Spring Festival held at the center on April 22. He promised the annual event would continue.

“Thank you for also welcoming our Community Engagement Center into the community,” Perman said. “This is a walk-in place on the western edge of the [University of Maryland] BioPark, just around the corner, where the University says ‘what can we do that you want us to do?’ ”

Based on the community’s input, the CEC offers a free legal advice clinic, workforce development, health education, exercise classes, a monthly community lunch, and weekly market, among other programs, all free of charge.

“We need to know from you, what else you want,” Perman said. “Most importantly, and this is the truth, we’re here to listen.”

Suntha noted that UMB and UMMC are often referred to as “anchor institutions,” a term that other universities and hospitals may define differently.

“What does it mean to be an anchor institution in any community?” he asked.  “I will argue that many hospitals in the past have made the mistake of saying the definition of being an anchor institution is delivering great health care. Well, I would say, that is a given. That is our responsibility. Delivering great health care is what is expected of us, but to be an anchor institution also means engaging with our community, outside the walls of our hospital, outside the walls of our university, and thinking about what are the challenges our community faces and where we might partner to work on collective solutions.”

The future of health care, he said, will focus more on finding ways to keep patients from being admitted into hospitals in the first place to manage conditions such as diabetes and high blood pressure.

Jo-Ann Williams, director of community and workforce engagement for UMMC, said currently the Medical Center provides health screenings for the community. For example, thanks to the Maryland Healthy Men Program, more than 1,000 African-American men were identified with high blood pressure out of more than 3,500 screened.

All programs are based on community input, said Williams. “What you hear from us tonight is based on what we’ve heard from you.”

A Back-to-School Health Fair will be held in late August and a mental health conference on June 27. As to other future programs, “we really want your opinion,” Williams said.

Ashley Valis, MSW, UMB’s executive director of strategic initiatives and community engagement, a resident of the community, and a graduate of the University of Maryland School of Social Work, explained the Partnership for West Baltimore has four main goals:

A new program at James McHenry Elementary/Middle School is just one example of collaboration among the community, the University and the Medical Center, Valis said. The program, called Girl Talk, grew out of a violence prevention program at the R Adams Cowley Shock Trauma Center. Girl Talk is a storytelling initiative for third-grade girls, overseen by Erin Walton, LCSW-C, violence prevention program clinical supervisor at Shock Trauma’s Center for injury Prevention and Policy, and Kelly Quinn, PhD, program coordinator at the CEC. Walton and Quinn developed lessons that foster active listening and creative expression for 8- and 9-year-olds. In total, 16 girls participated in two six-week workshops through the winter and early spring.

Questions and comments from the audience included requests for additional resources to combat substance abuse and addiction, the impact violence has on young children and the need for health screenings for oral cancer, among other topics.

Wali Mutazammil, president of the Poppleton Community Neighborhood Association, expressed concerns over what he described as a systemic culture of violence and racism in Baltimore.

“At any given 18-month cycle, we’re dealing with about 12 murders within a three-block radius.” he said.  “We consider that to be very normal. We live in an environment of trauma, where we think that is normal. My question is how are our children in this systemic culture of violence and racism?”

“We’re not so far away, “ Perman responded.  “We’re in this together, as it relates to crime.”  The University president went on to describe how the UMB CURE Scholars Program, which provides science and health care educational opportunities and mentoring for middle school students in UMB partner schools in West Baltimore, is aimed at improving the outcomes for youths in the community.

Another resident shared a positive experience she recently encountered at the CEC.

“I just want to say thank you. I just lost my job earlier in the week and I came to Workforce Wednesday [which provides job services at the CEC] and those counselors were great,” the woman said. “They provided excellent customer service. All I can say is that they deserve the biggest hand we can give them.”

Valis also debuted a new website for the partnership:www.UMPartnershipforWestBaltimore.org.

“We really do want this to be a community partnership and meet the community’s needs as best we can,” she said.