‘Tis the season of graduations, where parents celebrate the accomplishments of their children.

Thirteen parents were recognized for graduating from Parent University, an eight-week parent-training curriculum for West Baltimore parents of children from birth to 3 years old. The program aims to increase responsive parenting and child development through parent/child interaction. The initiative, which has helped 150 families since its inception in 2009, is part of the University of Maryland School of Social Work’s Promise Heights Initiative.

“Today, it’s about you and it’s about your children. We celebrate you and all of the great work that you are doing here," Bronwyn Mayden, MSW, assistant dean of the School of Social Work (SSW) and executive director of Promise Heights, told the graduates and their families at a ceremony April 25 at the Crispus Attucks Recreation Center. “We know that parents really are the first teachers of their children, and we are so proud that you are here with us and you have gone through over eight weeks with us. We’ve learned a whole lot about brain development, about discipline, about talking to your kids, health and safety and nutrition, and I could go on and on.” 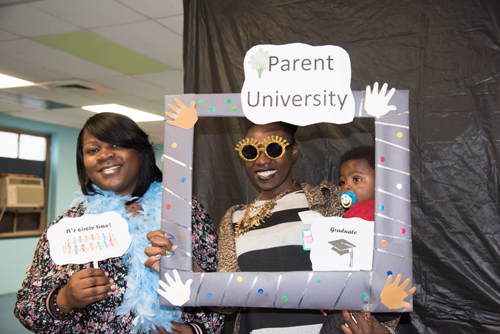 A lot of parents in the Upton/Druid Heights neighborhood — Promise Heights’ main geographic focus — can become isolated because of violence in the neighborhood, Liggett-Creel said after the ceremony. “And so some of the natural socializing that typically takes place with parents in a neighborhood isn’t there,” she explained.

Through Parent University, moms and dads build a network of support that lasts long after the last class is over, Liggett-Creel said. “Now, they see each other in the grocery store and there is a familiar face. We are helping to change the culture of parenting in the community.”

Brenda Martin, who graduated from Parent University with 11-month-old Zoey, said she considered the program a blessing.

“I really enjoyed it,” Martin said. “They made us aware of a lot of different resources available for the baby.”

Fellow graduate Tawanda Thompson said that she learned new ways of interacting with her 18-month-old son, DeShaun, and that she was not alone in dealing with the hardships of parenting.

“I learned to share my struggles with other parents, and we all gave each other ideas of how to deal with things in a better way,” said Thompson.

“Sometimes parents just need some extra guidance,” added Thompson’s mother, Eva Bullock, who was on hand to watch her daughter and grandson graduate from the program.

“We know that children who are exposed to lots of quality interaction with their parents have the best chance of success in school and in life,” he said. “Parent University helps to reduce harsh parenting and to change the culture of parenting to be more positive and more stimulating.”

The initiative has expanded to provide intervention for parents of 4- and 5-year-olds. The new program, called Parent University II, is based on a similar project in Chicago and addresses topics such as child-centered time, routines, challenging behavior, and managing stress.

Barth praised the graduates for persevering.

“It’s hard when you are so immersed in parenting to take time to reflect and to step back and know you need something more. I know I needed something more the first time I went through parenting. I wish I had Parent University,” he said.  “I’m so glad that you do, that you’ve learned additional ways to succeed as parents, to make parenting less stressful and to make parenting more positive. And you’ve shown not just an interest in parenting but a commitment to parenting by finishing this program. We hope this is just the beginning of your journey with us.”

“Relax a little bit and let someone else help you,” Nelson advised the graduates. A self-described “control freak,” Nelson said, “Parent University was a blessing to me and definitely a blessing to my family. I appreciate you all for finishing strong. You took the time to do something for your kids.”

Mary Ricks, a previous Parent University graduate, benefited from the program so much that she is now a parent mentor.

“Some of these parents never graduated from high school,” she said. “I love seeing this today, the end result, this graduation ceremony and the pride they have in completing something.”

Rev. Lester A. McCorn, DMin, senior pastor, Pennsylvania Avenue AME Zion Church, provided the keynote address, sharing his personal story of living in the public housing projects and being the product of a single-parent household, who never knew his father.

“You may not see it right now,” he told the parents, “but there are advocates for you, parents, that will someday stand in the gap for you. Let people help you celebrate. There are people here who have seen this milestone in your life. Don’t walk past it.”