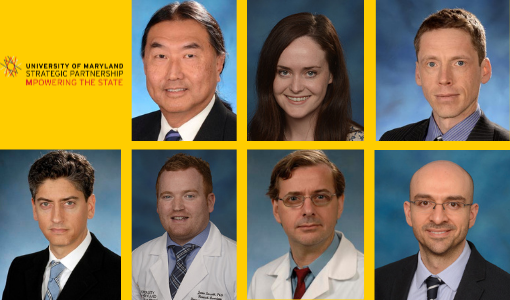 The mission of the BHHP seed grant program is to facilitate collaborations between UMCP and UMB and to promote complementary translational research. In this, the program’s final year, the BHHP’s enlarged focus includes research on nervous system injury, the neurobiology of aging, and neurodegeneration.

By bringing together researchers at both institutions, the BHHP seed program encourages research in three areas: the multimodal enhancement of human performance; the development of new models, analytics, biomarkers, and brain imaging techniques; and the advancement of “-omics” approaches, which endeavor to connect the different scales at which researchers study the brain — that is, from cell to synapse to circuit to behavioral output.

The five projects funded by the BHHP reflect these foci. They unite UMCP researchers from the College of Computer, Mathematical, and Natural Sciences and the School of Public Health with UMB researchers from five departments at the University of Maryland School of Medicine.

“Dysregulation of Endocannabinoid Signaling in the Aging Olfactory System”

Short-term memory loss — a common sign of aging and neurodegeneration — also is often accompanied by symptoms of olfactory dysfunction. Indeed, those who will experience dementia often lose their sense of smell before the onset of memory loss. Intuitively, this connection makes sense: olfactory perception — the detection, recognition, and discrimination of odors — is a process inherently shaped by memories of one’s experiences. The overlap of these phenomena gives rise to Kao, Puche, and Araneda’s hypothesis. The team posits that the process of aging dysregulates top-down cortical feedback control to the olfactory system. That is, the loss of sense of smell occurs because aging affects a group of signaling molecules that modulate synaptic transmission throughout the entire brain. The team’s approach will employ an improved method for studying neuromodulation — namely, new optically driven stimulation and interrogation paradigms — to open the door for new avenues of precision neurotransmitter modulation research in the neurophysiology community.

“Exercise Modulation of Systemic Immune Pathways and Neuroinflammation During Aging”

Aging is the most important risk factor for neurodegenerative diseases, and evidence supports the concept that age-related neurological decline is driven in part by ‘‘inflammaging,” the aging-induced chronic deficits in systemic immune function. Studies have established that a voluntary exercise program can address immune dysfunction and neurological impairments observed during aging. Barrett and Smith aim to uncover the particular molecular and cellular pathways that underpin the beneficial changes associated with exercise. Using high-throughput experimental techniques that provide a genome-wide analysis of RNA transcription and epigenetic pathways, Barrett and Smith will assess whether the beneficial effects of exercise are derived from its effects on peripheral immune function. Specifically, they will identify the program of molecular responses that reduce neuronal cell death and neuroinflammation and promote neuroplasticity in the hippocampus. This project is one of the first to dissect at single-cell resolution the transcriptomic pathways responsible for the exercise-induced modulation of the human immune system while simultaneously examining the impact of exercise on brain connectivity and function.

Although there is an established connection between the severity of traumatic brain injury (TBI) and obesity, the specific mechanistic drivers of obesity-induced exacerbations of neurological dysfunction following TBI are not yet clear. TBI and obesity are both characterized by dysfunctional inflammatory processes and cognitive deficits. Understanding the underlying mechanisms of these processes is important for the development of better therapeutic targets. Henry and Ranadive propose zeroing in on leptin, a hormone that is more prevalent among obese populations. Pre-existing obesity primes the immune system toward more pro-inflammatory states rather than to lessen inflammation — that is, to perform the inverse of its intended function — and the team posits that leptin is an important biomarker for assessing the impact of obesity on inflammation and, in turn, on increased TBI-induced neurological deficits. Henry and Ranadive will use an innovative RNA sequencing technique to uncover leptin’s molecular function and thus measure how changes in the immune system alter neuroinflammatory responses and neurological recovery following exposure to TBI.

Individuals with severe mental illness (SMI) — primarily schizophrenia spectrum, bipolar, and major depressive disorders — are between one-and-a-half and five times more likely to develop signs of Alzheimer’s dementia before age 70. Despite this fact, the causal mechanisms linking SMI and Alzheimer’s as well as the clinical implications of this connection are poorly understood, partly attributed to the large individual variation in age of onset and timing of aging effect. This has motivated research in using neurological, metabolomic or transcriptomic biomarkers to infer one’s brain age, which does not necessarily parallel one’s chronological age. The difference between the brain age and the chronological age is termed delta age. Positive delta age is a sign for accelerated aging and higher risk of dementia. Ma and Kochunov propose to develop machine learning models to predict brain age using large existing multimodal MRI datasets, and to calculate delta age for sizable population including both healthy controls and SMI patients. Then the team will combine delta age with genetic information and develop novel statistical methods to uncover the genetic modulators of accelerated brain aging. The end result will be a better understanding of the complex causal relationship between genetics, environment, brain aging, and SMI.

The regulation of the circadian “clock” by light is of great clinical significance for the study of aging. Circadian dysregulation results in more than lost sleep: It also is a risk factor for metabolic disorders that develop commonly in late adulthood like obesity and Type 2 diabetes as well as a symptom that, for many aged patients, accompanies neuropathologies such as Alzheimer’s disease. However, current research into circadian rhythm and aging relies on methods that fundamentally alter the object of study under consideration. Existing studies isolate and assess the circadian clock by eliminating a gene that creates melanopsin, a photopigment that supplies the means by which the clock receives light. However, this strategy of genetically isolating the clock also prevents the clock from developing normally, and thus it has not yet been possible to study a properly developed, isolated circadian clock for the purposes of aging research. Singer, Speer, Nemes, Poulopoulous, and Mathur propose to do just that. The team will develop a battery of experimental techniques necessary to manipulate and assess mature, normally developed circadian circuits. By establishing models for studies of circadian biology that do not rely on developmental knockouts of genes, the project represents a paradigm shift in the field.