CURE Is in the House … and Senate

Shayla Monroe, a sixth-grader in the University of Maryland, Baltimore (UMB) CURE Scholars Program, stood in the Old House Chamber of the Maryland General Assembly feeling empowered. She was staring intently at the newly erected bronze statues of Harriet Tubman and Frederick Douglass. The statues are fittingly on display in the room where slavery was abolished in Maryland back in 1864.

“It’s really cool to see Harriet Tubman and Fredrick Douglass here,” Shayla said. “It makes me feel really good to know how far we’ve come and where we are today.” 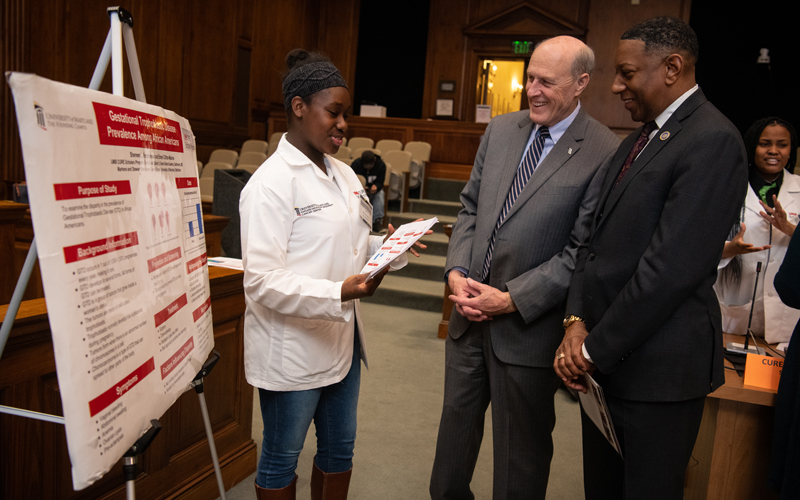 Shayla was one of 16 CURE Scholars who traveled to Annapolis on Feb. 24 for Advocacy Day. The annual event gives the scholars an opportunity to learn more about their local government and present their research posters to prominent lawmakers from across Maryland.

Funded by the National Cancer Institute, the UMB CURE Scholars Program is a unique mentoring program aimed at reducing racial disparities in public health by introducing a pipeline toward careers in STEM (science, technology, engineering, and math) to students in West Baltimore. The program begins in sixth grade and continues through high school, college, and beyond.

“I had the opportunity to speak with about three or four of the students about their research,” said Del. Keith Haynes, who represents the 44th legislative district in Maryland. “I am just amazed with the detail and the depth of their knowledge about all of these topics.”

The scholars each got to select a research topic that they were passionate about, so there were a wide variety of presentations ranging from pancreatic cancer research to the creation of automated cars. Throughout the evening, many Maryland legislators and UMB leaders — including UMB interim president Bruce E. Jarrell, MD, FACS — came to hear their presentations.

The scholars in cohort 5, whose research posters were not ready to present, talked to the legislators about what they have learned during CURE programming, which takes place every Tuesday, Thursday, and Saturday. Shayla talked about an experiment she did to test the amount of iron in cereal using magnets and water. Del. Ben Barnes, who represents the 21st district, was very impressed.

“That’s really neat, and I would have never thought to test that,” he said. “These kids are very well-spoken and bright. They have a great future ahead of them.”

The UMB CURE Scholars also visited Annapolis for Advocacy Day in 2019, but this year’s trip had a new element. Before meeting with Maryland legislators, the scholars took a special tour of the Maryland State House. The tour took them underground through the tunnels that connect the Legislative Services Building to the General Assembly. There, they were able to stand on both the Maryland House and Senate floors. They also learned more about the history that took place in these buildings. This included some recent history that sparked inspiration in the scholars.

“This makes me feel really inspired and proud,” Shayla said. “It makes me feel like if they could do all of this and make a difference in the world, then maybe I can do it, too.”

This is exactly what Gia Grier McGinnis, DrPH, MS, executive director of the CURE Scholars Program, was hoping the scholars would take away from this experience.

“We're always looking to inspire them to think bigger about their career path,” she said. “The end goal of CURE is to inspire the next generation of health care leaders, and work in health policy or health law is a huge component of that.”

Shayla wants to be a pediatrician when she grows up because she wants to work with children. After this trip to Annapolis, she’s considering taking that goal a step further by learning more about how to advocate for children’s health.

“I want these scholars to take away that they are part of this government process,” Haynes said. “This legislative body is a living, breathing body, and we’re not removed from the public. It’s great that they’re here so they can see that if they want to participate now, there are many opportunities for them to do so right now.”

The scholars definitely felt part of the legislative process during this trip to Annapolis. After presenting their posters to Maryland lawmakers, the scholars were invited to sit in the House and Senate galleries during the legislative session. They were met with a round of applause from both floors when the Senate president and House speaker recognized them for their academic achievements in CURE Scholars Program.