Sitting in a balcony at the Maryland General Assembly, a group of middle and high school students from West Baltimore looked down on the House floor waiting to be recognized. House Speaker Michael Busch looked up at the youngsters and led the room in a round of applause congratulating the students on their accomplishments in the University of Maryland, Baltimore (UMB) CURE Scholars Program. 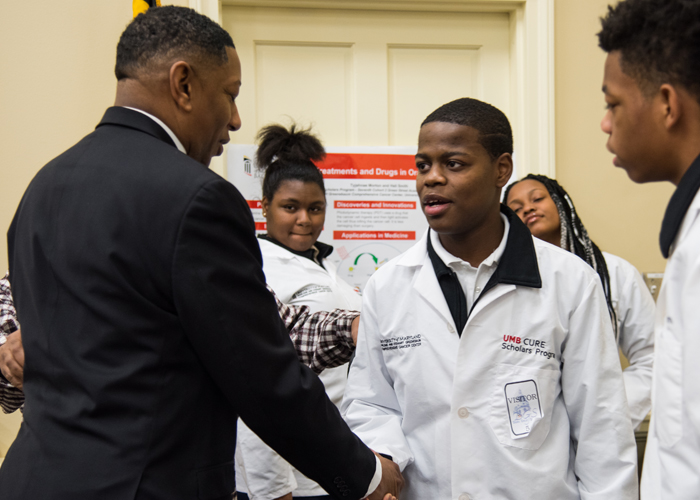 Funded by the National Cancer Institute, the UMB CURE Scholars Program is a unique mentoring program aimed at reducing racial disparities in public health by introducing a pipeline toward careers in STEM (science, technology, engineering, and math) to students in West Baltimore. The program begins in sixth grade and continues through high school, college, and beyond.

Lynijah was one of 36 CURE Scholars who traveled to Annapolis on Jan. 28 for Advocacy Day, giving the scholars an opportunity to learn more about their local government by shaking hands with prominent lawmakers from across the state of Maryland.

The sixth-, seventh-, eighth-, and ninth-grade scholars kicked off their state capital excursion in the House Office Building, where they displayed their unique STEM research posters in the Baltimore City Delegation boardroom. Throughout the evening, state lawmakers filtered into the room to listen as the scholars presented their research.

“I’m not really nervous,” Lynijah stated proudly in front of her poster about how smartphones affect childhood brain development. “I’m excited and I’m happy because usually when we present our posters it’s people we already know. Now that it’s ‘higher-level’ people, I’m just excited because I’ve practiced a lot and I know what I want to talk about.”

The scholars’ research posters ranged in topics from Robotic Surgery to Health Disparities Related to Premature Birth. Each of the scholars exuded confidence in their presentations, looking highly professional in the program’s signature white coats.

Meanwhile, six of the scholars from CURE’s newest cohort of sixth-grade students, who will begin their research this spring, talked to the legislators about their curriculum tracks, which include anatomy, chemistry, MESA, and coding/robotics.

“This trip is really a two-for-one,” explained Robin Saunders, EdD, MS, executive director of the CURE Scholars Program. “This is a chance for the students to see how their state government works, and it’s also a chance for legislators to see, firsthand, the amazing work our CURE Scholars are doing and what kind of research they are studying.”

One of the visiting lawmakers was Del. Jon Cardin, who represents District 11. Cardin said he had heard of the CURE Scholars Program, but this was the first time he was able to meet the scholars face-to-face and he was very impressed with their research.

“I walked in and I had no idea it was going to be middle school and high school students,” said Cardin. “These are very articulate young men and women, and it’s clear that the mentors are teaching them life skills like getting in front of people, talking to them, showing confidence, and getting their work done.”

The mentors are a key part of the CURE Scholars Program. They provide guidance and support to help the young scholars achieve their academic and personal goals. Adrienne Kambouris, an MD and PhD student at the University of Maryland School of Medicine (UMSOM), has been a mentor to Ke’Ron Jones, an eighth-grader in cohort 2, for over two years. Despite the heavy workload from being a full-time student, Kambouris makes her mentoring duties a priority.

“Being a mentor is something that’s important to me,” she explained. “I was in class all day today. I came straight to Annapolis from school to be here with Ke’Ron because this program is important.”

“I was these little girls,” said Kambouris, indicating Ke’Ron and her project partner, Kai-yonna Hughes, also an eighth-grader in cohort 2. “I grew up in Baltimore City, so I know what it’s like to get an education there and I wanted to help the students understand that not only are their dreams possible, but there are people that can show you how to accomplish them.”

Kambouris stood by Ke’Ron and Kai-yonna the entire evening as they presented their research poster on thyroid cancer to several Maryland lawmakers. One of the lawmakers who stopped by was Del. Keith Haynes, who represents District 44A, located in West Baltimore where Ke’Ron and Kai-yonna attend school at Green Street Academy.

After presenting their research to dozens of delegates, the scholars headed across the street to the Maryland State House, where they had reserved seats in the House and Senate balconies. The scholars received a roar of applause from the House and Senate floors as UMB President Jay A. Perman, MD, and Saunders were presented with a plaque of recognition for the UMB CURE Scholars Program.

For Lynijah, this was a very exciting moment as she reflected on all of her achievements and experiences gained through the CURE Scholars Program.

“The CURE Scholars program has changed my life,” she said. “If I didn’t come to CURE, I wouldn’t know everything that I know now, I would not be as advanced in school as I am, and I wouldn’t be as influenced in society. It’s not just an after-school activity, it’s a life program.”