“The BioPark is a bridge,” said Jay A. Perman, MD, president of the University of Maryland, Baltimore (UMB).

“It’s a bridge to private enterprise” and “it’s a bridge to a distressed community by providing opportunities for education and growth,” he continued. 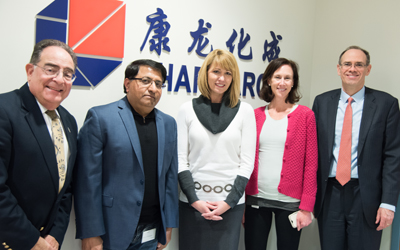 UMB has long been one of the state’s most powerful economic drivers, stimulating $3 billion in economic activity in 2018, up from $2.8 billion in 2016. A significant factor in that growth is the UM BioPark, which occupies 14 acres in West Baltimore providing laboratory and office space to 41 biotechnology companies and over 1,000 employees.

In February, Maryland Commerce Secretary Kelly Schulz experienced firsthand how the BioPark not only encourages collaboration among bioscience companies and the University but also collaboration with the surrounding West Baltimore community, providing pathways to employment and education.

Schulz and a team from the Maryland Department of Commerce spent an afternoon meeting with BioPark tenants, including David Block, MD, CEO of Gliknik; Dan Cramer, president and COO of Wexford Science and Technology; Gerard Fleury, CFO of Paragon Bioservices; and Ashok Tehim, PhD, senior vice president of Pharmaron, to find out how the BioPark tenant companies in partnership with UMB are contributing to the economic success of Maryland.

Key words that came up frequently were “growth” and “momentum.”

James L. Hughes, MBA, chief enterprise and economic development officer and senior vice president for UMB, reflected on how 15 years ago the original concept evolved from the idea of an incubator to a BioPark with the vision of a space that could accommodate larger companies and encourage them to stay in the region.

The first building opened in 2005 and now, along with a second multi-tenant building, both developed by Wexford Science and Technology, the BioPark is home to 1,000 Baltimore-based jobs.

More jobs are on the horizon with new lab and office space that Wexford plans to develop at the corner of Martin Luther King Boulevard and Baltimore Street. “We call it the ‘Gateway’ because it’s not only the first building you’ll see coming into the BioPark, but one of the first buildings you see coming into Baltimore from the south,” Cramer said.

Pharmaron, a premier contract research organization, is one of the BioPark’s oldest tenants with a 40,000-square-foot Clinical Pharmacology Center in its offices on Baltimore Street. Tehim told Schulz his five-year plan includes occupying several floors of the new space in the “Gateway” building to house the growing company.

“When we started, we had 55 employees, then we grew to 80 last year,” he said. Next year he plans to increase his staff to 115 employees in its current space. Tehim said for Pharmaron, which also operates facilities in China and the United Kingdom, coming to the UM BioPark was a strategic choice.

The BioPark is an exciting place for tenant Paragon Bioservices as well. Paragon, which specializes in gene therapy, vaccines, and advanced biologics, has experienced tremendous momentum in part thanks to its location in the BioPark. “The BioPark, because of the resources we have here, we’ve really become a center of excellence right here in this facility,” Fleury said.

“Gene therapy is the next wave in biotech” Fleury explained, noting that the FDA projects there will be 44 gene therapies on the market in the next several years. “There’s only one right now,” he said, pausing for effect.

In addition to the space at the BioPark, Paragon has expanded to a 150,000-square-foot commercial space near BWI Thurgood Marshall Airport in Anne Arundel County.

The new hires are coming from Maryland, the Baltimore-Washington corridor, southern Pennsylvania, and even California.

“What a wonderful thing for Baltimore and Maryland for that kind of talent to be built around your company, to bring this talent in,” noted UM BioPark executive director Jane Shaab, MBA.

Schulz agreed, saying that the workforce and economic growth are an “amazing story.”

“It’s clear over the last decade the BioPark has been an economic driver to the city of Baltimore,” she said. “Biotechnology and life science are extremely important to the governor when he thinks about economic development and moving the state forward, and we will do whatever we can to be supportive.”