It’s a daily struggle for many Americans. Counting down lifesaving pills or cutting them in half to treat chronic illnesses because the cost of refilling a prescription is just too high. Behind the headlines of “Pharma Bro” Martin Shkreli and the astronomical price hike of the EpiPen are real people working to make ends meet and maintain their health.

The 2018 Rome Lecture “Drug Pricing: Problems and Prospects,” presented by the Law and Health Care Program at the University of Maryland Francis King Carey School of Law and delivered by Aaron Kesselheim, MD, JD, MPH, addressed the rising costs of prescription drugs, examined the causes of recent increases, and proposed solutions to a problem that touches all Americans. 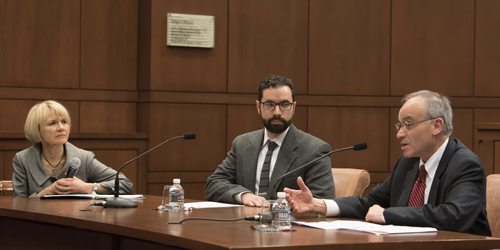 Frank Pasquale, JD, Carey Law professor, introduced Kesselheim, saying, “When we think about the people who are at the intersection of academics and policy who are doing a great deal to really relieve human suffering, I think of Aaron Kesselheim at the very top of that list.”

Kesselheim is director of the Program on Regulation, Therapeutics, and Law in the Division of Pharmacoepidemiology and Pharmacoeconomics, Department of Medicine, Brigham and Women’s Hospital in Boston, as well as an associate professor of medicine at Harvard Medical School. His research focuses on the effects of intellectual property laws and regulatory policies on pharmaceutical drug development, the approval process, and the cost and availability of prescription drugs.

During a lecture that shattered many of the myths advanced by the pharmaceutical industry about drug pricing, Kesselheim acknowledged the important and often lifesaving role drugs play in health care. “The essential policy dilemma,” he said, “is that drugs are the most effective interventions in medicine and the drug industry plays an important role in bringing these products forward. But as drug prices continue to rise, this can make important breakthroughs unaffordable to our patients, leading to bad clinical outcomes.”

Kesselheim noted that drug manufacturers perpetuate the idea that expensive prices reflect the high cost of research and development (R&D) that spurs lifesaving breakthroughs. Not true, said Kesselheim, who said studies show that only 10 to 15 percent of pharmaceutical revenues go to R&D, while 20 to 30 percent goes to marketing and another 20 to 30 percent  goes back to shareholders. “One of the things I hope you’ll walk out of here remembering is that there is no association between R&D and drug costs,” Kesselheim told the mixed audience of pharmacy, law, and medical students and staff.

The most innovative drugs in the past couple of decades have come from publicly funded research and academic centers, he asserted. “If you are ensuring adequate investment through NIH, then you will continue to have these transformative new drug discoveries,” Kesselheim said.

Drug prices are high, said Kesselheim, “because we allow pharmaceutical companies in the U.S. to charge whatever the market will bear.”

“Another thing you’ll hear is that it’s the FDA’s fault why drug prices are so high,” he said. Kesselheim debunked that myth by noting it has become increasingly easier to get FDA drug approval over the past few decades, with one-third of all new drugs being approved on the basis of a single pivotal trial and two-thirds getting approval based on trials of 6 months or fewer. “These days, the FDA is one of the fastest regulatory agencies in the world,” he remarked.

Muth 3: High Prices Reflect the Value of the Product

The idea that drug prices reflect the value of the product is not always true, either, according to Kesselheim. Citing work by Peter Bach, MD, director of the Drug Pricing Lab at Memorial Sloan Kettering Cancer Center in New York, Kesselheim recounted findings that the price of cholesterol-lowering drugs including statins and the more recent PCSK9 inhibitors increased exponentially from the early 1990s to 2015 while providing the exact same amount of LDL cholesterol reduction.

Solutions to the seemingly haphazard pricing of prescription drugs vary, depending on the stage in the drug’s life cycle. If a drug falls in the market exclusivity period, which can last up to 20 years, Kesselheim suggested authorizing Medicare and other public payers to be able to negotiate prices to boost buying power, using a Costco analogy. “If you buy ketchup at Costco, you get a slightly better price because of the bulk discount than you get at the local grocery store,” he said. Additional parts of a multipronged price reduction strategy include training doctors to prescribe in a cost-efficient way and limiting the use of brand-name drug coupons, which he said serve as a pathway to long-term use of expensive drugs.

Kesselheim noted the only competition that consistently lowers drug prices comes from the manufacture of generic drugs that follows the market exclusivity period. “This usually happens because of lawsuits that arise from generic manufacturers to break through the thicket of patents set up during the course of development and the market exclusivity period,” he explained.

While the use of generics seems like a cost-effective solution, it’s not always the case. Brand-name distributors use a number of tactics to extend the life cycle of prized products, including patent term restoration and secondary patents that slightly adjust drug formulations. He sees hope in the Patent Trials Appeals Court, created in 2011 to administratively review patents approved by the Patent and Trademark Office. Kesselheim also sees a light at the end of the pharmaceutical tunnel in the bipartisan CREATES Act (The Creating and Restoring Equal Access to Equivalent Samples) of 2017, federal legislation that would make it illegal to withhold samples when generic manufacturers request them.

During the final period of a drug’s life cycle when there might be multiple generics competing in the market, Kesselheim reminded the audience, “Just because a drug is generic doesn’t mean it’s cheap.”

He continued, “It isn’t until you get four or more manufacturers on the market that you start getting prices that drop to 50 percent or below the brand-name price.” One suggestion to help lower generic prices is to import them from other well-regulated markets such as Canada, Australia, and Japan. Noting that other industrialized nations spend $400 per capita on average a year on drugs, in comparison to the United States’ $850 per capita Kesselheim, said, “This is a way of trying to address these issues, and there is ample evidence that we can trust that the drug supply is safe in a lot of these countries.”

Given all of the obstacles to obtaining fair and transparent drug pricing, it would be easy to get discouraged, but Kesselheim remains optimistic, in part because of the sheer volume of people affected. “Three-quarters of Americans agree that drug prices are unreasonable,” he said. “This is a Democrat and a Republican issue that everybody can agree on.”

The lecture was followed by a panel of experts on pharmaceutical drug pricing moderated by Diane Hoffmann, JD, director of the Law and Health Care Program. Panelists included:

The Stuart Rome Lecture was established in 1984 to honor the memory of Stuart Rome, a prominent attorney, community activist, art patron, and humanitarian in the Baltimore area.