During prenatal development, the brains of most animals, including humans, develop specifically male or female characteristics. In most species, some portions of male and female brains are a different size, and often have a different number of neurons and synapses. However, scientists have known little about the details of how this differentiation occurs. Now, a new study by researchers at the University of Maryland School of Medicine (SOM) has illuminated some details about how this occurs. 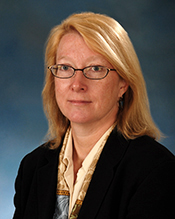 Margaret McCarthy, PhD, professor and chairman of the Department of Pharmacology, studied brain development in newborn rats. She found that giving estradiol, a testosterone derivative, triggers a mechanism by which certain genes in the brain are “unsilenced,” allowing them to initiate the process of masculinization. This process involves a group of enzymes known as DNA methyltransferases, or DNMTs, which modify DNA to repress gene expression.

The paper was published in the latest issue of the journal Nature Neuroscience.

“Nobody has ever shown that this is how the process works,” says McCarthy. She collaborated with Bridget Nugent, PhD, who is now a researcher at the University of Pennsylvania. “This gives us a new understanding of how gender is determined in the brain.”

McCarthy and Nugent also found that inhibiting DNMTs has powerful effects, even outside the usual window of development. During prenatal development there is a restricted time frame during which the brain takes on male or female characteristics. Scientists had thought that once this window closed, it could not be reopened. But the two researchers found otherwise. They succeeded in transforming the brain of a female rat after the window had closed, giving it the characteristics of a male rat brain.

McCarthy and Nugent injected DNMT inhibitors into a specific region of the female brains, a region known as the preoptic area, or POA. In every species that’s been studied, including humans, the POA plays a key role in governing male sexual behavior. The injections occurred after the first week of birth, the time when the window for brain sexual differentiation was thought to have been closed. Despite this, the preoptic area in these animals was transformed, and took on structural characteristics of a male rat. The female rats also behaved differently, displaying sexual behavior typical of male rats. In another experiment, they genetically deleted the DNMT gene in female mice; these animals also showed male behavior patterns.

“Physically, these animals were females, but in their reproductive behavior, they were males,” says Nugent. “It was fascinating to see this transformation.”

McCarthy has focused much of her work on the neuroscience of sex differences. In previous research she found sex and gender differences in levels of a protein associated with language acquisition and development. This finding may be associated with higher levels of communication among females in some species.

Intriguingly, the latest study also found that inflammatory immune cells known as microglia appear to play a role in masculinization, in part through their production of prostaglandins, a neurochemical normally associated with illness. In recent years, scientists have increasingly realized that the immune system is integral to the development of the brain. McCarthy and her group are the first to show that it is also important for establishment of sex differences in the brain. The current discovery is another piece in that puzzle, showing that DNMT enzymes control expression of genes that play a role in inflammation and immunity, and also in the sexual differentiation of the brain. McCarthy is now doing additional research on the links between the immune system and brain sex differences.

“Professor McCarthy’s work provides new insight into brain development and gender,” said E. Albert Reece, MD, PhD, MBA, who is also the vice president for Medical Affairs, University of Maryland, and the John Z. and Akiko K. Bowers Distinguished Professor and Dean of the School of Medicine. “She has spent years working on this area, and this is just the latest discovery in her impressive career.”