Shania Kerina was pregnant — and homeless — when at least once a week she received a call from Angelise Shelby, MSW, LGSW, a social worker with B’more for Healthy Babies (BHB), the outreach program operated by the University of Maryland School of Social Work’s (UMSSW) Promise Heights initiative. 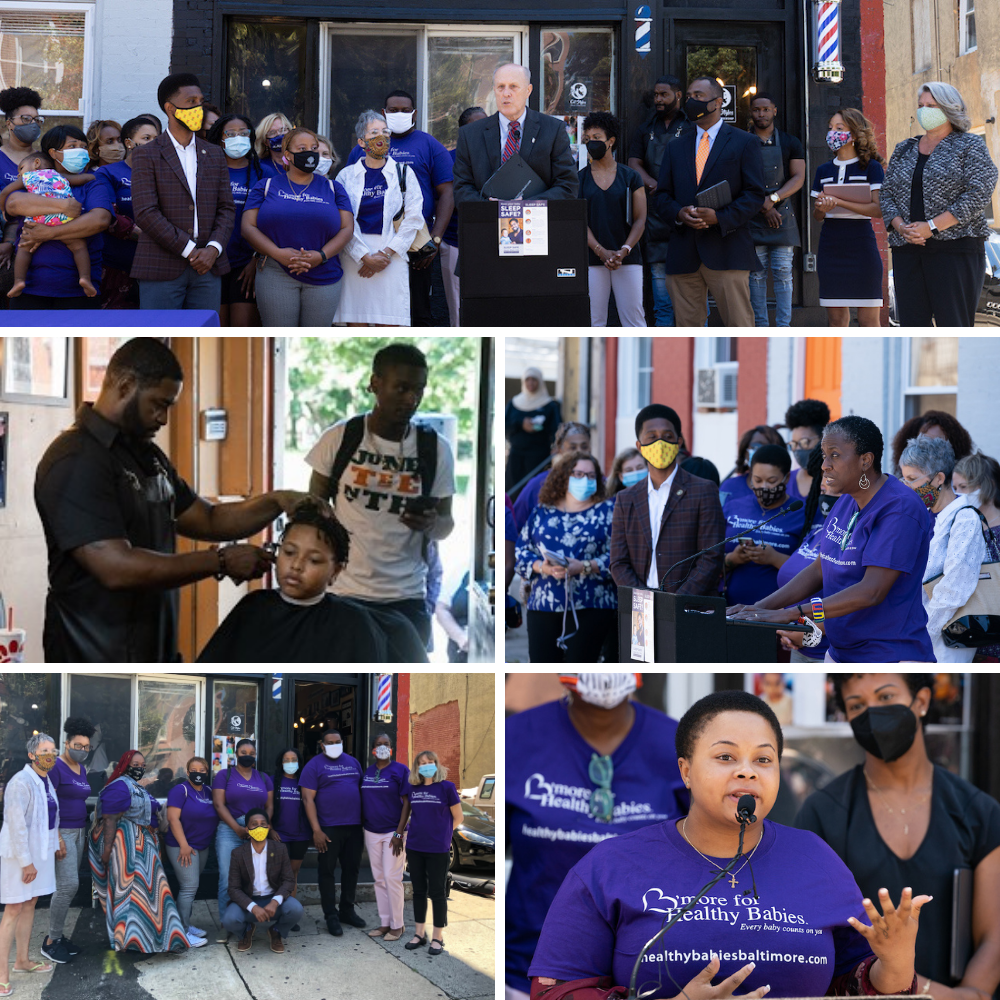 Top: University of Maryland, Baltimore President Bruce E. Jarrell praises B’more for Healthy Babies (BHB) and its community partners. Middle: (L) Antoine Dow, owner of Cut Styles, cuts a patron’s hair; BHB Director Stacey Stephens thanks the community for its support. Bottom: BHB staff with Mayor Brandon M. Scott; Shania Kerina explains how BHB had a direct impact on her and the life of her son.

“I was house to house. I was in and out the hospital from stress. I was bleeding a lot,” Kerina said. “I was so stressed that I just would ignore her call.”

At the time, Kerina knew little about BHB, how the staff conducts aggressive outreach using door-to-door, word-of-mouth, and other methods to build family and community trust and increase community awareness of its prenatal and postnatal support services. She didn’t know BHB would be credited for achieving a record-low infant mortality rate for Black infants in her neighborhood of Upton/Druid Heights.

Eventually Kerina saw a flyer for a “Spa Night” hosted by BHB for pregnant women and new moms in her neighborhood. Why not go, she thought. After all, dinner was included.

“The room was packed just with pregnant moms, new moms, and they had a room where they were watching the kids. They supplied dinner for us at the end. And I don’t even think they knew that was the only meal I had that day. And I was pregnant at eight months,” Kerina said.

Now the proud mother of a son, 1½-year-old Kimani, Kerina shared her story at a June 17 news conference celebrating a major milestone in the work of BHB and its partners. After more than a decade of sustained investment in Upton/Druid Heights, the infant mortality rate dropped by 75 percent to 3.8 deaths per 1,000 live births. This rate is lower than the city’s overall white infant mortality rate (4.4 in 2019) and comparable to Baltimore communities that are far more wealthy and affected far less negatively by social determinants of health. The outcome is directly tied to years of local investment, outreach, and education through the work of the BHB program, officials said.

When BHB launched in 2009, Upton/Druid Heights, with a population that is among the city’s least wealthy and almost entirely Black, had a higher rate of infant mortality than the city overall.

“It is no secret that there is a distinct significant racial disparity in infant mortality with Black babies typically dying between two and five times the rate of white babies,” said Mayor Brandon M. Scott, who hosted the news conference. “This is an unfortunate dynamic that our city knows all too well. In 2009, 15 out of 1,000 infants in the neighborhood of Upton/Druid Height did not survive birth. But these are more than just statistics. It’s 15 lives that will never have a chance to reach their full potential to watch Saturday cartoons, to eat crabs, dress up for Halloween. While the deck is already stacked against Black children growing up in these neighborhoods, 15 of those precious lives won’t even have an opportunity to dream or fulfill their potential.”

“The work in Upton/Druid Heights is absolutely incredible,” Scott said. “I want to thank Director Stephens and B’more for Healthy Babies for this measurable impact in this community, and subsequently in Baltimore as a whole.”

“This isn’t just an accomplishment relative to Baltimore. This is a national accomplishment, where we have done a spectacular job,” Jarrell said. “The hard part comes up now. How do we make it so that those infants now blossom, reach their potential, and become great contributors to this city? That's the challenge. The other challenge is, of course, to keep our federal government helping us to fund this great program. And so, Mr. Mayor and all of our delegation, we’re going to need your help to make this kind of funding that goes to social determinants of health really successful.”

Stephens noted a central part of BHB’s success has been cultivating trust and respect in the Upton/Druid Heights community.

“We owe a tremendous thank you to Black women who partnered with us during the vulnerable but joyous time of pregnancy and parenting young children,” Stephens said, addressing moms from the community who gathered on the sidewalk, joining program staff in donning purple BHB T-shirts, outside Cut Styles on McMechen Street, where the news conference was held.

“During this period, we have deeply listened to Black women as you have transformed educational, perinatal groups into spaces that foster social connections and supports,” she said. “We admire how you have emerged as strong advocates and community organizers in your community, which has even led to new entrepreneurial and employment opportunities. We celebrate you as you lead and sustain this ongoing work.”

Stephens especially thanked Dow and other barbers in the community. For eight years, barbershops and barbers have been instrumental in providing space in their shops to share BHB messaging around ways to reduce the infant mortality rate.

Dow met Stephens several years ago when she walked into the barbershop to educate men about Sudden Infant Death Syndrome (SIDS) and the importance of having babies sleep on their backs.

“At the time, my son was a preemie,” Dow said. “So I was laying him down incorrectly. And what she did basically saved my son's life by giving me the information about ‘alone, on the back, in the crib’ [a SIDS awareness campaign]. We still have a long battle. I'm not going to celebrate yet because I’m working with a lot of fathers right now who have new children.”

The barbershop’s TV plays BHB-created videos about safe sleep and other topics related to the health and wellness of children and families.

Meanwhile, mom Kerina has since become one of BHB’s “Community Achievers,” a group of new moms that assembles and delivers care packages of helpful items to support new parents.

“They are doing so much in the community. You know, not only are they saving lives, but they’re building families,” she said. “Without B’more for Healthy Babies, a lot of people would just be S.O.L.,” she added, as the mayor laughed at the colloquial expression for bad luck.

“I’ve always wanted to say that at a press conference,” Scott joked.