The Power of Difficult Conversations

“I think it’s fair to say that America’s more than ready to unburden itself on race,” University of Maryland, Baltimore (UMB) President Jay A. Perman, MD, declared to an audience of nearly 200 UMB alumni, faculty, and staff, and others gathered at Baltimore’s historic Parker Metal Building on June 12 for “An Evening with Michele Norris.”

In his introduction of the featured speaker, Perman reminded the audience of Norris' long career as a staff writer with several major newspapers and later as a reporter for ABC News in Washington, D.C. The audience responded with laughter when Perman spoke of his personal sadness when Norris ended her 10-year run as cohost of National Public Radio’s premier news program, “All Things Considered.” “I was sharing with Ms. Norris the fact that my drives home are lonelier,” he said solemnly. 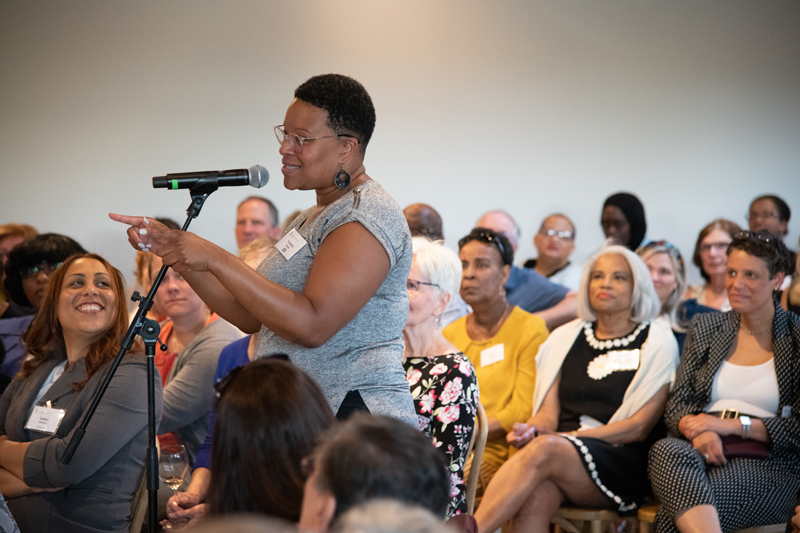 The audience reacts to Veronica McBeth, MSL '18, as she explains her six Race Card words: "Tell Me What White Sounds Like."

It was during her time at NPR that Norris began The Race Card Project, an effort to explore race, diversity, and inclusion by asking Americans to distill their experiences, thoughts, and observations down to six words. “The project has collected tens of thousands of submissions since 2010. Some of them are hopeful. Some are angry. Some are heartbreaking. All of them are brave,” Perman said.

Norris explained that the concept of The Race Card Project came out of research for her book, The Grace of Silence: A Memoir. The book tells the surprising stories of the impact of race and racism on her own family, many of which she had been unaware. Norris described how her father returned to Alabama from military service in the 1940s and sought to register to vote. At that time, state law required applicants to pass a test of knowledge of the Constitution. One day, police prevented Norris’ father from attending preparation classes, she said, and in an ensuing scuffle he was shot in the leg. Older family members never told Norris and her siblings about the incident, she said, “because they didn’t want us to cradle their anger.”

“When I went to research this book, I learned so much about my family, but also so much about America, that as much as I appreciated that knowledge I was terrified that when I went out on this 35-city book tour that I would be asking people to engage in a conversation around race,” she said. “And I didn’t think America was ready for it and so that’s why I came up with this concept of asking people to share six-word stories.”

The biggest obstacle to open discussions of race, Norris explained, is trust. “There is an actual cost to having that conversation and speaking honestly. You feel that if you speak your truth, you might offend someone, you might be viewed forever through that lens,” she said. “If you want to get to the corner office, if you want to get to a position of leadership, being the person who talks about race, who fosters the honest conversation about race, is not always the popular position to take.”

The Race Card Project helps to bridge that trust divide by keeping the conversation narrow to start — just six words — and asking people to fill in the back story. “That’s where we were able to tap into America’s DNA around race and culture,” Norris said.

One example of a race card submission drew gasps from the audience and cries of “That’s remarkable” and “That’s really disgusting” — Black Babies Cost Less To Adopt.

“Every step of the way in this research, I just really had a hard time with this one, but I realized what we were doing is uncovering hard truths,” Norris said. The back story, she explained, was that the writer had a black teenage son via transracial adoption, and she worried that he would learn something heartbreaking later in life.

“What she was talking about we confirmed in our research,” Norris explained. “The fee structure varies on the race of the child. If you want to adopt a child who is white, the fees are much higher. If it’s a Hispanic child or mixed-race child, it’s kind of mid-range, and it goes down and down until you get to black boys and the fee structure is the lowest.”

The reason for this, she added, is that there are more children of color than families willing to adopt them, so agencies create an incentive to promote adoption. “Everybody in the process we talked to told us that it is a reflection of our values,” Norris told the audience. “The economics around that process is something that holds a mirror up to us ... and asks us to look at ourselves and what we see, and it started with just six words.”

Although always poignant, not all of the discussion was as gut-wrenching. Norris drew knowing laughter when she announced the words on her own card — Lady, I Don’t Want Your Purse — opening a discussion on an all-too-common experience. “Have you ever been to a space and a person of color walks past you and you don’t even know why you do it, and you pat your wallet or clutch your purse a little bit?” she asked.

Looking back to the election of America’s first black president and concomitant hopes for a “postracial” society, Perman alluded to the country’s current polarized politics and rhetorically asked Norris, “We got that wrong, didn’t we?”

“I have to tell you, at the time I was saying, ‘Wait a minute, pay attention,’ ” Norris jumped in to say. “I was born in 1961. I have no problem telling you how old I am — the same age as Barack Obama, by the way. So, we were born into an America where we could not walk into a restaurant, we could not order a ham sandwich. Laws dictated where we could eat, sleep, get our schooling. And we have, as a country, denied agency and authority to people of color or people who were outside of mainstream culture, and we think that if a black family moves into the White House, it’s done? Oh, no, put your seatbelts on.”

Rapid demographic change, she noted, “to some people sounds promising and like a bright horizon, and for some Americans it sounds like a thunderclap that brings a change that is scary.”

Audience member Veronica McBeth, MSL ’18, offered her own six words — Tell Me What White Sounds Like — and related her experience as a black woman who sometimes encounters what she called “the shock and awe at who they’re meeting with, with who they talked to on the phone.” McBeth drew laughter when she added, “I have gotten excellent loan rates, however, because of my name and my voice,” but quickly returned to the serious topic of how to push uncomfortable conversations about diversity, equity, and inclusion.

“I’m on a board that presented what I thought was a fairly benign quiz about what you thought about diversity and inclusion and it quickly got tabled, tabled to the point where they said, ‘Oh, this is uncomfortable.’ Well that’s the point, it’s to be uncomfortable. So how do you resurface the conversation?”

In answer to that question, Norris left the audience with some key suggestions. “Let people know you’re going to be uncomfortable at times,” she offered. “Find allies. ... Find people who can be at the table who can affirm and validate what you’re trying to do. And then try to help people understand this notion that these conversations don’t just accrue benefits to you. That perhaps the people who are most uncomfortable have the most to gain from the conversation and help people understand that there’s an institutional benefit to doing the work. If you can navigate a difficult conversation and keep people at the table, you will build this trust dividend that you can cash in later.”